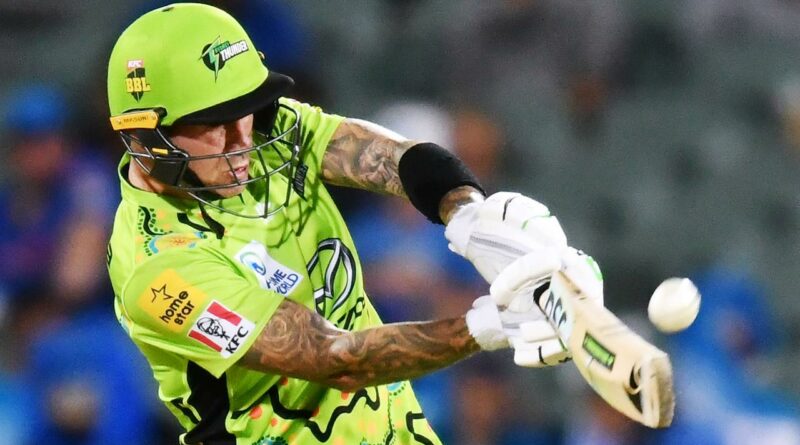 Alex Hales continued his incredible BBL run spree and push for an England return as Sydney Thunder booked a finals slot at Adelaide’s expense in Adelaide.

The Thunder chewed up a 116, rain affected match target, in 12.1 overs to bank a bonus point win and third spot on the ladder.

Having crunched 110 against the Sydney Sixers here on Friday night, Hales continued his quest for an England recall with another display of brutal hitting and 161 strike rate.

The Bash Boost point was available after seven overs with the Strikers only posting 38 at the half way mark. Pursuing the Boost point caused a 4-15 collapse and total Thunder unravelling on Sunday. This time the Thunder held their nerve.

Hales reached 49 with a blow into the western stand that was a BBL record breaking 29th six of the season. Rangy opener Hales’ 30th six capped a third half century this campaign. It’s cliche, but this was a Hale storm for Adelaide with Hales now on a league high 535 runs this season.

The humid conditions were tailor made for Daniel Worrall and the swingman up-ended Khawaja’s stumps for the opener’s maiden BBL duck but that was it for Adelaide.

Jake Weatherald (80, 47) found the timing, poise and control that was hard on a night made for bowlers with a 12th BBL half-century when it counted. Undefeated Weatherald’s one-man crusade accounted for 80 of a 4/115 total.

Weatherald carried his bat while featuring in a crucial, rearguard stand of 63 with ever reliable Jon Wells (21, 18) that ensured a respectable total. The Strikers had slumped to 3-35 inside seven overs with Alex Carey (2), Phil Salt (1) and Travis Head (2) in the sheds.

It was Weatherald’s third half century of the competition for a tally of 401 runs at a purring 140 strike rate. It was a sterling effort to contribute eight boundaries and four sixes against an attack with yorker king Brendan Doggett (1-19), New Zealand international Adam Milne and Nathan McAndrew (1-8) firing.

Big Bash: A massive six launched into the upper decks of the Adelaide Oval by Sydney Thunder star Alex Hales was taken brilliantly by a fan in the crowd….

Big Bash: A massive six launched into the upper decks of the Adelaide Oval by Sydney Thunder star Alex Hales was taken brilliantly by a fan in the crowd.

Only the Sydney Sixers and Perth Scorchers had locked in their finals pathway, joint top with 32 points. The Thunder can plan for a second title shot while Adelaide must sweat on the Australia Day triple header featuring Brisbane (25 points) against Perth, the Renegades hosting Hobart (26) and the Stars (24) taking on the Sixers. A Brisbane, bonus point upset win against the Scorchers could punt Adelaide from the finals.

Jake Weatherald stood up for the Strikers in a losing effort. Picture: Getty ImagesSource:Getty Images

Weatherald excelled under immense pressure. The beauty of Weatherald is he’s such an uncomplicated character that grand occasions ruffle the left hander as much as beach cricket.

Weatherald is a big game performer having become the first batsman to post a ton in a BBL final to deliver Adelaide’s inaugural title in 2017-18. Weatherald also posted half centuries 66 and 96) in his fourth first class start – the 2015-16 Sheffield Shield final against Victoria. Weatherald produced a matchwinning century, 116, in the 2017-19 one-day elimination final against Victoria.

Big Bash: Jono Wells was in a world of hurt when he was first struck in the helmet by a Nathan McAndrew bouncer before he collided with the bowler while taking a single….

Big Bash: Jono Wells was in a world of hurt when he was first struck in the helmet by a Nathan McAndrew bouncer before he collided with the bowler while taking a single.

Weatherald has gone up and down Adelaide’s order in unprecedented fashion but looks his best when opening with Carey – the second most prolific opening partnership in BBL history.

“He has showed his class, Jake Weatherald, had batters falling around him,” said Fox Cricket expert Brad Haddin of the Strikers opener.

Spin wasn’t expected to influence the result on an arena that soaked up 21 millimetres. Tweakers Tanveer Sangha (1-20) and Chris Green (1/19) had snared No.3 Salt and skipper Head in a serious blow to Adelaide’s hope of a winning total. Yet, Weatherald would come for Green, taking 15 off his second over with two sixes.