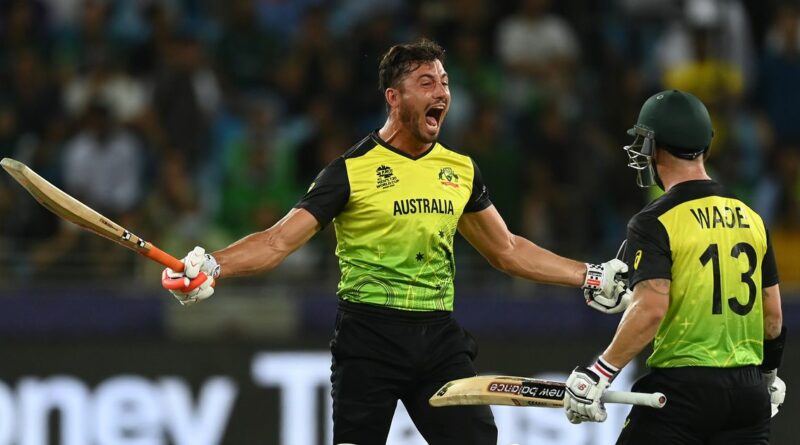 Australia produced a stunning performance to beat Pakistan and book their place in the final of the T20 World Cup.

Adam Zampa and David Warner both impressed for Australia, but it was the finishing of Marcus Stoinis and Matthew Wade which was key as they completed a five-wicket win over Pakistan to set up a blockbuster clash with New Zealand in the final.

The pair are among the leading run scorers at the tournament and were able to continue their good form in the semi-final, putting on a 71-run partnership before Adam Zampa made the breakthrough.

Babar was the man dismissed, getting caught by David Warner at long-on for 39 after an attempted slog sweep.

It was an important wicket for Australia and Zampa was undoubtedly the pick of their bowlers, finishing with 1-22 from his four overs.

However, Babar's dismissal brought Fakhar Zaman to the crease and the left-hander teed off alongside Rizwan.

The pair took 21 runs off one over from Josh Hazlewood, both smacking the seamer for sixes, before Mitchell Starc dismissed Rizwan for 67 in the following over.

Zaman was able to finish the innings in style though, striking four boundaries in the final three overs to push Pakistan up to a total of 176-4.

In response, Pakistan got off to the perfect start when Shaheen Shah Afridi trapped Aaron Finch LBW for a first ball duck.

Afridi thought he also had Mitchell Marsh the following ball, but umpire Chris Gaffaney gave the all-rounder not out and a review had it umpire's call on both impact and hitting the wickets.

Australia were able to kickstart their chase in the fourth over, with David Warner taking the attack to left-arm spinner Imad Wasim.

Warner struck a six and two fours off Wasim in an over that cost Pakistan 17 runs and saw the momentum swing back into Australia's favour.

It was followed up by another expensive over from Haris Rauf which went for 14, with Marsh smashing a six and a four off the quick.

Grosvenor Sport is offering new customers £30 in free bets when you bet £10 on the T20 World Cup!

Register with Grosvenor Sport, place a £10 bet on any World Cup match and your account will be credited with £30 in free bet tokens!

The pair put on a 51-run partnership and were threatening to go big, before the introduction of leg spinner Shadab Khan brought the wicket of Marsh.

The all-rounder does not have a great record against leg spin in T20I cricket and he was caught in the deep by Asif Ali for 28 after top edging a slog sweep.

Pakistan then began to pick up regular wickets, with Shadab getting Steve Smith caught at midwicket for five and then getting the key wicket of Warner nine balls later.

Warner was looking very dangerous, but was given out caught behind for 49.

Replays showed that there was clear daylight between bat and ball and ultra edge did not pick up a nick.

However, Warner did not even think about reviewing the decision and it was an error which looked as though it might end up costing Australia the match and a spot in the final.

Shadab continued his impressive display with the ball, getting Glenn Maxwell caught at deep square leg for seven and ending his spell with the outstanding figures of 4-26.

With 22 runs needed off the final two overs, Hasan Ali dropped a chance to send Wade packing and could only watch on as he blasted Afridi for three consecutive sixes to earn Australia a showdown with New Zealand in the final.

With both favourites England and Pakistan now out of the tournament, we are set for a fascinating clash between two neighbours.

Neither Australia or New Zealand have won the tournament before and, if either semi-final is anything to go by, the final will be a must-watch game of cricket.

Woakes urges England selectors to give Hales a second chance