Australia face a dangerous Bangladesh side containing the World Cup’s leading run scorer and buoyed by wins over West Indies and South Africa, knowing that victory would all but secure a place in the semi-finals. FOLLOW LIVE!

David Warner has yet to hit top form for Australia at this World Cup – will that change against Bangladesh.

Shakib’s brilliant century helped the Tigers complete the second-highest World Cup chase in a seven-wicket win over the West Indies in Taunton on Monday.

The 32-year-old allrounder, who is the tournament’s leading run-scorer with 384 runs, also hit a century against England earlier in the tournament and has been among the wickets.

FOLLOW ALL THE ACTION ON OUR LIVE BLOG BELOW

When Bangladesh beat Australia in a 2005 one-day international in Cardiff, it was widely regarded as one of the biggest upsets in cricket history.

But they are now an established force and, having beaten both South Africa and the West Indies already at this tournament, they are pushing for a semi-final berth.

Alex Carey and Australia know the threats posed by Bangladesh

“We’ve obviously put our time into Shakib and all the players at the top of the order as well as their bowling,” Carey said on Wednesday.

“He’s in probably career-best form with the white ball. So we sort of know the areas and line and length we want to bowl to him and I guess out there we’ll assess the conditions as well.

“We leave that up to the bowlers and the captain to do that, but he’s one guy we want to get out early.”

Australia, despite a defeat by India, appear to be well on course for a semi-final berth, with four wins from their five matches in the 10-team round-robin phase so far.

But Carey said there was still room for improvement.

“We obviously like to take wickets up front, there have been times we probably would have liked to finish off innings with the bat,” he said.

“Although we’re getting results, we’re still striving hard to try to find that perfect game and put a full 50 or 100 overs together.

But the guys are working really hard and we’re aware of the areas to keep improving.”

All-rounder Marcus Stoinis could return tonight after missing Australia’s past two matches with a side strain.

Watch every match of the 2019 Cricket World Cup on FOXTEL, via Foxtel IQ, Foxtel Now or stream on Kayo Sports 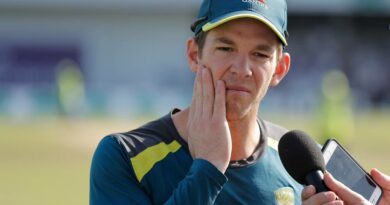 England to groom emerging pacemen by taking them on 'secondment'