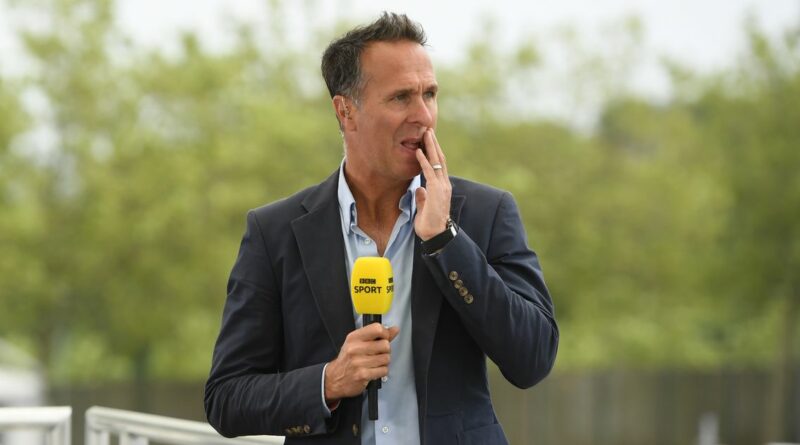 Michael Vaughan 's regular slot on BBC Radio was axed on Monday night as the fallout continues from his alleged involvement in the racism scandal which has embroiled Yorkshire County Cricket Club.

But he was suspended from the programme after he was accused last week of making a racially insensitive comment towards Azeem Rafiq and other Asian players.

It was expected that he would be replaced by someone else who would join Tuffnell for the show.

However, it did not air at all and was instead replaced by a show in which the T20 World Cup was discussed by England bowlers Mark Wood and Tymal Mills.

Vaughan is accused of telling the Asian players including Rafiq that there were "too many of you lot, we need to do something about it" in 2009, an alleged remark which was heard by former Pakistan cricketer Rana Naved-ul-Hasan.

In response to the claim, the ex-England captain wrote in his column for the Telegraph : "I completely and categorically deny that I ever said those words.

"I will fight to the end to prove I am not that person."

The BBC said its decision to take Vaughan off the air was in order to remain impartial while these events play out.

"The show focuses on topical discussion around current cricketing matters and, given his involvement, we need to ensure we maintain impartiality," a statement from the broadcaster said.

While he will not be heard or seen on the BBC, Vaughan is still set to feature on UK airwaves this year as he is part of Fox Sports' Australian coverage of The Ashes.

BT Sport, which holds the broadcasting rights for the series, will be using the Fox Sports feed throughout the competition.

The racism scandal first hit the headlines when it emerged former Yorkshire bowler Rafiq was repeatedly referred to as a P*** by a team-mate.

Despite a report suggesting it had been enough to break the Equality Act, a Yorkshire CCC panel dismissed the idea that the player had been offended and referred to it as "banter".

It led to a swathe of sponsors cutting ties with the club, the ECB levying sanctions and the resignation of former chairman Roger Hutton.

New chair Lord Patel has issued a public apology to Rafiq, and revealed the club has settled an employment tribunal with the 30-year-old.

New Zealand vs England: Sam Curran leads the way as bowlers fight back after collapse