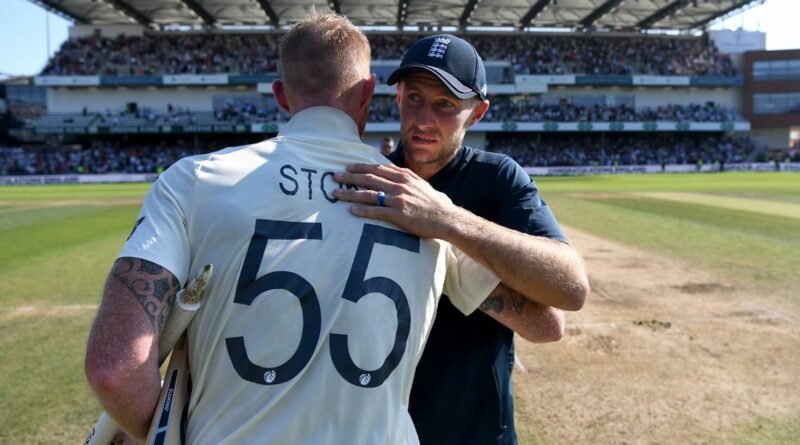 New England captain Ben Stokes has insisted he will be leaning on advice from his predecessor Joe Root as he attempts to resurrect the side after a poor run of results in Test cricket.

England have failed to win any of their last five Test series for the first time since they played their first Test match back in 1877, with a 1-0 series defeat to the West Indies proving to be Root's final one in charge as he resigned as skipper last month.

Stokes was the obvious replacement for Root and was officially unveiled as his successor last week. The pair are close friends and Stokes paid tribute to Root after he was appointed captain, saying: "He has been a massive part of my development as a leader in the dressing room, and he will continue to be a key ally for me in this role."

Root, meanwhile, posted a touching message on social media, writing: "Always got each other's backs. Congratulations mate, I'll be right with you every step of the way".

And, while speaking to the media for the first time as captain, Stokes told the BBC that Root has already offered him advice on how to deal with the "pressure" that comes with his new job. "You don't want to be putting too much pressure on yourself outside of when you're when you're out in the field performing," Stokes said.

"There are lots of things to consider like getting the right coach, for example, and the right management, to take all the added pressures that come with it off my shoulders. And Joe has said that to me.

"I'm going to be using him going forward, especially in my first few months because of how long he did the role for and how good he was doing it. I'll be learning from Joe about things to keep on top of and also things that he maybe thought he could have done better as well."

"And I've always said I'm not trying to be either of them, just Ben Stokes. It's naive and stupid to think that now because I'm captain my way is the only way and no one else has a voice or an input.

"Because I feel that's one thing that a leader needs to do. Always make sure that other people around them feel valued and have a voice."

Stokes also confirmed that both James Anderson and Stuart Broad are in his plans for the summer, stating the best way for England to win games is to simply "play your best 11" and that the pair will be "up for selection" for the first Test against New Zealand next month provided they are fit.

The 30-year-old also reflected on the 2017 incident in Bristol – insisting he does not see anything he has been through as "a negative". "I hope that now because I'm England captain, I’m not seen as a different person to the people who I've played with," he added. "I feel as if I've always been someone who anybody can come and speak to. I see everything that I've gone through as a positive and you can relate to people if that is good or bad.

"I don't see anything that I've gone through as a negative. If anything, I see it as a way that I can always try and help them."

As far as how he wants to shape his team, Stokes is solely focused on how England can win Test matches. "A very good starting point for me is I want selfless cricketers who make decisions that are based on winning the game of cricket for England," he said.

"Because at the end of the day, the most important thing for me is winning. I want to be a part of a team that has that real mentality and isn't going to take a backward step."

The No.1 problem for sports around the world