Home » Сricket » Bloodied but not bowed, India refuse to be beaten 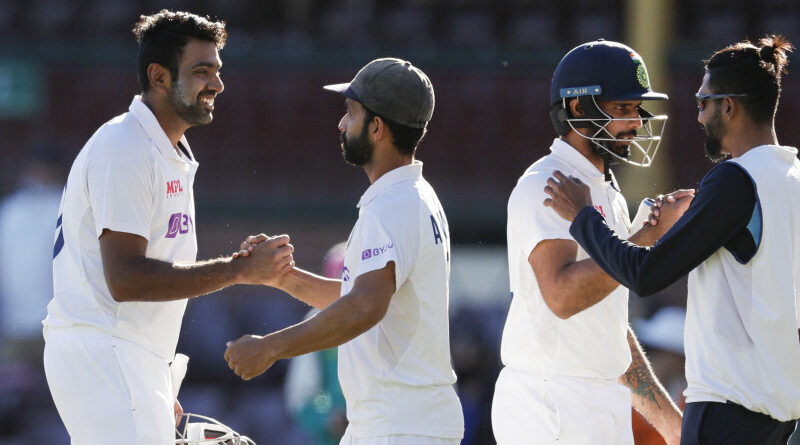 Here's a team that won't or might not be playing for India at the Gabba on Friday: KL Rahul, Agarwal, Kohli, Vihari, Jadeja, Saha, Ashwin, Umesh Yadav, Shami, Bumrah, Ishant. It would win many games of Test cricket.

All except Rahul and Ishant Sharma have appeared in this series. All except Virat Kohli and wicketkeeper Wriddhiman Saha are injured. Verily, India are straggling into the decider.

Drama swirls around the combatants. There's sledging, still seemingly Australia's default. There’s crowd abuse, and to think that after all the trouble to let a crowd into the SCG at all, it had to be that uncouth lot. There's a persistent undertone of racism. There's a molehill, turned mountain, turned puff of dust by Steve Smith’s heel. 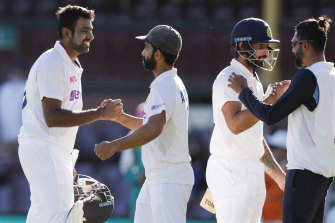 The tourists celebrate after the third Test ended in an unlikely draw. Credit:AP

The Indians have not been faultless. They pulled a swiftie with their wicketkeepers in Sydney, and were at least undiplomatic when complaining about the service in Brisbane. There are a lot of people in the world right now who would love the chance to make their own beds. But both teams have been living unnatural lives for a long time, and can be afforded sympathy to that extent.

Previous Indian teams might have buckled by now under this accumulation of deadweight of accident, incident and insult. This one were written off early. They had to win the first Test. They had to win while they still had Kohli. They could not win after being skittled for 36.

Yet somehow they have kept their dignity and their shape. Somehow, they have stayed true to their mission. Batting or bowling, they've been hard to budge. More broadly, nothing has distracted them. In a country that other visiting teams find is always in their faces, they've carried themselves as if unsurprised and unfazed by anything.

In an IPL world, there are fewer alien lands. Latter-day Australia play better in India and India much better here. They won last time, and won the most recent day of this series, and begin the fourth and final Test as the Border-Gavaskar trophy-holder incumbent. It will have to be prised out of their grasp.

The fourth Test has all the makings of an anti-climax. After a riveting series, so much is expected of this finale that it is bound to disappoint.

Australia are showing their own strains. The ill-starred Will Pucovski is out again, David Warner is playing hurt. Depending on the fall of the coin, the bowlers might find themselves on a three-day turnaround after a 131-over fourth innings in Sydney. That night, Nathan Lyon took an ice-bath for the first time in his 99 Tests. The wear on Australia, mental and physical, was apparent that day.

This becomes a tough gig. Three times in recent history, Australia have had to back up quickly after 100-plus overs and each time they have been well beaten, twice by England and once by South Africa. Australia's injury toll is lighter by far than India's, but coach Justin Langer is aware of the incipient danger. Typically, he puts a martial face on it, saying he always knew and relished the idea that this series would be a case of last man standing.

It may well be. As the cricketers rolled hub-by-hub from the IPL into two white-ball series in Australia, into the Border-Gavaskar rubber, the injury toll has been severe. It is a problem observable in other sports, too, and as the pandemic lingers might lead to a radical rethink of training squads and regimes.

At home, Australia at least have been able to manage and renew their manpower. India have been decimated, helplessly. As matters stand, they may set out on the Gabba on Friday with no spare batsman and a four-man pace attack whose aggregate experience is three Tests and 10 balls.

It ought to be no contest. But that's what we thought after 36 all out.

It is a peculiarity of the formulation of sport – be it series, championship or tournament – that the pointy end often is also the most blunt, when the fatigue of long competition is at its greatest. The fourth Test has all the makings of an anti-climax. After a riveting series, so much is expected of this finale that it is bound to disappoint.

The Gabba will be hot and humid and storms are predicted. Both teams are battered in their own ways, but Australia on their most fruitful ground ought to be able to soothe away the disappointment of Sydney. India can do nothing about their bodily depletion. Absent a rash of first-day injuries, Australia hold all the cards.

There's still the Border-Gavaskar trophy to claim, and points towards a place in July's inaugural Test championship final, but India will also have half a mind for a four-match home series against England which begins on February 5 and is also worth championship points. They're the team with everything to play for, but not much left to play with.

It ought to be no contest. But that's what we thought after 36 all out.

Kane Williamson enters 2021 as top-ranked batsman in the world

Conor McGregor wants title shot in next fight despite losing to Dustin Poirier
We and our partners use cookies on this site to improve our service, perform analytics, personalize advertising, measure advertising performance, and remember website preferences.Ok