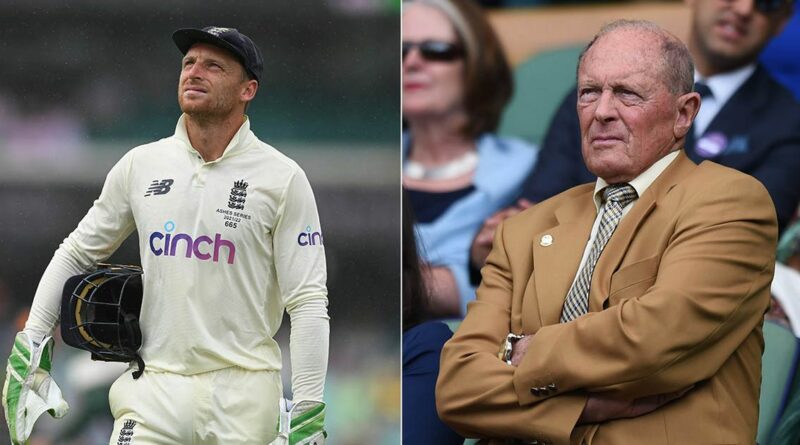 Former England opener Geoffrey Boycott believes Jos Buttler should be dropped after his poor showing in the Ashes.

Buttler has struggled both with the bat and behind the stumps, scoring just 107 runs at an average of 15.28 and dropping several catches.

Boycott has been highly critical of Buttler's performances and, with the 31-year-old ruled out of the final Test due to injury, he feels the wicketkeeper should have played his last Test for England.

In his latest column for the Telegraph, Boycott claimed that Jonny Bairstow, who scored a hundred in the fourth Test in Sydney, should be preferred over Buttler for the West Indies tour in March.

"I'm sorry Jos Buttler has been injured and will have to go home – but his wicketkeeping has been poor and his batting worse," Boycott said.

"When Jonny Bairstow was keeping wicket and lost his batting form, he lost his place in the team to Jos.

"Buttler should now go. He isn’t as good a wicketkeeper as Bairstow and Bairstow is a better batsman against quality bowlers – that’s the important thing.

"Buttler can and does smack bowlers all around in one-day cricket when there are no slips and everyone has an excuse if they get out.

"It’s time to move on from Buttler. England can’t be sentimental or be seduced by his brilliant performances in one-day cricket.

"The fact is he isn’t doing enough to keep his Test place. He only has two centuries in 57 Test matches. In the Ashes, he’s played 14 Test matches and averaged 19. That isn’t good enough."

However, speaking ahead of the fourth Test, Buttler maintained that he wants to continue playing Test cricket.

"It’s certainly my ambition," he said. "I don’t think I’d have put as much into it as I have done if it wasn’t.

"I have fantastic family support – they’re very supportive of me and my career, and make a lot of sacrifices for that.

"That’s one thing that gives you a lot of motivation and drive to try to make it all worth it. It’s certainly maintained my drive and ambition to try and play.

"At the moment I feel I’ve got that support and I’m in a place where I want to try to make it work."