Cricket Australia is taking unprecedented measures to address potential mental health issues among players as the game was given another reminder of the uncertainty created by the COVID-19 pandemic in rolling out the season.

The governing body, in conjunction with the Australian Cricketers' Association, has bolstered mental health resources for a summer in which some of the nation's top players will spend months on the road under stringent protocols. 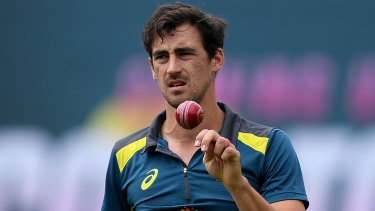 Mitchell Starc is part of a NSW squad that is flying to Adelaide early due to the spike in COVID-19 cases in the state.Credit:AAP

Players and staff will have access to a dedicated psychologist residing in the hub for the Sheffield Shield season – which after months of extensive planning starts in Adelaide this weekend – on top of the medical staff and player development officers for each state team.

There will be daily monitoring of the mental "wellness" of players and staff, while CA's first mental health and wellbeing lead is due to start on Monday week. Players' stress and anxiety levels will be constantly monitored.

"We monitor all these things with players to make sure in a normal course of a season that we're on top of things, not only CA, but also with the states – that's the Australian cricket methodology," CA high-performance boss Drew Ginn said.

Players have been advised to use "common sense" and avoid eating out, going to pubs and clubs, and attending large gatherings to avoid a situation where they can contract the disease and result in possibly multiple members being implicated through contact tracing.

Balls that are hit into the crowd and touched by the public will be disinfected by the umpire.

Mental health became a major public issue for the game last season when Glenn Maxwell, Will Pucovski and Nic Maddinson were among several players to take time away from the game.

The resilience of players will be tested even further this season by the introduction of hubs to ensure the game's $300 million summer is delivered.

Some of Australia's leading players have already spent close to six weeks under stringent protocols, including two weeks of quarantine in Adelaide. Star batsman Marnus Labuschagne has spoken about players feeling "claustrophobic" on non-training days when they were confined to their rooms.

Highlighting the uncertainty confronting players, NSW's squad was due to fly to Adelaide next week but was told on Wednesday night they were to leave on Thursday to make the most of South Australia's open border to NSW.

Test stars Mitchell Starc and Nathan Lyon, who only last week completed their quarantine after returning from the UK, are part of the Blues' 17-man touring party. The change in plans was prompted by a spike in NSW COVID-19 cases.

NSW officials did not want their players to be subjected to the two-week quarantine that Victoria's players are now under. The Blues do not play their first game, against Victoria, until October 22.

Told to expect the unexpected, the Vics have had their accommodation changed from the Adelaide Oval Hotel to the nearby Playford.

Limited to training in cohorts of four, players must train at opposite ends of the day and are required to wear personal protective equipment, including masks and gloves.

The measures on Victoria's squad are said to be more onerous than those for Australia's returning limited-overs squad.

Ginn has expressed concerns about Victoria's preparation for the Shield campaign.

"There are general concerns around the Victorian situation with the quarantine," he said. "They're able to get a bit of training done, but it's restrictive.

"It is a bit more restrictive than what we first knew. For Victoria, the biggest challenge is when you look at their quarantine period in the way they're going to be able to train from a health perspective.

"The bowling loads – if they're not able to train and prepare properly, that will guide some of their decision making around the first round."

‘I was the Hot Spot guy’: Marnus reveals life on other side of camera

Arsenal outcast Mesut Ozil sends message of support to his team-mates
We and our partners use cookies on this site to improve our service, perform analytics, personalize advertising, measure advertising performance, and remember website preferences.Ok