CANDICE Warner has shed a ray of light onto her husband’s grade cricket walk-off on Saturday, which saw the banned international star leave the field after being sledged at the crease.

Warner spent two minutes off the field before returning to hit a glittering 157 for Randwick-Petersham against Western Suburbs.

According to spectators at the ground, some of the left-hander’s teammates had to convince him to return to the wicket and after a short break in play, he resumed his innings.

Weirdness in Sydney Grade cricket. Dave warner, on 35, just walked off the field in the middle of the over. Told the umpire “I’m removing myself from the game”. Apparently it was because of a sledge. He walked off, then came back out to bat 2 mins later. #Cricket pic.twitter.com/jX0lihgLxU

“I won’t go into the details yesterday but David was taken aback by the comments, and thought they went a little bit too far, so he decided to remove himself from the game,” she said on Channel Nine’s Sports Sunday.

“He left the field because first of all he didn’t like what he was hearing and where that could have been taken. It was hurtful, very hurtful.”

Warner is serving a 12 month ban alongside Steve Smith after Australia’s unfortunate ball tampering fiasco in March. The incident was one of the final dominoes to fall in Australian cricket’s push for a complete overhaul.

Panellist Peter FitzSimons grilled Ms Warner over the debacle, asking if her husband was “the last person who can complain about vicious sledging”.

“Everyone has their own opinion but there is a difference between sledging and abuse,” she said.

“I personally would have put (the sledge) into that category.”

FitzSimons continued, asking if the incident would “temper” Warner’s desire to go on the attack upon returning to the baggy green next year.

“David is very passionate and he is an aggressive player, that’s why he is one of the best players in his position, because he is aggressive,” Candice rebutted. “I think that he will have to be careful when he comes back, but he won’t change his style of playing.”

The former Aussie skipper said he was concerned about the “mood around the game” and would rather not have situations escalate to the point where a player removes himself from the game.

“David and I have had disagreements about the way things have been handled in the past, but sooner or later everyone in cricket has to get over it. We have to move on,” he said.

Taylor was probed over the result of Cricket Australia’s internal cultural review and revealed some of the findings will be “confronting” to the Aussie public.

“I have seen the review. It will be hard-hitting and confronting for CA,and for anyone who loves the game of cricket. (There are) 41 recommendations in the review, I think. I won’t go into more detail than that.”

The full review will be released at 1pm Monday (AEDT).

ECB announce the 2020 season will be delayed for seven weeks 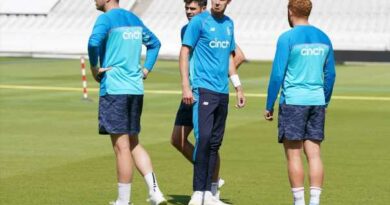