Veteran seamer Stuart Broad revealed England had adopted a plan to suffocate the Australians but the home side slipped the noose in an intriguing start to the second Test in Adelaide.

Jimmy Anderson presented Broad with his 150th Test cap and the reunited pair then got down to business, stifling Australia’s top order and dismissing Marcus Harris for three. The Australians typically score at 3.3 runs per over but they were made to battle along at 2.5 per over on day one of this pink-ball clash.

“We have got the mindset that if we can control the rate, there will be a period where we can put wickets on the scoreboard,” Broad said during play. 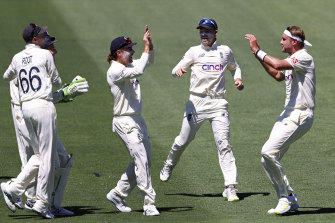 Those wickets, however, didn’t eventuate, and the Australians will head into Friday’s play in control on 2-221 off a sluggish 89 overs. Wicketkeeper Jos Buttler, having completed a spectacular catch to dismiss Harris, later two grassed two chances off Labuschagne, unbeaten on 95.

The Queenslander was given a life on 21 when he awkwardly handled a Ben Stokes bouncer and offered a leg-side catch, and later with a regulation edge off the second new ball when he was five runs shy of his sixth Test ton.

There has been much debate as to why England opted to leave both Anderson and Broad out of last week’s Gabba Test, the two fabled greats having combined for 1156 wickets to that point.

One theory was the tourists wanted to have both men fresh for the pink-ball clash, seen arguably as the tourists’ best bet for victory, and they certainly were that, as they shared the new ball on a sluggish deck.

Broad thought he had Harris lbw on three only for the decision to be overturned before returning next over and having the uncertain opener brilliantly caught one handed off a mistimed pull down leg side by a diving Buttler. The athletic gloveman slid 4.1 metres from his starting position to complete what Shane Warne described as an “absolute screamer” and Adam Gilchrist as “truly remarkable”.

Harris has had trouble with the short ball in Test and domestic cricket, and England’s plans were clear. Broad had just positioned a leg gully only a couple of deliveries earlier, for Harris likes to flick deliveries off his hip. This time a mistimed pull shot was his undoing on three, coming after scores of three and nine out in Brisbane. Now in his third stint in the side, and without a century to his name in 12 Tests, his spot will be a talking point.

Former Australian batsman Mark Waugh said Harris “has a bit to think about going forward in this series”. Fellow Fox Cricket commentator Kerry O’Keeffe questioned whether Harris is of Test quality at this point of his career, and compared his style with that of Marnus Labuschagne.

“It’s a sharp contrast to Marcus Harris who has not yet got a platform to open the batting. He is vulnerable to the short ball, he wants to feel the bat on the ball where Labuschagne has a completely different outlook. He wants to leave everything,” O’Keeffe said.

“I am a fan (of Harris) but he is still not quite there.“

It was curious as to why Broad nor Anderson peppered Warner early with short balls, for Warner was left bruised after he was hit in the ribs by a short ball from Ben Stokes in Brisbane and has been in discomfort since. He wore a chest guard on Thursday and surely was preparing to be tested.

Instead, Broad – only the third Englishman to reach 150 Tests – picked up from where he left off in England in 2019 when he tormented Warner. He began his attack from around the wicket, probing Warner’s pads and off-stump with subtle changes of line and length.

This did help to stifle the typically turbo-charged Warner, who took 20 deliveries to get off the mark – the slowest of the 161 innings in his distinguished Test career. And his first score only came after an Anderson misfield off his own bowling, which allowed a single.

“We have had a lot of battles over a long period of time. I felt my first spell, the ball was nipping, I was trying to bring the stumps into play but I actually felt as a team, the first hour and a half, we could have picked up three wickets,” Broad said.

It would not be until the third session, however, that Warner would fall, slashing Stokes to Broad at cover and falling just five runs shy of his 25th Test ton.

Anderson settled into his typical groove of 130kmh and did beat the bat with his changes of seam position but he was unable to generate any swing, normally his calling card, before tea. He was a touch too short too often but his opening spell of 0-7 off five overs meant the batsmen remained under pressure.

Anderson should have been rewarded six overs before stumps when Labuschagne edged a back-foot drive but Buttler spilt what was a regulation chance.

Where Anderson and Broad’s omissions in Brisbane were talking a point, the decision to rest Mark Wood amid a five-man, frontline seam attack and also not play a spinner, dropping the left-arm spin of Jack Leach, in this Test will also be questioned.

Sports news, results and expert commentary. Sign up for our Sport newsletter 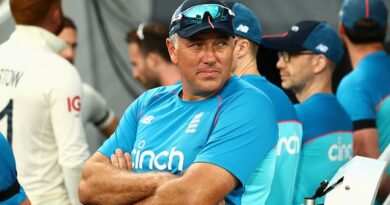 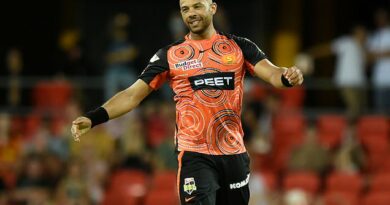 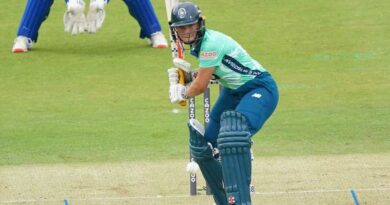