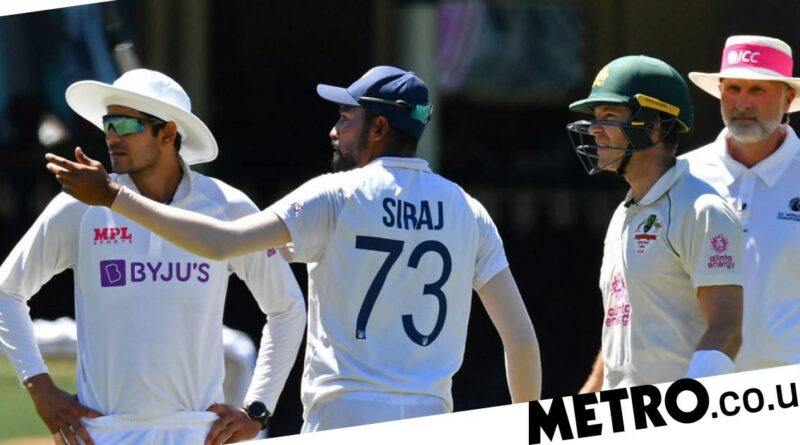 Cricket Australia and head coach Justin Langer have apologised to India after some of their players claimed they were subjected to more racial abuse from spectators during the third Test in Sydney.

On day four, play was halted for ten minutes after Siraj – who lost his father in November – told the umpires of more alleged abuse.

Police subsequently removed six spectators from the Sydney Cricket Ground, although it is not clear what was said to Siraj.

The four-match series is evenly poised at 1-1 but Australia look set to win the third Test, needing eight more wickets on day five with India requiring 309 more runs to for victory.

‘Cricket Australia condemns in the strongest terms possible all discriminatory behaviour. If you engage in racist abuse, you are not welcome in Australian cricket,’ said CA’s Head of Integrity and Security, Sean Carroll.

‘CA is awaiting the outcome of the International Cricket Council’s investigation into the matter reported at the SCG on Saturday.

‘Once those responsible are identified, CA will take the strongest measures possible under our Anti-Harassment Code, including lengthy bans, further sanctions and referral to NSW Police.

‘As series hosts, we unreservedly apologise to our friends in the Indian cricket team and assure them we will prosecute the matter to its fullest extent.’

Australia coach and former batsman Langer, meanwhile, said: ‘I’m sorry, it is upsetting and it is disappointing.

‘It is one of my greatest pet hates in life, that people can think they can come to a sporting event, whether it is cricket or any kind and pay their money and think that they can abuse or so whatever they like.

‘I hated it as a player, I hate it as a coach, we have seen in different parts of the world, it is really sad to see this happen in Australia.

‘It’s a shame to see the series getting marred by incidents like this.’

The famous SCG holds 48,000 but the crowd has been limited to 10,000 fans per day due to social-distancing measures.

England on top of Pakistan after three morning wickets

Ashes 2019: Joe Root stuck trying to be the player he was and the one England need him to be now