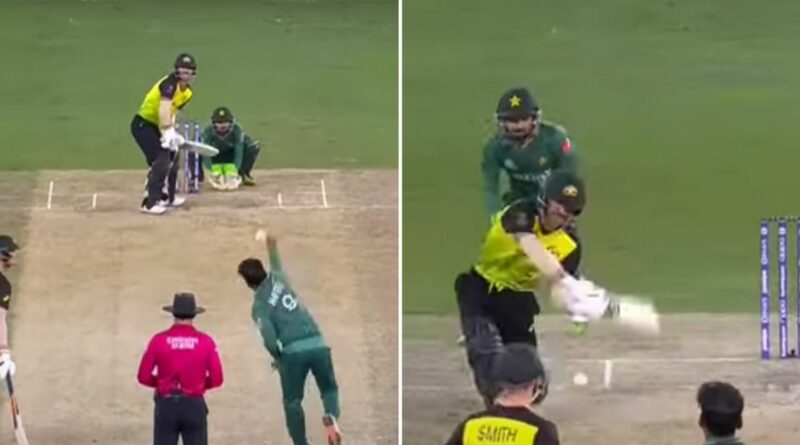 Australian opener David Warner had a moment to remember in his side's epic T20 World Cup win over Pakistan – smashing a double bounce no ball for six.

Warner was leading his side's pursuit of 177 when all-rounder and spinner Mohammad Hafeez bowled a delivery to hearten amateur cricketers everywhere, dragging the ball down badly and seeing it bounce twice before it reached the batsman.

The left-hander wasn't in the mood to show mercy, stepping to the edge of the square and swooping low to hammer the ball into the stands for one of his three maximums.

Warner also hit three fours before eventually falling for 49, and in a thrilling finish, it was Matthew Wade who hit three straight sixes to lead Aaron Finch's men to a five-wicket win with an over to spare.

It means a final between arch rivals Australia and New Zealand on Sunday, but afterwards it was Warner's belligerent hit that dominated much of the talk.

And his actions divided opinion, with former India player Gautam Gambhir seemingly livid about the incident.

"What an absolutely pathetic display of spirit of the game by Warner!," he tweeted.

Grosvenor Sport is offering new customers £30 in free bets when you bet £10 on the T20 World Cup!

Register with Grosvenor Sport, place a £10 bet on any World Cup match and your account will be credited with £30 in free bet tokens!

Ashwin came under fire for 'mankading' Jos Buttler in the 2019 season of the IPL, with Australian legend Shane Warne among the vociferous critics.

Aussie fans were quick to defend their key man though, with @TheLadfromAus posting: "Absolutely no issue with Warner hitting that 6 off the double bounce, it's up to the umpire to decide if the ball is live or not and if it is, it's in play.

"Warner's a dh but nothing to answer here, that was just rubbish cricket from Hafeez."

Indeed, there's nothing in the rules that would have prohibited Warner smacking the ball over the rope, and @gentleprash argued: "Hafeez's delivery dropped on the pitch and Warner was well within his rights to smash the ball….yes if the ball had dropped outside the pitch, Warner's actions could have (been) questioned. Not otherwise."

@FLEXI66640346 added: "Warner did a great job, Pakistani players should have it in their mind that it's not road side cricket to put a double bounce ball its a T20 international."

Can you help underprivileged children experience the joy of cricket? Charity Bat for a Chance donates cricket kit to those most in need and is also fundraising. Find out more here.