David Warner has opened up on his intense experience fleeing the Indian Premier League and quarantining in the Maldives.

Warner and other Australian cricketers including Pat Cummins and Steve Smith were reunited with their families on Monday night after being released from two weeks of hotel quarantine in Sydney.

The star opening batsman has revealed the full extent of the tragic scenes he witnessed in Covid-ravaged India during his time playing for Sunrisers Hyderabad in the IPL.

“I think it really hit home when everyone saw that piece on the TV about what was happening in India with the oxygen,” Warner told Nova’s Fitzy & Wippa.

“You know, people on the streets lining up to cremate their family members and we did see that a couple of times going to and from the grounds.

“Open fields and stuff. You know, it was terrifying. And it was just really upsetting from a humanitarian point of view.”

Warner also opened up on the rush to quarantine cricketers in the Maldives following the IPL’s suspension.

“I think the right decision was made (to suspend the IPL). Got into the bubble, which was obviously going to be a challenge once we started moving, getting on and off aircraft,” he said.

“But look, they did their best to try and put it (the IPL) on there and we know in India that everyone loves cricket, and half the population would do anything to put a smile on their face and just watch that.

“It was challenging. We had to get out of there ASAP.

“We were there (in the Maldives) with other people and they were there for the same reasons — getting out of India, trying to get to their countries as well because pretty much everyone was locked out of their country who had been into India.”

A family member offers prayers during cremation of his loved one (Photo by Sanjay KANOJIA/AFP).Source:AFP

Family members and relatives wear protective gear as they carry a body to the crematorium (Photo by Diptendu DUTTA/AFP).Source:AFP

Warner also shed light on teammate’s Steve Smith’s obsessive habits, after the gun batsman’s wife Dani Willis posted a photo on Instagram this week showing him testing the weight of his bats while blindfolded.

“A little insight to Steve Smith when you’re in a hotel room. If he’s above you, you ain’t sleeping,” Warner said.

“All you hear is the tapping all the time. You think it’s the cleaners coming in at midnight. You’re like, ‘Nah, that’s just Steve testing his bats’.

“He likes to obviously feel the weight but he likes to close his eyes and yeah, that’s how he does it.”

Warner revealed another superstition of Smith involving his thigh pad.

“It’s just so common, Steve, that he put his whites on to actually work out if his thigh pad was going to fit in his pants. I’m worried about my box, not my thigh pad,” Warner said.

“He’s the most relaxed person. There’s no rituals, there’s nothing,” she said.

But Candice added there have been a few occasions where Warner’s relaxed approach has nearly caught him out.

“I’ve had a few calls where, ‘I’ve just arrived to the game, Candice I don’t know where my baggy (green) is’. This kind of stuff,” she said.

“When I was in Bangladesh, mind you,” David chimed in. 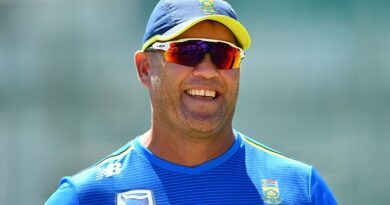