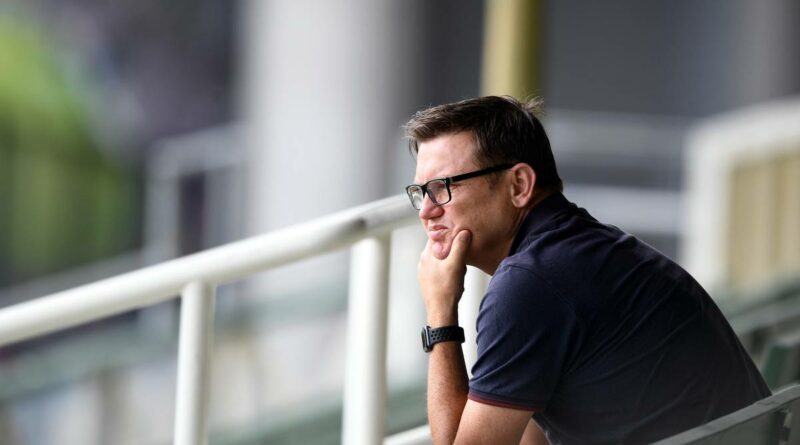 A self-confessed test cricket tragic for as long as he could remember, Dylan Cleaver’s appetite for covering the game waned as “real life” commitments kicked in. Back on the tools for the first time in years, the joy of cricket returned, too.

You always remember the first time.

It was Christchurch, February, 1997. It was set up perfectly. Big first-innings lead, bit of a collapse in the second, but England needed an improbable 305 to win on a wearing Lancaster Park pitch.

The home team had a young captain, an elegant left-hander, and an even younger left-arm spinner with a bounce in his run-up, spectacles and long locks straight out of a Pantene commercial.

Received wisdom suggested that England would succumb to spin on the final day but a teenage Daniel Vettori was no match for the experienced Michael Atherton, and there were many strategic and tactical gambits Stephen Fleming had yet to master.

It was a poor loss for New Zealand but a massive win for a green reporter sitting in a dingy press box with a dodgy laptop connected to a dial-up modem that wouldn’t work. It was the culmination of a long-held dream: to watch cricket and write about it.

The great game had been a massive part of my life since early childhood but this was better than playing. There were some small worries — deadlines, missing angles, pissing players off — but they were nothing in comparison to the deep-seated, where-the-hell-is-my-next-run-coming-from anxieties that haunted the last years of a modest “clubbie” career.

There was a pithy and popular line among the players in those days that went, “Those that can’t, write”, and I was the living embodiment of that — and couldn’t have been happier.

Off and mostly on, that happiness continued for the best part of a decade-and-a-half after that.

There were some memorable matches, some bizarre moments and a lot of crud. Somewhere along the line, my internal scales tipped from boyish enthusiasm to jaded cynicism.

The sign-off was not dramatic or even a conscious decision. With two children, I hated being away from home for long periods and started to resent the inherent selfishness that crippled the sport, often by ex-players who claimed to be acting in the game’s best interests, and sometimes by the players, coaches and administrators themselves.

Where my mind was at with cricket could be pinpointed by my conception and co-authoring in 2012 of a multi-day series on the sport unsubtly titled “The Shame Game”. Cricket was still interesting, but the fan in me was long gone.

Apart from dipping in and out of the 2015 World Cup, my only involvement was columns and the odd statistics-based feature (at heart, committed cricket fans are nerds), and I was all right with that … until an opportunity popped up to cover cricket again this season.

I‘ll remember the last one (for now), too.

It was set up perfectly. A big lead on the first innings. All New Zealand needed was for their bowling attack, led by a six-test novice with a spring in his step and blond, sensible, above-the-collar-length hair, to finish the job.

From the moment Kyle Jamieson nicked out Shan Masood for a duck late on day three, there was never any doubt it would happen.

There hasn’t been much doubt about anything this side has done this test summer. Since Tom Latham took strike against Kemar Roach at Seddon Park, to the moment Matt Henry caught Zafar Gohar on the fine leg fence at Hagley Oval, it has been close to unfettered domination.

The word clinical has been used several times, probably on these pages, but it’s not right. It implies a bloodless pursuit of victory but there was heart and soul in every corner of the 4-0 sweep.

There was the obvious, like Neil Wagner bowling 11 straight second-innings overs at Bay Oval on broken toes, knowing that if he came off, he wasn’t coming back on, and also knowing that on a dying pitch with an old ball, it was his time to go to work.

Like Henry Nicholls batting on one leg in Christchurch, the goal being to secure a large enough first-innings lead so they would bat only once.

There were more subtle moments. Acts that don’t get a lot of column inches but contribute to a common goal, something that has been notoriously difficult to achieve in such an individualistic team sport.

Like Trent Boult, late on day three of the Hagley Oval test, realising the new ball wasn’t swinging and encouraging his captain to take him off so Jamieson could have a rare crack.

Or top order batsmen — a breed who traditionally love not outs for statistical purposes — throwing their wickets away at Mt Maunganui in the pursuit of quick runs.

Every time New Zealand needed something done this summer, there were multiple players lining up to do it. Even the actors with the fewest lines had something important to say.

Mitchell Santner took the final wicket as the end was drawing near at Mt Maunganui (and his phenomenal run out in the first innings should not be forgotten). Will Young gritted out 43 tough runs at the Basin and took a one-handed stunner at Hagley as a sub fielder.

New Zealanders scored six centuries this summer, two of them doubles and another two 150-plus. They lost just 38 wickets across four tests, at least 10 of them on the slog.

They took 78 wickets across four tests, with only Shane Dowrich being absent hurt preventing them from collecting the full 80. There were four five-fors. Nobody took a bag against them. (If you’re looking for a black mark, only three wickets were taken by spin, and one of those was to Kane Williamson.)

They played fast-paced cricket when able and attrition cricket when required. They made all the right moves. They went to No 1 in the world.

The pushback on this official ICC elevation to best team in the world was immediate and came from mostly predictable sources, a large continent to the west and a subcontinent to the northwest.

To paraphrase the gist: “All they’ve done is beat minnows at home. We smashed you 3-0 at home.”

All rankings, given they’re based upon algorithms most can’t pretend to understand, need to be taken with a grain of salt, and New Zealand got just about everything wrong on that miserable tour to Australia last season. But the minnow argument is weird.

New Zealand ARE the minnows.

The idea that the Black Caps are doing only what they’re meant to do by convincingly beating Pakistan, the West Indies, India and England in home series is to distort reality. New Zealand sit comfortably on the loss side of win-loss ledgers against three of those countries and have only recently crept ahead of the once-mighty Windies by virtue of winning eight of the past nine tests.

The latest NZC annual report stated there are 65,000 active cricket players in New Zealand. According to a recent report in Cricinfo, Australia has more than 700,000 players.

Then there are conditions. New Zealand’s wet spring months mean the window for playing cricket in decent conditions on municipal and school grounds is tight.

Finally, there is money, of which New Zealand Cricket has enough to survive, but nowhere near as much to thrive compared with non-minnows.

If you consider those aspects — a heritage with no history of sustained success, a tiny talent pool, a short season and tight high-performance budgets — and still begrudge this team their moment in the sun, no matter how fleeting, it says more about you than those who choose to celebrate it.

But even that defence of the team doesn’t get to the heart of it.

The real reason to celebrate this team is because they go about things the right way.

Any time you invoke the “right way” clause, you are on thin ice.

There are all sorts of different ways to go about the playing of sport, from Corinthian idealism to win at all costs. The pragmatists would say that the only right way is the winning way.

New Zealand have tried a lot of different ways over the course of their history, sometimes organically and sometimes by design. They’ve tried to inject a type of self-centred “English” professionalism to their game, to more recent attempts at a hard-bitten “Australian” edge.

Both approaches had moments of success but neither were sustainable or particularly edifying.

All that went out the window in 2013 when New Zealand hit a despairingly low ebb, and since then, the culture of the team evolved to the point where there is no artifice.

You hear the odd snide comment that the Black Caps are more interested in winning friends by playing Mr Nice Guy than winning games, but this rise to No 1 shows the two do not have to be mutually exclusive.

They have discovered that the only way for them to remain competitive is to be true to themselves: to enjoy their cricket and enjoy the company of those they play cricket with.

That clear sense of enjoyment is reflected in the people that have poured through the gates at Wellington, Mt Maunganui, Christchurch and (to a slightly lesser extent) Hamilton this season to watch them perform in a format we are told is an anachronism with no future.

It’s also reflected in the media that follow them. (There’s a collegiality among that fraternity that never existed before with ex-internationals in the broadcast booths generously passing on observations and ideas to the lesser lights in publishing that happened only rarely before.)

Although there remains the odd frustration at the coyness of some players in press conferences, they almost always give considered answers — unless you ask them to talk up themselves.

Which brings me slowly and circuitously back to the beginning.

It has been a long time since I’ve felt this engaged in cricket. When the final test of the summer ended, it felt too soon. The season of Kane and Kyle has been a revelation: the only disappointment is it’s not an endless summer.

‘When he showed up, it was like Christmas’: Hodge pays tribute to Deano

BUMBLE AT THE TEST: Sam Curran is not a cricketer to be underestimated