England 's new Managing Director of Men's cricket Rob Key has left the door open for Joe Clarke to earn international honours, stating he can "see no reason why not" to pick the 25-year-old.

In 2019, Clarke was informed by the ECB that he would not be considered for England selection after evidence emerged during the rape trial of his former Worcestershire teammate Alex Hepburn.

During the trial, Clarke was named as a member of a WhatsApp group which featured disrespectful messages that "demeaned women and trivialised rape" and was described by the judge as featuring a "pathetic sexist game to collect as many sexual encounters as possible".

Following the revelations, Clarke was dropped from an England Lions squad, fined and given a four-match suspension for bringing the game into disrepute. Hepburn, who was Clarke's roommate at the time of the offence, was convicted of rape and sentenced to five years in prison.

Clarke has not been picked by England since the trial, but Key has left the door open for him, saying: "I'll have to look into exactly where that's been now and what's gone on in the past. But, for me, I see no reason why not.

"I think you can't penalise people forever in life. I know we want to do that at times and the whole world will never forgive anyone for anything at the moment. But I think sometimes you can do your time and you can come back."

Key also namechecked Clarke when discussing players who are competing for a spot in England's middle-order. "I don't think [the Test team] will be that different," he said.

"In 2015, they just basically changed the entire white-ball squad and played a different brand of cricket. I think we [already] have the players who can do it [better in Test cricket].

"You could probably there aren’t loads of people putting their hands up as openers. But there are lots in the middle order. People like Ollie Pope, Joe Clarke and Ben Duckett are playing well. It's almost a log jam.

"I am looking at people thinking 'he's a good player, but how do you get him in?'. There is plenty of talent. It's just about when they come in how they can keep producing."

Clarke was named as one of England's reserve players for the recent Test series against the West Indies and told the Cricketer earlier this month: "I don't know how long [the case] was held against me.

"I'm trying not to think too much about that and just try and perform out there for Notts and in the competitions that I have the opportunities in.

"I guess I went from someone who was consistently in touch with people from the ECB to not having any communication for a long time. It was a nice phone call, just to know that my name is back in the frame."

When asked specifically about the WhatsApp group, Clarke added: "I don't go out there to say stuff on that. I feel like I just want to concentrate on the now and what can happen in the future.

"I feel like that was a long time ago and I don't want to keep going back to that. I feel like I've moved on from that. So that's why I don't tend to read or listen to those sort of comments." 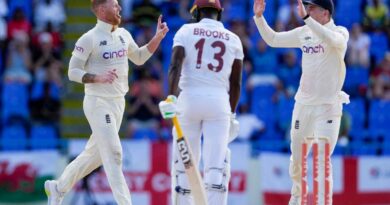