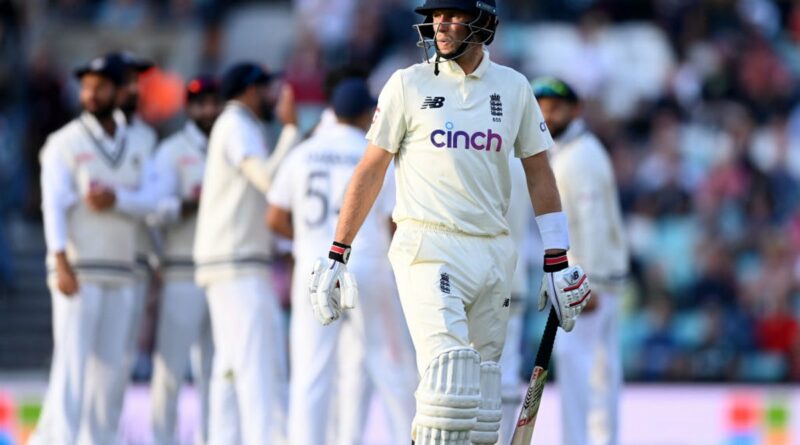 The good news is that England were able to bowl out India for 191 on day one of the fourth Test. The bad news is that Joe Root is already out for just 21. Dramatic as it may be, that seems to be the long and short of it.

It’s not to say the captain’s run of centuries in each match of this series needed to have happened in the first innings. But after India opened a Test batting first and ended the day bowling for the second match in a row, another compounding of their misery by the pound-for-pound best in the game right now would have gone a long way to rubber-stamping England’s advantage.

But after Jasprit Bumrah removed openers Rory Burns and Haseeb Hameed, and Umesh Yadav breached Root’s defence with a delivery that moved a yard in off the surface, 53 for three has changed the complexion of this match and mood of those leaving the Oval on Thursday evening. And in turn, the value of Virat Kohli’s 50 – his 26th in the format – and Shardul Thakur’s explosive 57, which now slots in at number two of India’s fastest half-centuries after bringing up fifty in 31 deliveries, has gone through the roof.

It seems so very Chris Woakes that such an exemplary return to the fray with four for 55 would be so overshadowed by the match situation. Like the clubhouse leader who finished earlier than everyone else, he went from having his feet up in the changing room to leaning forward with a great deal more concern about what was taking place out on the course. Drafted into the XI to replace Sam Curran, he is down to come in at nine, which is not to say he won’t be due soon.

He was awarded England men’s Test player of the year in 2020 when no one was watching, and it has taken this long to make his first appearance in the format since. That last behind-closed-doors Test against Pakistan over a year ago was his last competitive red-ball match.

The gap between cap number 38 and 39 was in part due to a heel injury he picked up when he slipped down the stairs when in forced isolation during the Sri Lanka one-day series. But there was misfortune at the start of 2021. A shared cab from Birmingham to London with Moeen Ali came back to bite him upon arrival in Sri Lanka. Moeen’s positive test meant Woakes had to isolate as a close contact, which ended up having the knock-on effect of no appearance in either the two-Test series against Sri Lanka or the four in India.

The 32-year-old has never been one to exaggerate, so it was left to Root to declare the allrounder’s last eight months had been a “nightmare”. And, in a way, it felt right that even on his return to the XI where he excelled as the best on show, there were smidges of regret. It was like he had never left.

He should have had a fifth five-wicket haul, and certainly should have the India captain in his back pocket. A neat set-up tricked Kohli into playing wide and edging to Joe Root, who followed the ball to his right until he could follow it no more. The sting on the tips of his fingers was matched by that of Woakes’ professional pride.

He would earn a dismissal in his next over, though the Ravi Jadeja instead of Kohli felt a bit like an Ocado substitution of Bollinger for Appletiser. Nevertheless, Woakes sipped away satisfied as Root, who took the catch, held on and remained low, remorseful of not bagging the earlier one.

Kohli cracked on to a second half-century of the series in as many knocks, continuing the breezy excellence that featured up to that life on 22. The eight fours up to 50 included a variety of on drives, some with wrists broken, all executed in a manner that suggested he was about to make up for lost time.

But 50 was his lot as he was picked up by Ollie Robinson for a third time this series. The quality of the delivery, which straightened a touch through to Jonny Bairstow via a slight edge, deserved plaudits. However the headline of the bit was a 20th innings without a century.

Woakes also had Rishabh Pant dropped by Craig Overton at third slip after tea, only to pick up the left-hander a ball later as he continued to listen to the devil on his shoulder and charge to swipe to newly appointed vice-captain Moeen Ali at mid on.

Then he had to contend with Thakur, whose meaty heaves brought seven fours and three sixes, the majority of which seem to come off Woakes, whose last five overs were spoiled for 36 runs. Thakur’s intentions were to slog, but the connections pure, especially the six that flat pull shot off Overton that took him to second fifty in his fourth cap. It was only on review that he was adjudged LBW when Woakes got one straight and past his wristy swings.

What looked “too little, too late” was given a healthy few glosses by stumps. There is plenty of English batting to come – theoretically at least – but arrears of 138 for the loss of Root makes this all about even when it should be anything but. 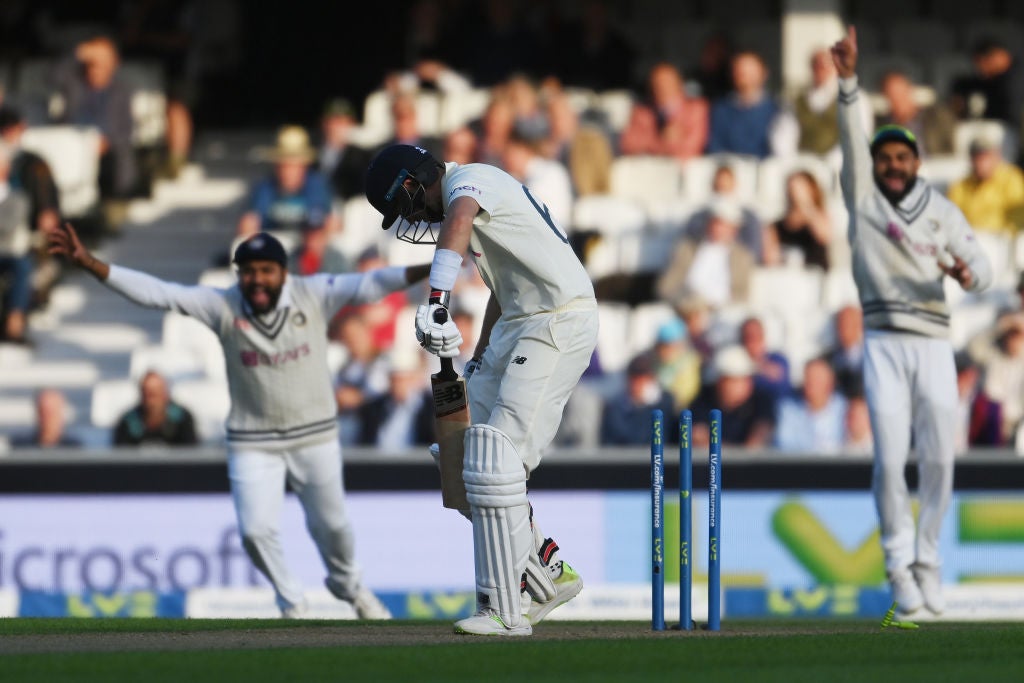 In a way, it negates a toss that was important for the loser given the quandary of prime bowling conditions overhead on Thursday morning and traditionally the best batting surface in the country underfoot. When Kohli called incorrectly, Root was governed by up above.

For the best part of that first hour, there was some doubt as batting seemed that little bit more comfortable, certainly more so than last week’s effort of 78 all out within the first 41 overs of the match.

Visiting openers Rohit Sharma and KL Rahul looked every inch India’s top-scorers of the tour as they breezed their way to 28 for no loss with 6.5 overs on the board. Not much, no doubt, but the comfort of their work was reflected in James Anderson’s first four overs going for 20. Then came the kind of flip.

The next 42 balls came and went, taking them both openers with them for no addition to the score. Extra lift did for Sharma, then Robinson benefitted from Umpire’s Call from a generous LBW call against KL Rahul. When Cheteshwar Pujara tucked off his hip for four through square leg at the start of the 15th over, a sequence of seven consecutive maidens was ended.

But the pressure remained: Anderson smoothing out his rough figures with a change to the Pavilion End and some movement in and seam away from Pujara that implored the right-hander to play. As lunch was taken with India 54 for three, the fear might have been the break might loosen England’s grip on proceedings.

Not to worry. Though the scoreboard moved a little bit quicker, as it does when Kohli’s licking his lips after cover drives – as he did with one that took him from 41 to 45 – he along with two others were turfed out by tea. 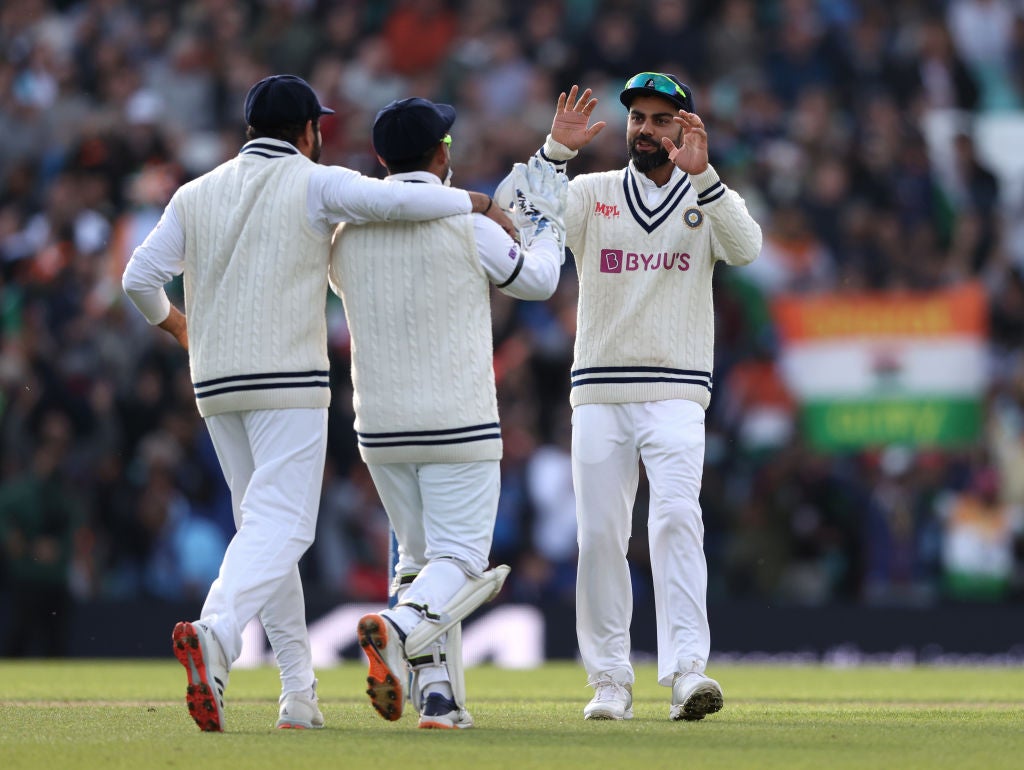 The last bit of orthodox resistance came from Ajinkya Rahane. Something about his 14 felt like a good knock. Perhaps because of his general calm. Perhaps because Rishabh Pant was at the other end listening to the devil on his shoulder, charging the quicks like a man who read somewhere that the best way to fend off a shark attack was to punch it in the nose.

Rahane would become Craig Overton’s first, before Pant swung for the nose once more – three balls after he a life, no less – and found Moeen Ali at long on.

Then came Thakur and up went the rate and India’s chances of making it beyond 200. And even when he went to make it 190 for eight, it was not unreasonable to think Umesh Yadav, Bumrah and Mohammed Siraj could find another 10 runs between them.

Yet within three balls India were done: Overton with the first drop of the innings, but Burns making sure it did not cost the team with a sharp throw at the striker’s end to run out Bumrah for a diamond duck (without facing a delivery). Bairstow then stuck out a sharp right paw to give Robinson a deserved three for 38.

Burns was unlucky to play on to Bumrah, but Hameed knows better than to hop into a cut shot outside off stump when night is closing in. There was not much fault to find with Root when Yadav decided to bowl what was essentially a 86mph off-spinner. The blow of losing someone with a three-figure average nine balls before the close is one that will be felt into the morning.

Overton (one not out) will resume on Friday as the nightwatchman, alongside Dawid Malan who has 26. England should still establish a lead from this position. But after 13 wickets fell inside 78.3 overs so far, this already feels like anyone’s match. 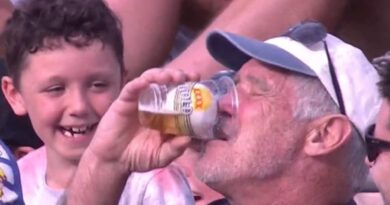