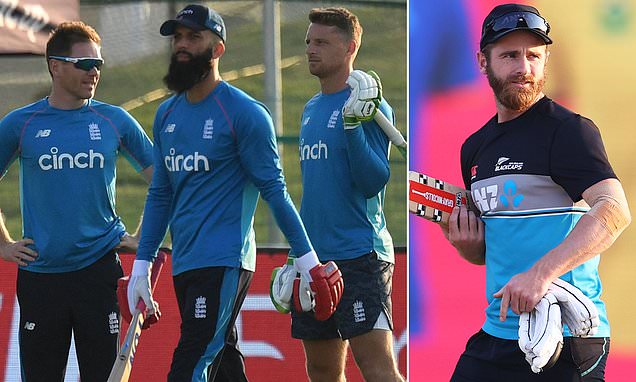 England vs New Zealand LIVE: Eoin Morgan’s side will bat first in Abu Dhabi as Sam Billings comes in for the injured Jason Roy with Jonny Bairstow set to open

England take on New Zealand for a place in the T20 World Cup final on Wednesday afternoon.

Eoin Morgan’s side cruised through the group stage with four wins from five seeing them top their group.

Now they take on the opponents they overcame so thrillingly to win the 50-over World Cup in 2019 in an eagerly-anticipated semi-final in Abu Dhabi.

The winners will face either Australia or Pakistan in Sunday’s showpiece.

Join Sportsmail’s ADAM SHERGOLD for all the action as it unfolds.

A reminder that England will be batting first and we’re about to see England’s openers Jos Buttler and Jonny Bairstow come up against Tim Southee and Trent Boult.

England certainly would have bowled first as New Zealand chose to do but can they get a big total on the board?

The players take the knee before the start as has become customary throughout the tournament.

Time for the action to get underway then as the two teams emerge into a far from full Sheikh Zayed Stadium in Abu Dhabi.

The orange glow of the sunset just fading away to the west as the players line up for the two national anthems.

First up it’s God Defend New Zealand and then God Save the Queen. 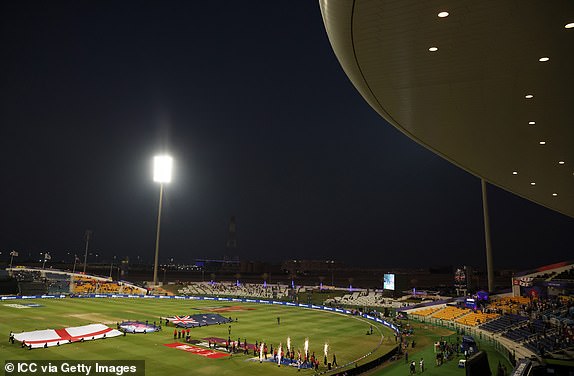 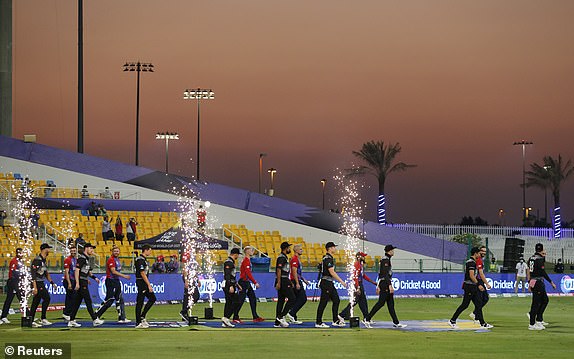 For England to be within two games of holding both white-ball World Cup titles six years after hitting rock bottom in Adelaide with a 50-over defeat by Bangladesh is an extraordinary achievement.

And to have reached Wednesday’s Twenty20 semi-final against New Zealand here after losing so many players to injury — Ben Stokes, Jofra Archer and Sam Curran before the tournament, Tymal Mills and Jason Roy during it — is phenomenal, too.

This, of course, is a rematch of that great day at Lord’s in 2019 with the same two wonderful captains in charge. We all recognise how good Eoin Morgan is but I think Kane Williamson is almost as good, if not as good. It is a battle of two of the greats.

READ THE FULL COLUMN BY CLICKING THE LINK BELOW

New Zealand’s left-arm quick is the tournament’s leading wicket-taker among seamers, with 11 at just 10 apiece and a superb economy-rate of 5.84. He is Kane Williamson’s go-to man under pressure – Boult bowled the super over in the 2019 World Cup final against England – and has learned plenty from six seasons at the IPL. Watch out for early swing.

An ideal foil to Boult, with his right-arm seam and swing, and clever use of the crease. No New Zealander has more than his 106 T20 wickets, and his World Cup economy-rate of 5.70 is the best of any seamer to have bowled at least 20 overs. Consistency personified: in five Super 12 matches, he conceded 25, 26, 24, 15 and 24.

A late replacement for the injured Lockie Ferguson, Milne – a T20 Blast regular with Kent – provides pace and accuracy, although he has been limited to two wickets in four games. But his four overs for 17 helped stifle Afghanistan in Sunday’s must-win game at Abu Dhabi.

His leg-breaks, delivered from a great height, have been one of New Zealand’s main weapons in the UAE, and his wickets of Rohit Sharma and Virat Kohli set them up for the crucial early win over India. Has played with Moeen Ali at Worcestershire, so at least England have an inside track.

Backs up Sodhi with his accurate left-arm spin: four overs for 15 helped slow India to a crawl in Dubai. Took 11 wickets in five T20s when England toured New Zealand in 2019-20, and has only been collared once all tournament, when two overs against Afghanistan cost 27.

Very much New Zealand’s sixth bowler, though he got through his full quota of four overs against Afghanistan, and conceded just 18 off three against Pakistan in Sharjah. His medium-pace is accurate – but hittable because of it. 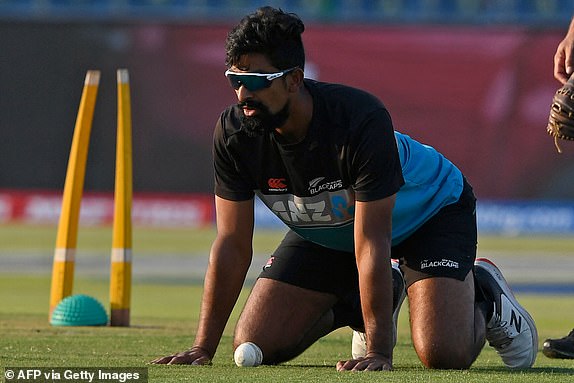 Our cricket correspondent and Wisden Editor Lawrence Booth is out in Abu Dhabi for us and will be offering his insight as the match unfolds.

He writes: ‘First blood to New Zealand, frankly. Whichever captain won the toss was always going to bowl first because of the threat of dew later on, which means Jonny Bairstow will be straight in the game as the injured Jason Roy’s replacement at the top of the order.

‘Sam Billings, as expected, comes into the middle order, but otherwise England are unchanged from the side that lost to South Africa.

‘New Zealand line up as they did in their final group game against Afghanistan. Not much of a crowd yet, though there is a slight middle-of-nowhere feel to the Sheikh Zayed Stadium.’

New Zealand have won the toss and opted to field.

Captain Kane Williamson puts England in to bat first and confirms they will have the same team as their last match.

England captain Eoin Morgan admits he would have done the same as his counterpart and bowled first. One change as Sam Billings comes in for the injured Jason Roy.

As expected, Jonny Bairstow moves up the order to open alongside Jos Buttler. 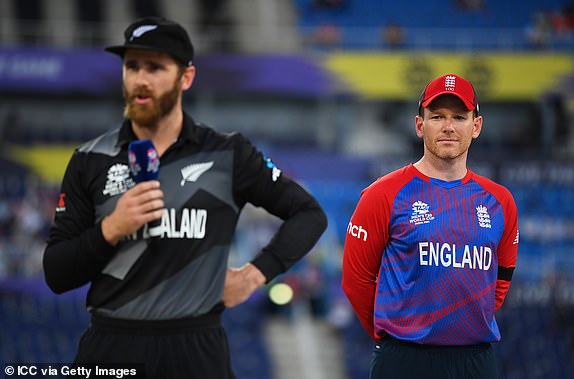 We will find out shortly who is doing what as the captains assemble in the middle for the toss.

I’ll be honest with you, I’m a bit superstitious, so I’m glad England got that defeat by South Africa out of the way in the group stage.

From memory, I’ve never seen a team go through an entire Twenty20 tournament without losing a game, so it bothered me a bit until then.

It’s helped me sleep a bit easier at night ahead of Wednesday’s semi-final against New Zealand. The law of averages tells you that even the very best teams are due at least one loss in a competition like this, as they are beaten once every four or five games.

How often have you seen teams go through a group stage unbeaten and then lose a game they shouldn’t have?

READ THE FULL COLUMN BY CLICKING THE LINK BELOW 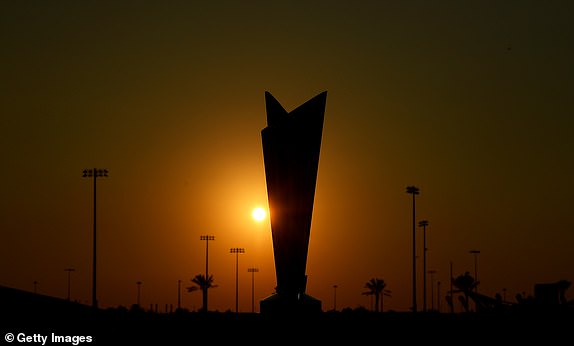 England made largely serene progress through their Super 12 group, recording some statement results along the way.

They skittled West Indies for just 55 in their opening game and crushed Australia by eight wickets, while also gaining the more expected wins over Bangladesh and Sri Lanka.

It meant qualification for the last four as group winners was secured despite South Africa’s 10-run win over them in the fifth and final match.

New Zealand started off with a five-wicket defeat to Pakistan in Group Two but were flawless thereafter. A crunching eight wicket win over India in their second game, having restricted their opponents to 110 for seven, was the stand-out.

Scotland, Namibia and Afghanistan were also overcome to secure second spot behind Pakistan.

Now, he hopes, that experience can help fire England to success at the T20 World Cup.

The 28-year-old has spent more than 300 nights of the past year in bubbles and hotel rooms while playing for England, Lancashire, Birmingham Phoenix, Rajasthan Royals, Peshawar Zalmi and Perth Scorchers. Livingstone insists he is living his dream but there are times he has found it difficult. 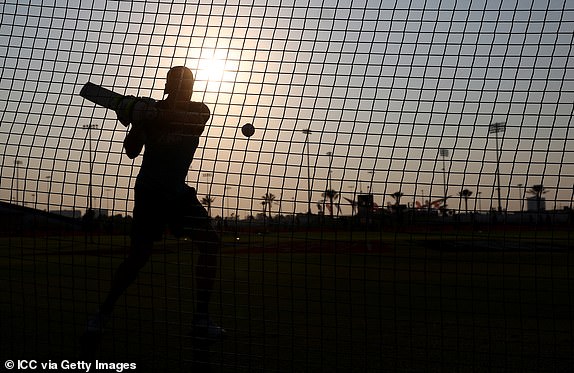 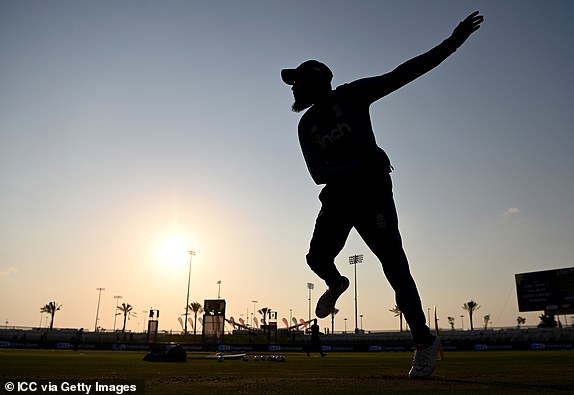 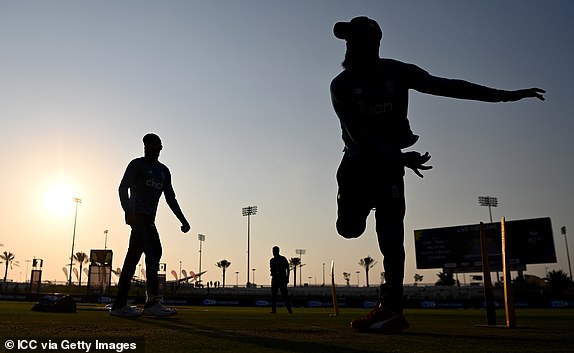 By Lawrence Booth in Abu Dhabi

England will never tire of reaching the business end of World Cups, but their presence in Wednesday’s T20 semi-final against New Zealand in Abu Dhabi has taken no one by surprise.

Back in March 2016, when these two sides met at the same stage of the tournament on a sultry night in Delhi, England won at a canter, before being famously upended by Carlos Brathwaite at Kolkata’s Eden Gardens.

But if there was a sense of chaotic fun about their progress then, their passage to the last four now has felt like nothing more than an inevitable part of the white-ball revolution set in motion six years ago by Eoin Morgan.

CLICK THE LINK BELOW TO READ THE FULL PREVIEW 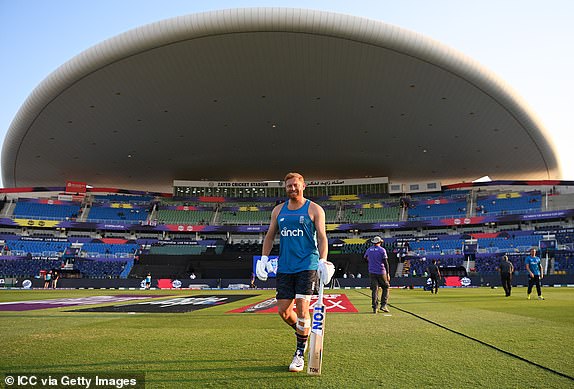 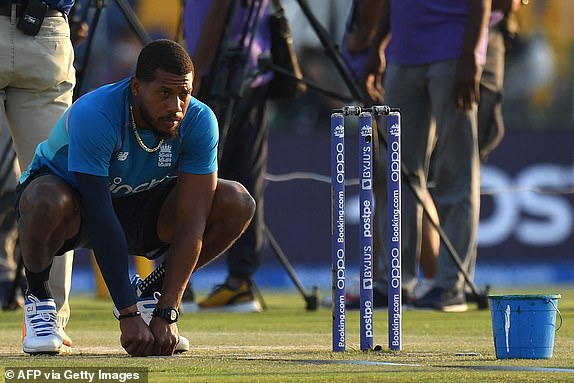 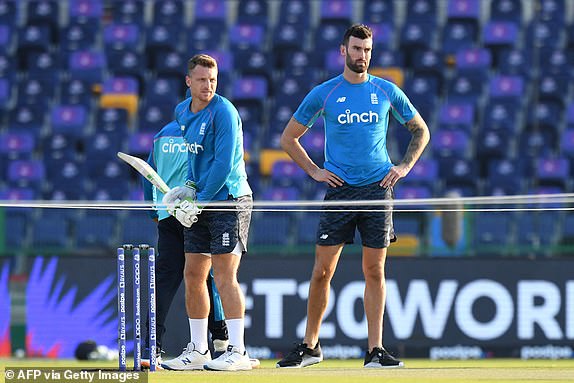 As England attempt to unite cricket’s two white ball world titles, maybe it’s fate that they are required to overcome New Zealand, the opponent they overcame so thrillingly at Lord’s in the 50-over final in 2019.

These two familiar white ball foes meet a stage earlier this time with a place in Sunday’s T20 World Cup final, where either Pakistan or Australia await, the prize for the victor.

England stormed through their Super 12 group, winning their first four matches, but then suffered a loss to South Africa in their final game.

Eoin Morgan and his team will hope the inevitable tournament off-day is now out of the way and they can push on to glory.

England have been hampered by injuries – already without Ben Stokes and Jofra Archer, they go into battle today without opener Jason Roy and bowler Tymal Mills.

But such is their remarkable strength in depth, they can tinker with the order and shuffle the pack and not look any weaker for it.

They remain the favourites to overcome New Zealand today but know it’s far from a foregone conclusion.

Welcome along to our live coverage of this T20 World Cup semi-final from Abu Dhabi. 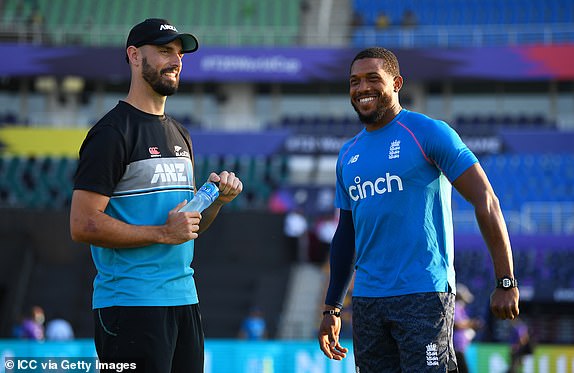 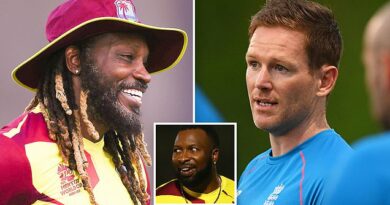 England could scarcely have a more testing opener against West Indies