Home » Сricket » Everyone wins a prize in the whirlwind Ashes

Wait a minute: what just happened?

On day one, Steve Smith and David Warner were both resoundingly booed to the crease. On day 46, neither was, not really. Even the English crowd understood that it would have been ignoble to boo Smith after his immortal series, and almost cruel to boo Warner after his tortured rounds, the antithesis of Smith’s. England’s series-tieing victory this day meant they were in a generous frame of mind anyway. 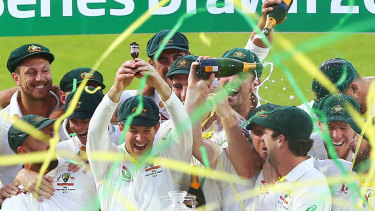 Broad did not merely conquer Warner, he paralysed him. Archer's bouncer disabled the hitherto unassailable Smith in the second Test, sidelining him for three innings and turning the series. In the fourth Test, Smith reappeared to turn it back, in the nick of time. Archer never did get him out.

Not until the final day of the series did England, at last, find a chink. A wan Smith by then was as empty as the Oval’s famous gasometers. “I didn’t have much left to give today,” he sighed. “I was pretty cooked, mentally and physically.”

Those six players burnished their reputations. Two others, Australia’s Marnus Labuschagne, and England’s Rory Burns established theirs. With apologies to Matthew Wade and Joe Denly, that leaves 23 also-rans, for whom things didn’t quite work out. Far from detracting from the narrative, it gave the series its fascination and frisson.

The often-made comparison between this series and 2005 was fanciful. In that series, a team of Australian superstars was upstaged by a team of rising English superstars. Those Ashes were animated by the renown, these by the unknown. Simply, it was never entirely certain what would happen next. One good turn kept deserving another. Root said he thought the cricket throughout was “pretty gripping”. It was.

Mishaps and mistakes played their part. The laming of Jimmy Anderson was one, Tim Paine’s decision to bowl first at the Oval was another. DRS was the X-factor, for Australia an accident forever waiting to happen. Happenstance plays its part in all cricket series, but especially in the Ashes.

Ultimately, neither side played well enough for long enough to win outright, and so the Ashes were played to a standstill for the first time since 1972. Promoters thought the draw was enough of a result in its own right to have a sign saying so ready at the presentation ceremony and a cup.

When the teams reflect, they might agree. Both entered the series with much on their minds. Australia were still trying to get their act together after the travail of South Africa, England to keep their act together after the triumph of the World Cup. Both would have taken what they got out of the summer.  The best and worst of it for Australia was the same thing: they retained the Ashes in England despite only two batsmen averaging more than 30.

Umpires had a tough time of it, DRS too. What is often forgotten is that we – media and fans – make our judgements after reviews, players, and umpires beforehand. Australia might be best advised to make it a working rule to use DRS only for howlers. That was its only intended purpose anyway. 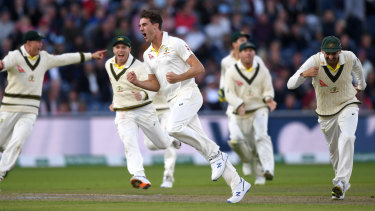 Gratifyingly, the conduct of the series was nearly flawless. Though the contest was fierce throughout, until the second last day the umpires had no need to intervene. There were moments, but they were at the level of kid gloves. The series lost nothing for the civility. It can be done. It was done.

So on Sunday evening as the two squads milled on the Oval outfield, both were sheepish but happy. Delayed only by Wade’s pugnacious century, England had the day’s spoils, but Australia retained the boasting rights. For them, there was champagne, two cheers and a shower of green and gold streamers, but only one, and then everyone went home.

Excitement and anticipation as Castelvecchio starts his autumn path
We and our partners use cookies on this site to improve our service, perform analytics, personalize advertising, measure advertising performance, and remember website preferences.Ok