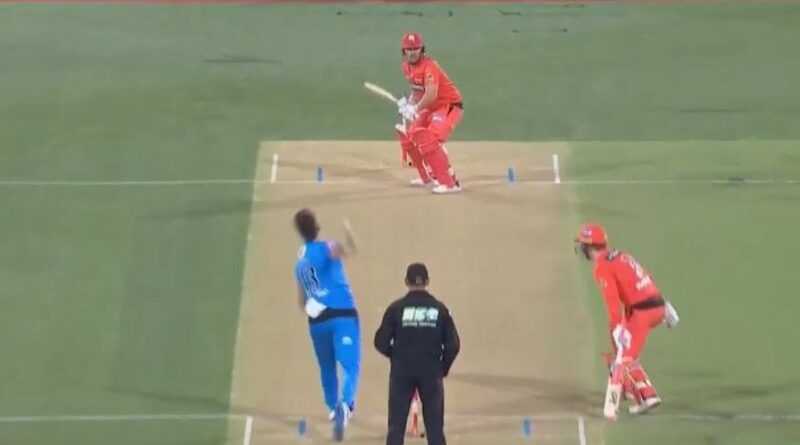 If you wanted to wrap up the Melbourne Renegades Big Bash in a single ball, the first delivery of their run chase against Adelaide Strikers on Tuesday night tells the tale.

Renegades skipper Aaron Finch faced Strikers quick Harry Conway and his eyes lit up to see the ball shape down leg side but instead of dispatching it for four, Finch tickled the ball behind where a diving Alex Carey took an athletic catch to dismiss him.

This is the sort of Big Bash the red side of Melbourne is enduring at 1-7 and the strain is beginning to show with six games still to play.

While Tuesday night's 60-run loss wasn't what they wanted, the Renegades gave themselves every chance to keep the Strikers to a much smaller total with the ball early on and batsman Sam Harper and Mackenzie Harvey combined for 67 runs after Finch's dismissal.

Just two days after being bowled out for 89, the Renegades had the Strikers 4-72 and struggling to handle their tight bowling, then came a no-ball from spinner Noor Ahmad which was hit for six by Ryan Gibson (43 not out).

Much was made of the no ball but no one from the Renegades had a response and from there the bowling strayed and the Strikers plundered them in their final overs to finish on 5-171.

Strikers star Jake Weatherald made 51 off 25 balls teaming with Gibson to make 96 runs for the fifth wicket, the pair were patient early then used their surge overs and Weatherald's power-hitting to extend the total.

Weatherald was especially savage on seamer Josh Lalor in the 19th over who went for 23 runs, aided not only by the thriving partnership but a wide and no ball.

Finch's hapless exit could have sparked another collapse for Melbourne, instead Harper (31 runs off 30 balls) and Harvey settled the innings, Harper will be kicking himself for attempting to sweep spinner Daniel Briggs in the 10th over only to be clean bowled.

Pressure built on the Renegades and Harvey skied a ball from Wes Agar which Carey managed to chase down and catch making it 3-74 with nine overs to play en route to being bowled out for 111.

The strength of the Renegades tight bowling in the opening six overs shouldn’t be disregarded as veteran left-arm spinner Imad Wasim was tight and to plan in the first over and it drifted through to his teammates.

Strangely Wasim was only used for three overs finishing with 2-13 while Jack Prestwidge, who was their only decent performer during Sunday's thrashing in Perth only bowled two overs to go for 0-12.

Mackenzie Harvey has already built a reputation as one of the world's elite fielders with Finch describing him as the best in the world, now the 20-year-old has shown his batting has plenty of promise.

With Shaun Marsh out injured, Harvey moved up to open the batting and his 34 off 29 is an innings to build on and with six games to to go, let’s hope the brains trust keeps giving him such opportunities.

Future success can be built from the ruins of this campaign.

‘I’ll give it a good crack’: Wade embraces new role as fill-in opener

Ashes LIVE stream: How to watch England vs Australia in first Test online