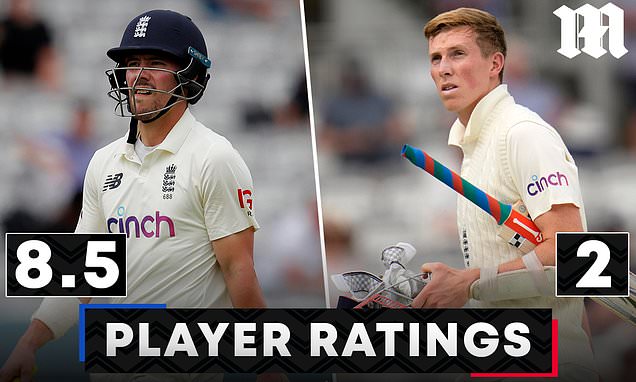 FIRST TEST PLAYER RATINGS: Rory Burns impresses at the top of the order for England while Zak Crawley is up for the chop if his poor form continues

Joe Root had hopes of enjoying a 100 per cent win rate from England’s seven Tests this summer, but had to settle for a draw against New Zealand at Lord’s.

The Kiwis impressed in London with debutant Devin Conway showing no nerves on the big stage while Ollie Robinson’s historic tweets took away from his strong debut on the pitch.

Here, LAWRENCE BOOTH rates and slates all 22 players, with the Kiwis scoring well across the board in what was the opening Test of the summer at the home of cricket. 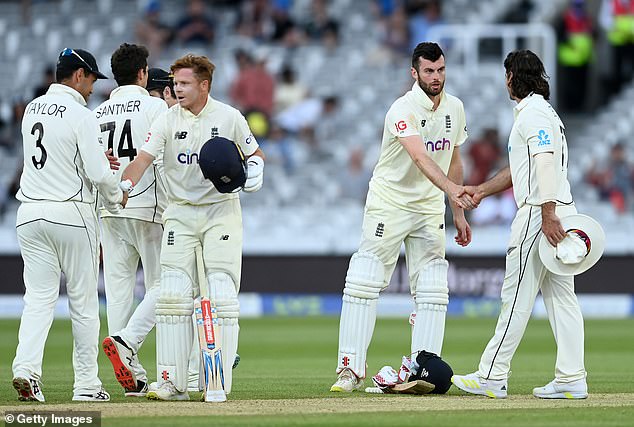 8.5 Rory Burns His battling century saved England in the first innings, when Burns restated his credentials as a long-term opener. And he ensured against an early wobble on the final day.

8 Ollie Robinson His Test debut will always be associated with the discovery of those tasteless tweets, but seven economical wickets and a vital 42 from No 8 justified his selection ahead of Craig Overton.

7 Joe Root Handled his bowlers well on the second morning, and batted nicely for a couple of forties. But the sooner he is rejoined by Ben Stokes and Jos Buttler, the sooner England will feel as if their middle order isn’t a one-man band. 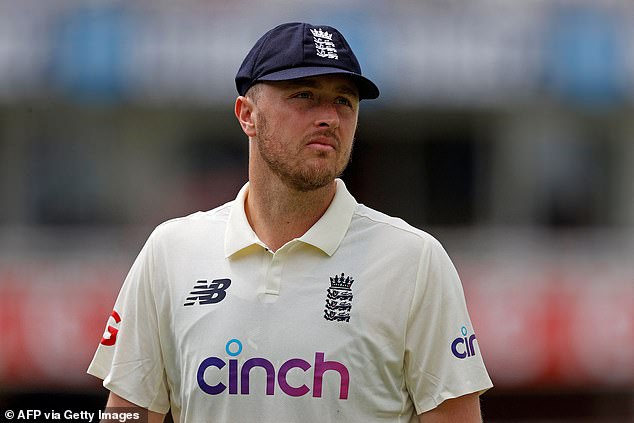 7 Dom Sibley Played round his front pad to fall for a first-innings duck, then settled in for the long haul on the final day, as if determined to make up for it. His tempo remains a worry.

7 Mark Wood Bowled beautifully to keep New Zealand’s first innings below 400, when he was skilful as well as physically threatening. Remains on course to play an important role in Australia.

6 James Anderson Not quite at his best, but won an early battle with Williamson, and bowled without luck on the fourth evening.

6 Stuart Broad Match figures of one for 113 didn’t tell the whole story, especially in the second innings, when he was excellent round the wicket against New Zealand’s left-handed openers. Relieved to take his first Test wicket since January. 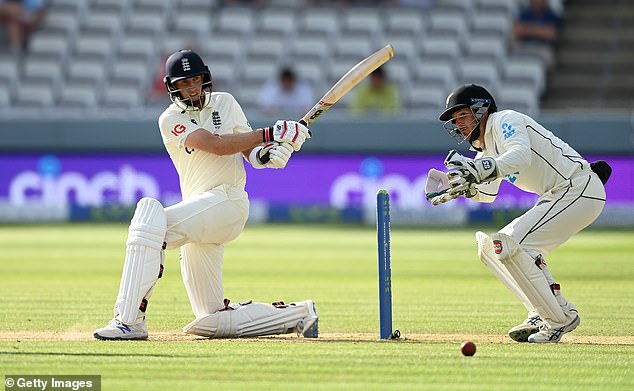 Joe Root batted nicely but with no Ben Stokes or Jos Butler, England’s middle order was a one man band

5 James Bracey A tough debut, not helped by being asked to keep wicket for only the 17th time in first-class cricket, and bat a few places lower than he does for Gloucestershire. Missed a decent ball from Southee, and had a scrappy time with the gloves. The only way, you’d hope, is up.

5 Ollie Pope His decision to bat on off stump will remain a talking point so long as he falls the way he did on the fourth morning – pinned leg-before all too easily by Southee.

3 Dan Lawrence After showing off his talent with 50 and 46 amid the carnage of England’s fourth Test at Ahmedabad in March, Lawrence returned to earth with a horribly loose drive second ball.

2 Zak Crawley Twice outfoxed by Southee, who lured him into a pair of indiscreet drives. Needs runs in the second Test at Edgbaston, or he is looking like a candidate for the chop when the likes of Stokes and Buttler return. 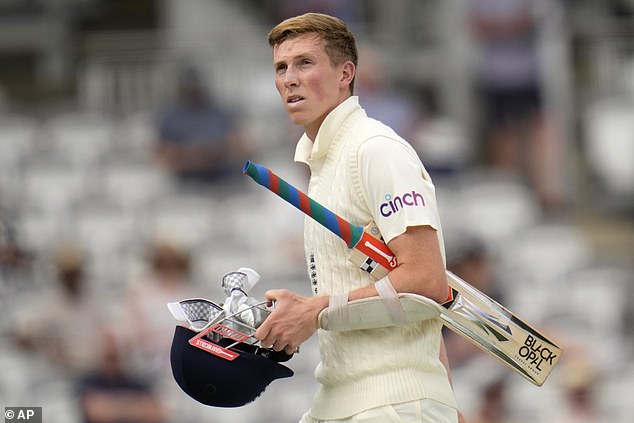 9.5 Devon Conway No opener in history has scored more runs on his Test debut than Conway’s 223. His first-innings double-century was a masterpiece of organisation.

8.5 Tim Southee Rarely less than outstanding, especially in the first innings, when he outbowled both Anderson and Broad to collect his second Lord’s six-for.

7.5 Kyle Jamieson Struggled at first with the slope, but settled into a superb rhythm, and ensured New Zealand stayed on top by removing Root with the first ball of the second day. 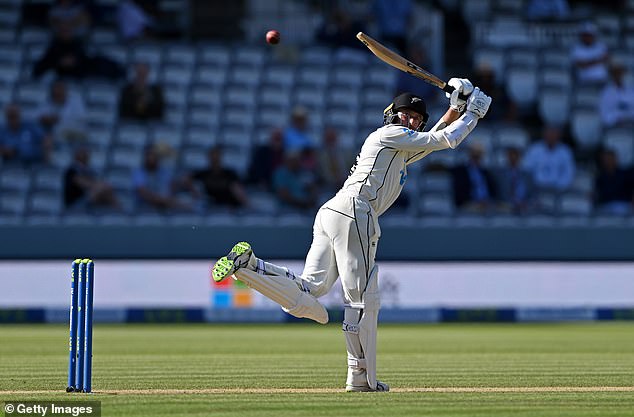 7.5 Henry Nicholls His stand of 174 in 60 overs with Conway set New Zealand up on the first day. England’s young batsmen should take note of his patience.

7 Neil Wagner Added a useful 40 for New Zealand’s last wicket, and bowled with his customary mix of heart and skill. Few celebrate a wicket quite like he does.

6 Colin de Grandhomme Tidy with the ball, rekindling memories of his spell in the 2019 World Cup final at Lord’s, but looked tentative with the bat during his first-innings duck. 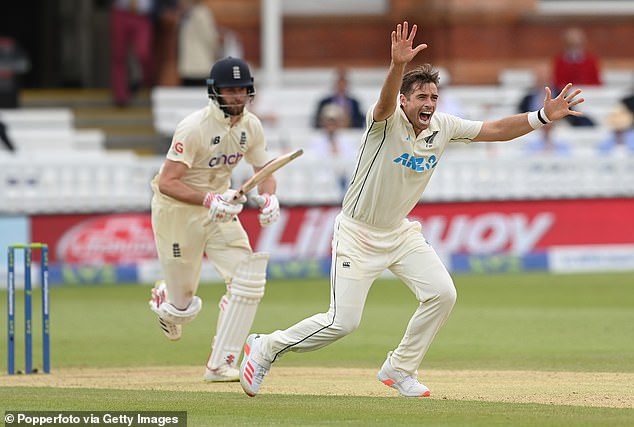 6 Tom Latham Got going twice, but couldn’t cash in. Out-manoeuvred by Broad on the final morning.

6 Ross Taylor Batted selflessly on the last morning in pursuit of quick runs – but looked an lbw candidate throughout.

5.5 Mitchell Santner A quiet game – no runs, thanks to a loose chip off Wood, and no wickets, although he offered some control with his left-arm spin.

5.5 BJ Watling Part of New Zealand’s collapse on the second morning, and missed a crucial stumping to reprieve Burns on the fourth afternoon.

4 Kane Williamson Still to crack English conditions, which is curious for a player of his class. England will be wary at Edgbaston. Good declaration, even if England didn’t take the bait. 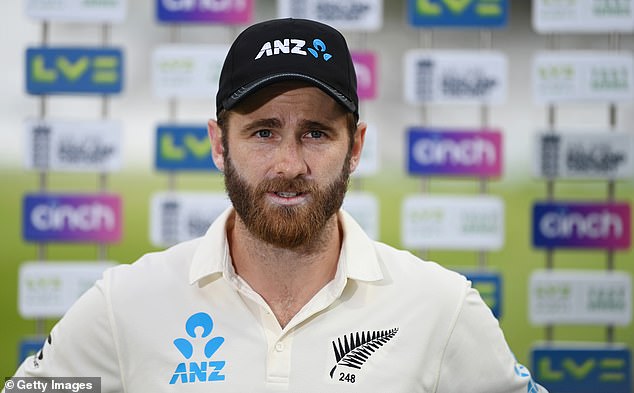 The Ashes LIVE: England aim to end Australia series on a high at the Oval 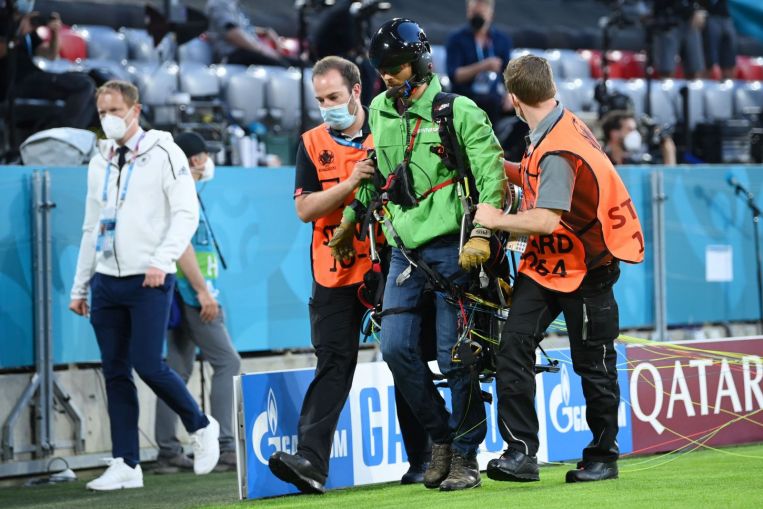