Where international cricket can often be an ego-driven world, with players adopting a facade they feel is needed to succeed, Indian vice-captain Ajinkya Rahane appears more than happy to let others dominate the limelight.

From his current teammates, to former Indian Premier League comrades, to opponents, Rahane – the man who will replace Virat Kohli as captain for the final three Tests this summer – is seen as a gentleman, more than happy to be the yin to Kohli's yang. 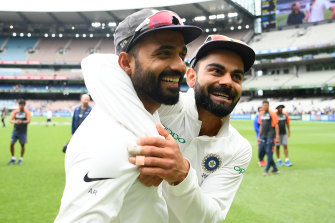 Ajinkya Rahane (left) with Virat Kohli at the MCG in 2018.Credit:Getty Images

Brad Hodge, the former Australian batsman, played alongside Rahane with the Rajasthan Royals, when the boy who grew up in a distant suburb of Mumbai and joined a cricket academy aged seven became one of the hottest properties in the IPL. Rahane had been given little chance with the Mumbai Indians but in 2012 began the glamour tournament with a 98 and 103 for his new franchise.

"He is very true, very loyal, very honest, a nice guy to spend some time around, and is very much – and I don't know whether this is co-incidence or not – the mirror image of Rahul Dravid," Hodge said.

Dravid, the Indian batting legend, had been the Royals' skipper at the time.

"Both have got great qualities, they are happy to communicate with everyone, spend time with all different walks of life. He [Rahane] is well balanced, not ego-centric and loves cricket," Hodge said.

"Long before that, what I knew of him was he was a very gentle individual anyway. Just well-mannered, kind, well spoken, just a nice person to spend time with. He has good credentials to skipper a team, for sure." 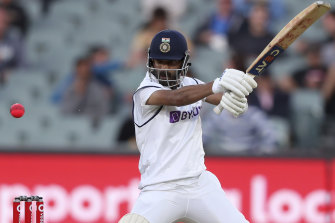 Brad Hodge describes Rahane as a loyal person with good credentials to captain.Credit:AP

Those credentials were on show during the Australia A tour match against the Indians at Drummoyne Oval in Sydney this month. When a strong appeal for caught behind on Nic Maddinson went against the tourists, Rahane, filling in for Kohli, was praised by commentators for ensuring his team refocused quickly.

"He takes the emotion out of the game … and gets on with it," former Australian gloveman Brad Haddin noted.

That ability has also been required off the field this week, as the tourists seek to rebound from a pummelling in Adelaide where pace aces Pat Cummins and Josh Hazlewood may have inflicted mental scars.

Those that know the 32-year-old well warn that his mild-mannered ways belie an intense inner focus to succeed, pointing out he also has a black belt in karate.

Nicknamed "Jinx", he has already briefly filled in for Kohli as captain and done well. The first time was in 2017 for the series-deciding fourth Test against Australia at Dharamsala when Kohli was injured. Rahane made 46 and 38 not out in his team's eight-wicket win. As skipper, he was entitled to front the post-match press conference but Kohli appeared instead. Rahane took it in his stride.

He also led his nation in a one-off Test against Afghanistan in Bengaluru a year later, when Kohli had initially opted to head to England for a county stint ahead of the key Test series there but later was ruled to have a neck injury. Despite Kohli's absence, the host nation prevailed by an innings and 262 runs.

While Rahane may have had success in one-off stints in the top role, captaining in Australia against the surging No.1-ranked nation will be like the "chalk and cheese" analogy David Warner used when describing the difference in personalities between Kohli and Rahane.

Consider this. There are few bilateral series as big as the battle for the Border-Gavaskar Trophy, and the tourists almost certainly need to win in Melbourne to keep the four-Test series alive. Rahane must now settle his side and deal with the impact of losing arguably cricket's greatest batsman, a man whose energy levels make even a sugar hit on a five-year-old appear tame. 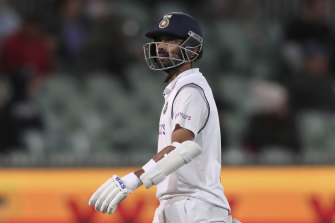 Sunil Gavaskar, the Indian great and former skipper, has no doubt that Rahane can handle the pressure. He will be assisted by steady veterans, including batting wall Cheteshwar Pujara.

"Captaincy will actually help Rahane. He will feel a lot more secure and in control of situations," Gavaskar told The Times of India.

"If you actually have a look, India has won every time Virat was not there, be it the Test in Dharamsala against Australia, Afghanistan Test, Nidahas Trophy or Asia Cup 2018. Indian players do tend to raise their game when he is not around. They understand they have to make up for his absence."

Where it doesn't take much to light Kohli's fuse, Warner said leading into this series that the Australians needed to find a way to unsettle Rahane, a middle-order plank who averages 42.88 in 65 Tests with 11 centuries. Highlighting his inner resolve, that average jumps to 45.16 in 38 Tests on the road. He has seven of his 11 centuries away from home.

In Australia, he averages 41.2 in nine Tests, including a sublime century in Melbourne in 2014, but he fell for a four-ball duck in the second-innings madness of Adelaide. He struggled to get going two years ago, posting only two half-centuries, but his wicket remains a prized scalp as the home side seeks to regain the Border-Gavaskar Trophy.