A Shane Warne-era SCG pitch in the third Test against South Africa will give Australia a preparation bonus for next month’s tour of India, says captain Pat Cummins.

Cummins believes he was still at school when Sydney last offered such a spin-friendly surface.

“They have taken a bit more grass off it. It looks a bit more like an SCG wicket of 15-20 years ago,” Cummins said after arriving for training on Tuesday morning. The Australians will announce their final XI at the toss before play on Wednesday.

The fast bowler said the SCG deck would offer the ideal preparation for the tour of India, where Australia have not won a Test series since 2004.

“It’s a huge connection to India,” he said. “Fast bowling and reverse swing is going to come into it, which we can expect in India. We’ll probably get more spin overs here [in Sydney], our batters are probably going to face more spin here as well. 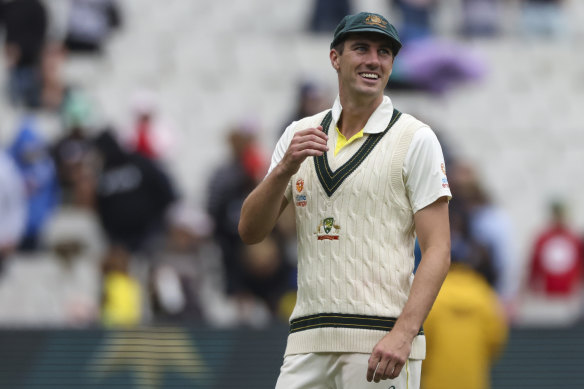 Australia’s Pat Cummins leads the Australian team off the field after victory at the MCG in the Boxing Day Test.Credit:AP

Should Ashton Agar join Nathan Lyon as a second spinner, it will be the first time Australia have played more than one spinner in this country for six years. That was when another left-arm finger-spinner, Steve O’Keefe, joined Lyon at the SCG. They claimed nine wickets between them in the third Test against Pakistan.

Agar’s left-arm finger-spin has been favoured ahead of Mitch Swepson’s leg-spin, which Australia used on tours of Pakistan and Sri Lanka last year.

Cummins said it was time to consider what Australia had achieved in the past year before the Indian tour.

“We’ve got a huge year ahead,” he said. “It might be a good time to pause and think about what a great 12 months it’s been for this team. Pakistan, Sri Lanka were two really good subcontinent tours with a third one in India to come.”

While Australia are clear leaders in the World Test Championship, they still need victory against South Africa in the last Test to be sure of a place in the final, probably against India, at the Oval in June.

Australia were on course to be part of the inaugural WTC final two years ago but were beaten in the last Test against India in Brisbane to lose the series and miss out. New Zealand went on to beat India in the decider.

“Having just missed out on the WTC final last cycle, that was always going to be a big goal [to make this year’s final],” Cummins said.

“I think we’ve been playing fantastically, we’ve put ourselves in that position to earn that spot early which is a huge driver for us. It’s always exciting going to England and playing an Ashes series but adding in a WTC final is huge.”

Dom Bess praises Jimmy Anderson as 'the greatest of all time'