Home » ‘I’m going to throw him under the bus here’: Victorian opener didn’t know the rule 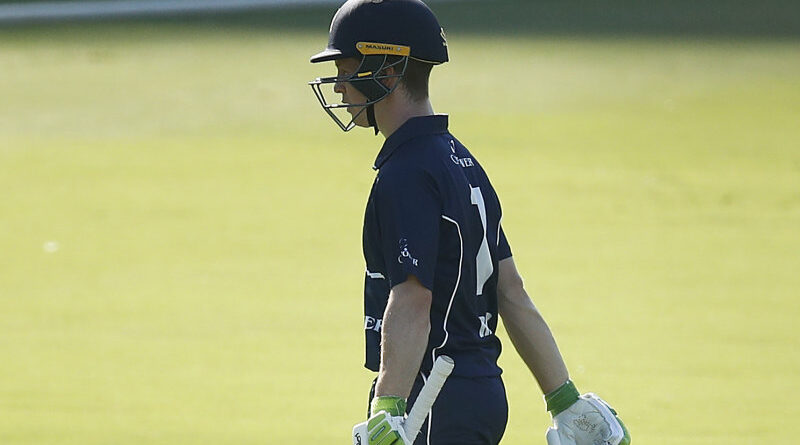 Sam Harper has a long off-season to mull over the vagaries of the obstructing the field rule after falling victim to one of cricket’s most obscure dismissal methods in the final game of the season.

The stakes were relatively low for Victoria’s 21-run win over South Australia at Junction Oval on Thursday, with both sides out of the race for the title. Indeed the result consigned the Redbacks to dual winless campaigns in both the one-day cup and Sheffield Shield.

But for Victorian gloveman Harper there was a particularly unusual moment. Harper hit the ball down the wicket back to bowler Dan Worrall in the sixth over, with Worrall fielding and having a shy at the stumps. Worrall’s throw was on target, but Harper shuffled back to get in between the ball and his stumps.

The South Australians appealed and Harper was sent on his way for seven.

Initially, Harper didn’t think he was out, according to Victorian coach Chris Rogers.

“Whether I have to sit down with him and explain the rules I’m not exactly sure, but probably a pretty good lesson for him, particularly if he’s going to hit balls that far down the pitch,” Rogers said after play.

“It’s a little bit of grey area but I think if he had the chance again he’d do it differently.”

Asked how Harper had reacted to the dismissal, Rogers responded: “It was probably my reaction that was more interesting when he said he didn’t think he was out.

“I’m going to throw him under the bus here. I think we all need to go back and look at it on the replay.”

It had been an otherwise positive week for Harper who posted his maiden first-class century on Monday and also recently re-signed with the Melbourne Renegades.

37.1.1 Either batsman is out Obstructing the field if, except in the circumstances of 37.2, and while the ball is in play, he/she wilfully attempts to obstruct or distract the fielding side by word or action.

37.2 A batsman shall not be out Obstructing the field if

obstruction or distraction is accidental,

or    obstruction is in order to avoid injury.

Peter Handscomb and Jono Merlo both posted tons for the Vics, while debutant Sam Elliott – the son of former Test opener Matthew – took 2-60 from nine overs including the key wicket of Travis Head for 77. Matt Short (3-44) and Merlo (3-45) also made handy contributions with the ball for a highly inexperienced Victorian side.

Looking ahead to next season, Rogers said he didn’t necessarily think Glenn Maxwell would need to play Shield matches for the Vics to earn a Test recall.

“As for the Australian side, having conversations with selectors, whether they pick him out of a Shield competition, probably most likely for a series in India or whatever, I’m not sure that’s necessarily required. It’ll definitely be horses for courses there. Whether they need to see him play Sheffield Shield for Victoria, I’m not 100 per cent sure, but that doesn’t mean we won’t look at that opportunity as well.”

Meanwhile young gun Will Pucovski is progressing well from shoulder surgery but still faces a long road to recovery.

“He’s out of the sling, so I think he’s a pretty happy man at the moment, but that just takes a long, long time, He’s got to be patient and go through it. He’s a pretty mature young man now, with everything he’s been through, so I think he’ll be fine,” Rogers said.

Aaron Finch admits Australia are pumped up for clash with England