Test discard Usman Khawaja knows he remains firmly in the thoughts of national selectors and is casting his net far and wide as he launches his bid for a recall to the baggy green.

In a reflection of the side's stability and the bizarre circumstances created by COVID-19, there is more uncertainty over the Test fixture than there is over the squad on the eve of the Shield season. 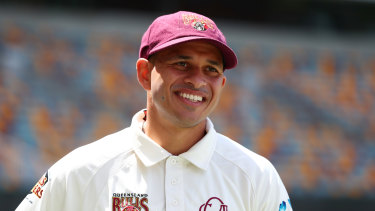 Usman Khawaja remains on the radar of national selectors.Credit:Getty Images

Though the Australian XII picks itself, there will be an expanded squad to cover for injuries and loss of form due to the difficulties in bringing players in and out of a bio-secure bubble.

Justin Langer last month said there was still room for players to bang the door down with impressive performances in the Sheffield Shield, which starts on Saturday in Adelaide.

Khawaja is one such player, while dumped opener Marcus Harris and wonderkids Will Pucovski and Cameron Green can also force their way into the bubble through weight of runs.

At 33 and without a national contract, Khawaja appears to be well back in the pack but the door is far from shut on the former Test mainstay.

In assessing their list of contracted players, selectors gave the veteran a Test ranking even after a wretched 2019/20 season.

But spots in the world No.1 team, which won all five Tests last summer, are not readily available.

If there is to be an opening during the season, it could come at the top of the order but Khawaja, who has hit two tons from seven innings as a Test opener, will bat himself at No.4 for Queensland.

Selector Trevor Hohns in April suggested where Khawaja batted would be a factor in considering him for an opener's berth. Khawaja believes he can bat "anywhere in the top six" if his form warranted selection.

"I've spoken to JL about it, we've talked about it, first and foremost I've got to be scoring runs to be picked back in that Australian team," Khawaja said.

"Wherever I'm batting it doesn't really matter. I've scored first-class hundreds in, I'm pretty sure, every single spot one to six.

"I can bat anywhere in the top six and score runs. At the end of the day if I'm doing that for Queensland I'm giving myself the best chance to put my hand up to play for Australia."

Khawaja said "it sucked" last season when, not helped by some "stinky" umpiring calls, he produced a string of low scores while Test spots were up for grabs. His fortunes did not improve, finishing the summer with just 202 runs at 18.

"Sometimes when it rains it pours. I found that out last year," Khawaja said.

"I got a couple of tough decisions, a couple of stinky decisions as I like to call it, but it's a part of the game. We remember the bad ones, I probably don't remember the good ones. It balances out. The key is not to get too down."

"I've never been the kind of guy to think the world's against me, everything's against me, it's too hard. Alright, just keep training, do the hard work. If you do it enough you'll get the line ball calls your way at some point," Khawaja said.

"That won't happen if you're not training and doing the hard work. It sucked last year when I felt like things weren't going my way.

"It would have been a lot worse if I wasn't doing well and the team was doing poorly. I think you have to take the good with the bad.

"I had a conversation with Gilly a few weeks ago. He said the exact same thing, 'Us cricketers are really good at remembering the bad stuff but not the good stuff that happens to us.'"

Farewell Vernon Philander, an understated genius who was modern cricket’s exception to the rule