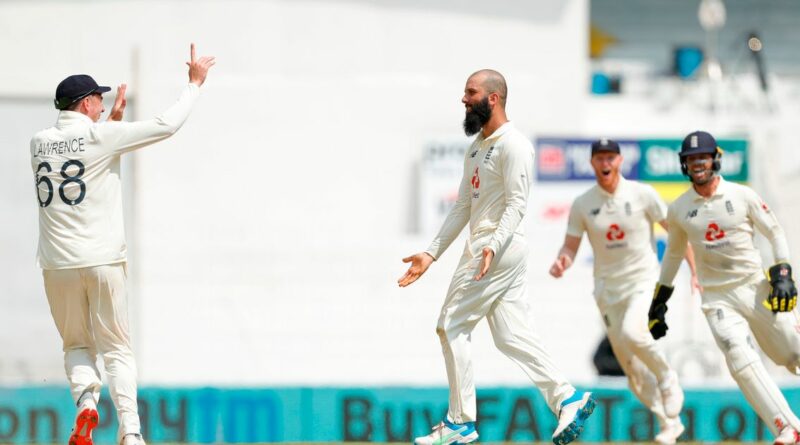 England head coach Chris Silverwood had a face like thunder after a series of umpiring mistakes threatened to cost his team dearly on day one in Chennai.

Silverwood would have already been ticking at the swift decision made on a potential stumping of Rohit Sharma when he had made 159 and appeared to have nothing behind the line when Ben Foakes whipped off the bails.

And then both he and skipper Joe Root couldn't quite believe what they was seeing when the key part of a review for a catch against Ajinkya Rahane was totally ignored by the third umpire Anil Chaudhary.

England thought the ball had brushed the glove after it had rebounded of the pad, but the umpire just didn't look at it, and replays showed that Root was spot on, sparking outrage around the world.

Australian all rounder Glenn Maxwell tweeted: "How can a third umpire not look at that?!?!"

While former England captain Michael Vaughan was a little more forthright when he said: "Is the third umpire pi**ed? He is having a stinker."

Mark Butcher was left fighting a lone battle in the commentary box, highlighting that England had not only missed out on a wicket, but had been robbed of a review too.

This all came after he had decided, on the basis of one camera view that Sharma was not stumped by Foakes even though it appeared to show otherwise.

England assistant coach Paul Collingwood, back in England, was less than impressed when he tweeted: "Erm how many cameras in the ground and there’s only one angle apart from stump cam for that Rohit stumping? Surprising…"

Call it karma or mother cricket, but equilibrium was thankfully reached in both instances with Rohit getting caught in the deep for 161 seven balls later and Rahane being dismissed for just one more on 67 as India finished day one 300-6.

It took a visit to the umpire's room in order to get the review England had used on Rahane to get reinstated, an admission of an umpiring error by Chaudhary, when both he and the umpiring had been pretty good so far in the series.

It certainly wasn't anywhere near as good as Rohit's batting though as he reeled off his seventh Test ton in sublime style, caressing the ball to all parts and sweeping as effectively as Root did the week before.

Vice-captain Rahane dropped anchor alongside the opener in a partnership of 162 for the fourth wicket, in what could already be the match-defining stand of the game.

It made up for the surprise on Virat Kohli's face and the stunned silence in the crowd after Moeen Ali bowled the Indian skipper for a duck to follow Cheteshwar Pujara back to the dressing room.

Root picked up the wicket of Ravi Ashwin for 13 before the close as the dry, crumbling pitch came under scrutiny. India's three spinners will have their say soon enough.

Sounded out: Controversy over Paine dismissal as India seize control

Well done Jonny Bairstow, that was one of your best Test innings