Home » Сricket » ‘It’s acceptable to not be OK’: Women come to terms with mental health

Australian cricket has been rocked by the news three of its biggest stars – Glenn Maxwell, Will Pucovski and Nic Maddinson – have stepped away from the game due to mental health concerns in the past month. 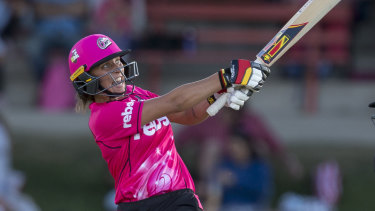 Molineux – who made her Test debut during Australia's victorious Ashes campaign – joined that trio on the sidelines on Friday when she announced she would be taking an indefinite break from the Melbourne Renegades' WBBL campaign.

"You speak to any person within that national set-up – players and coaches – and we all know that it’s totally acceptable to not be OK," Gardner said as the Sixers prepared to face the Scorchers in back-to-back matches in Perth.

"If you’re not OK mentally, you’re not going to be performing very well for the team.

"Making sure that you’re in a good head space – not only for yourself but to be surrounding yourself with other players in a stressful environment – we know how stressful professional sport is and there is a lot of pressure on us to do really well, all the time."

Gardner said that build up of stress could become "very mentally draining" and praised Australian star Nicole Bolton for taking the lead when she stepped away from the game in 2018 to treat her depression.

"Sometimes it’s just not possible [to play] when you are struggling mentally," she said. "It’s very mentally draining.

"Nicole Bolton was one of the more recent ones to take some time away from the Aussie team, which was obviously quite eye-opening.

"She was one of the first to take time out of the female game, but I guess it just showed to both older and younger players that it is OK and people aren’t going to judge you because you are taking time out of the game."

Gardner has had her own issues in her short career, struggled to regain confidence after suffering five concussions. An element of fear still remains within the 22-year-old, who will be one of Sydney's Australian stars who must take the lead against Perth with Ellyse Perry absent due to a shoulder injury.

"I think, realistically, it is always going to be in the back of your head when you have been hit a few times," Gardner said.

"I don’t think it affected me a lot off the field. It was more so a mental thing coming back to the game. That was probably the hardest thing, rather than physically feeling well.

"It definitely had a bit of an impact just getting back into the game, regaining that confidence. I was obviously lacking some confidence after the four or five times that I have been hit.

"I guess now, growing as a player, I’ve just tried to take that in my stride and rather than having it as a negative thought, turn it into a positive one.

"I know sometimes that works in my favour when someone does want to bowl short at me because there it's such a fine line between getting it right and the ball being there to hit."

The Sixers' Saturday-Sunday double header against Perth will have serious consequences for their finals hopes, as the Scorchers are hot on their tail in fourth on the WBBL ladder with just four matches remaining in the regular season.

The Ashes LIVE: England aim to end Australia series on a high at the Oval