Christina Matthews, one of Australian cricket’s leading administrators, has a blunt message for those put out by the game’s move to gender-specific terminology: “get with the times, or get out”.

Australia captain Meg Lanning has welcomed the dismissal of the terms “batsman” and “batsmen”, while Matthews, the Western Australia Cricket chief, and multiple World Cup winner Lisa Sthalekar have also called for further change to the game’s lexicon. 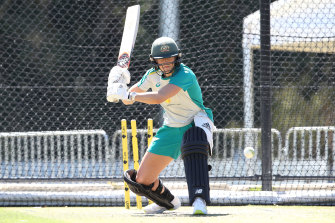 Australia’s Ellyse Perry at training before the series against India.Credit:Getty

The Marylebone Cricket Club have sent the gendered terms to the pavilion, officially amending the laws of the game by replacing them with the gender-neutral “batter” and “batters”.

The move has been criticised on social media as political correctness by some, including prominent UK media identity Piers Morgan, though male players and coaches have increasingly used batter instead of batsmen. Former Australia great Ricky Ponting regularly used the gender-neutral term during his reign as captain in the 2000s.

Traditionalists may have to get used to more change with terms such as “third man”, “12th man”, “nightwatchman” and the “maiden” now under the microscope, though these are not officially recognised by the game.

The fielding position third man is commonly referred to as “third” by commentators, a term Matthews and Sthalekar supports. Similarly, Matthews is also in favour of the 12th man being shortened to 12th, and the nightwatchman turned into the “nightwatcher”.

Matthews says the term maiden is problematic. Applied in cricket to describe an over where no run is scored, it was historically used to refer to a girl or unmarried woman, or a female virgin.

“When you drill down into the core of what that means it’s not that great,” Matthews said.

Sthalekar is in favour of change if it is a barrier to women and girls getting involved in the game, an argument that was put forward in a WhatsApp group she is part of with other female commentators.

“Maiden, fine leg, nightwatchman, is it really stopping females engaging in the game and they feel left out?” Sthalekar said.

“I don’t think it does. That may change over time. Right now, batsman is a term we use all the time. We don’t use maiden, nightwatchman that much.

“I don’t think it needs to be nightwatch-person, now we’re just being difficult. I like the theory if it’s not a barrier, then carry on.”

One term Sthalekar would like to see binned is the “man of the match”, to be replaced with the “player of the match”.

“It will take time for people to get used to it, but it’s not us going woke, it’s just about finding inclusive language,” Sthalekar said.

Former Australia wicketkeeper turned administrator Matthews said the MCC, the custodians of the laws of cricket, had made an important step in scrapping the batsman for batter, a move she had called for in 2017.

“I’m thrilled, someone has to put their neck on the line to get change, so I took the punt a few years ago,” Matthews told the Herald and The Age. “Those people who have used the Laws of the Game as a reason not to change it have to get up with the times now.”

She dismissed criticism it was political correctness.

“It’s easy for people to dismiss it as political correctness, but people who say that are proponents of keeping things the way it’s always been, and we need to evolve as a society.”

Lanning approved of the change, describing it as a “really good step forward”.

“It shows the game is evolving and really up to date with society these days,” Lanning said. “Here in Australia we made that move with the Australian men’s team and the Australian women’s team.

“The language around that might seem small and minor but is really important in the inclusivity of the sport, putting the men’s team and women’s team on an equal footing rather than having one as the main product and the women’s team maybe inferior in some ways.”

Australia spinner Sophie Molineux applauded the MCC for the change.

“It’s heading definitely in the right direction in being a sport for all,” Molineux said.

Meanwhile, opener Rachael Haynes is in doubt for the second one-day international against India on Friday after being struck on the right elbow at training. Haynes starred in Australia’s victory on Wednesday, top-scoring with an unbeaten 93.

Only half of Rudimental will be at World Cup opening party 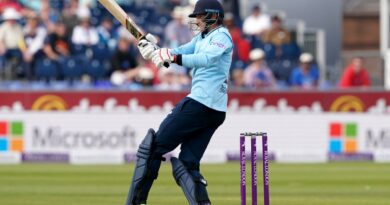