Usman Khawaja believes Justin Langer’s emotions are “letting him down” but supports the Australia coach to take the team through the Ashes.

The veteran batsman, who has not played for Australia since 2019, said Langer was a “very passionate person”.

“He loves Australian cricket, wants the best for everyone,” Khawaja said on his YouTube channel.

“The one thing that keeps coming up about him are his emotions. Yes, the man wears his heart on his sleeve, he can be very emotional.

“Unfortunately that’s probably the one thing that’s letting him down the most but it comes from a very good place. And he knows it, he knows he needs to improve. He’s said it in the media, I’ve chatted to him. He’s trying to improve on it.

“International cricket is a tough place. Having your emotions tested from time to time, that’s just going to happen.”

Before the meeting, Hockley put out a statement backing Langer to the end of his contract in the middle of next year, which includes the Twenty20 World Cup from October in the UAE and the Ashes in Australia, starting in December. 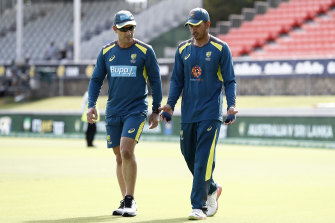 Justin Langer speaks to Usman Khawaja during day four of the second Test between Australia and Sri Lanka at Manuka Oval on February 04, 2019.Credit:Getty

On Friday, Paine said on his SEN Hobart radio show there had been “robust discussions” but signalled an uneasy truce between players and coach. He also backed Langer for the T20 World Cup and the Ashes.

Khawaja, 34, claimed Langer was not solely to blame for the team’s recent poor performances.

“The guys aren’t performing, the players have to take ownership at some stage,” he said.

“If after all that, things are still not going well, if things aren’t gelling, if all the players are back and something is still up and going wrong, that is when you look at things and think ‘OK, maybe do we need to change something’.”

‘People think I got dropped because I spoke up to him, stood up to him and all these other things. It’s actually quite the opposite.’

Khawaja was famously shown on the documentary The Test standing up to Langer, who is also a selector, claiming the players were “walking on eggshells around him”.

However, the Queensland captain, who is a chance to resurrect his career this year given Australia’s recent poor batting, said his relationship with Langer was “really good”.

“I still talk to him, I still text him here and there,” Khawaja said. “That’s because we have a lot of respect for each other.

“People think I get dropped because I spoke up to him, stood up to him and all these other things.

“It’s actually quite the opposite. I feel like I became closer with him. I feel like he gained my respect and I gained his respect because we had some really open and honest conversations together.

“So let’s just stop it right there. There were two people who dropped me for the Ashes, [then chairman of selectors] Trevor Hohn and JL [Langer], so it wasn’t just JL.”

Khawaja believes he did not deserve to be dropped.

“Do I believe I should have been there the last couple of years, do I think I was in the best top six batsmen? In my heart, yes I do believe that. But I don’t select the teams so for me it’s water off a duck’s back,” he said.

Khawaja averages 41 in 44 Tests with eight hundreds. He hit six of those centuries in Australia, where he averages almost 53. It makes him a candidate to join David Warner at the top of the order this summer if he starts the Sheffield Shield season well for Queensland.

However, his overseas recording is disappointing, averaging less than 29 from 20 Tests.

Khawaja claims there is no point worrying about leaks from the dressing room because they have always been part of the game.

“The issue is there is something going on in the Australian team between the players and Justin Langer,” he said.

“Unfortunately, he was involved in a pretty bad West Indies, Bangladesh tour, which wasn’t entirely his fault because the majority of the team wasn’t even there. I don’t think it’s fair to judge him on the last two series.

“How do you think JL feels? He probably feels like the guys in the team are stabbing him in the back. And that’s what it looks like.

“That’s why it’s so disappointing. It’s a really bad look and it’s something the group needs to sort out ASAP.” 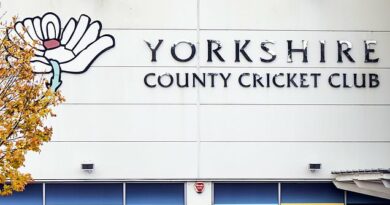 Ashes 2019: Andrew Flintoff would ‘love to be England coach one day’