Australia coach Justin Langer insists the door is not closed on the international career of Tim Paine, saying the former captain has learnt a brutal lesson but may yet have unfinished business with top-level cricket.

Langer on Saturday spoke for the first time about the sexting saga that claimed the captaincy of his close friend Paine, who stepped down from his coveted leadership position once his exchanges with a former employee at Cricket Tasmania were made public.

Paine then stepped away from all forms of cricket, prompting Langer to fly to Hobart to meet his former skipper as soon as he cleared quarantine after arriving home from a successful T20 World Cup in Dubai.

Langer and Paine forged a close bond as they tried to add some moral starch to Australian cricket in the wake of the sandpaper scandal in South Africa and Langer said it was a “no brainer” that he make a trip south ahead of next week’s first Ashes Test at the Gabba.

“He’s one of my really close friends and someone I admire enormously,” Langer said. “He’s probably, certainly in this generation of players, he’s one of the best people I’ve met in the game of cricket.

“He’s been our captain for a long time; he and I have been on a journey, like we have with all this group. He’s one of the best people I’ve met in cricket, so it was nice to go down and see him. 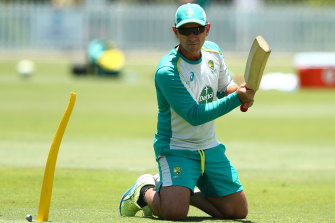 “He’s obviously shattered with what’s happened because he’s been such an exemplary figure in Australian cricket, for the last four years particularly. You’d have to ask him how he’s going. All I know it was important to go and see him.”

Paine has given no indication when, or if, he would return to any form of cricket and things move quickly in professional sport. Alex Carey is Australia’s new wicketkeeper, while Pat Cummins will make his captaincy debut against England on Wednesday in Brisbane.

However, Langer suggested it may be premature to suggest Paine has played his last match of elite cricket, although he had more pressing issues confronting him while his former teammates prepare for a high-profile home series.

“He loves cricket,” Langer said. “He’s 37, but he’s as fit as any athlete in our squad and we have some fit athletes here. He looks after himself so well; he’s very focused. His No.1 priority at the moment is his family, as you can imagine, and that’s how it should be. But I’m not sure we’ve seen the end of him. We’ll wait and see, that will be his decision.” 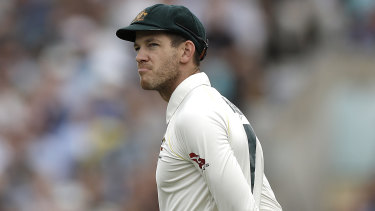 Paine said in his only interview after the texts went public that Langer had urged him not to step down in haste. Langer would not be drawn into that, nor did he offer any comment on the Cricket Australia board’s handling of the matter then and now.

“I’m very sad for what’s happened,” he said. “And now it’s hypothetical, so it doesn’t matter.”

Langer admitted he knew something of an incident when Paine was appointed but had no detail and was under the impression it been handled by Tasmanian officials at the time. But he said he only knew the scope of the matter a few days before Paine’s decision to step down from his leadership role.

“I had heard about it – I think I was getting on a bus on the way to England – about an incident,” Langer said. “Painey told me about it – that was four years ago. Literally, the first I heard about it after that was a day or two days before he resigned.

“I had no idea about an investigation, I didn’t know anything about that. I know the full story now and the context of it all and I certainly didn’t know it before. Whatever other people make of it is completely out of my control.”

Langer spoke of the pitfalls of searching for perfection from high-profile athletes who operate in the glare of the public. It was something he encountered, he said, when Steve Smith, David Warner and Cameron Bancroft were castigated and punished for their behaviour in South Africa.

“If you want to be in this business, you learn to grow and evolve,” Langer said. “You’re always under the spotlight. We live in a world of perfectionism, don’t we. We’re a very judgmental society.

“As I said in my very first press conference, when I was asked about Steve Smith and David Warner and Cameron Bancroft, there’s not one person who is asking questions or on the camera or is listening or watching who hasn’t made a mistake in their life.

“Our captain, one of the best, made a mistake and he’s paying a heavy price for it. What I see in this job and in the society we live in is that it can be brutal, but you learn your lessons. We live in an unforgiving society and that’s a real shame.”

Forward-looking Warner ‘has no intention of appealing leadership ban’ 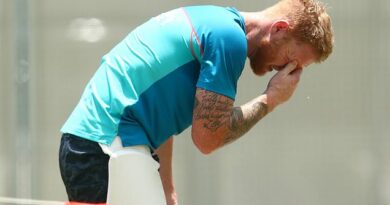 Four-year World Cup plan on the line as England stumble