Test cricket is back and I cannot wait to get out there and get started again. It has been a long time coming.

We all know why we’ve had this long break and we also know that things are not back to normal yet.

But thanks to the huge work of so many people at the ECB and thanks to the ­support of West Indies cricket, we are going to be able to put on a show and I hope you all enjoy it.

It will be a special day for me, as I will be leading the team out for the first time with Joe Root unavailable, and there is huge pride there, but my focus is on the job, not on the bells and whistles.

I’ve been told that I will be the first player from Durham to ­captain the ­England Test team. I must admit I thought Paul Collingwood had done it before, but it turns out this is one ­record I have beaten him to.

In 27 years as a ­first-class county, Durham has been very successful in producing ­players to play for England.

We might not have quite the Test history of a ­Lancashire or ­Yorkshire, but now we will have also had one of our own lead the national side and that will make it a ­special day.

I have spoken about taking a positive approach to my job as captain and I think that is the way we’ve generally gone about things as a team for a while now.

We always play to our strengths and think about what we can do first, before we worry about the opposition and that is a positive mindset.

The one thing I’m expecting from the team this week, above all else, is 100 per cent ­commitment throughout the five days because it will take a huge effort from everyone in the team to get the win we’re ­looking for against a quality West Indies team.

It is an unusual set of ­circumstances we are playing in. We’ve got no crowds, which we’re not really used to in our Test grounds, but we are ­certainly going to have a big ­audience in terms of people watching at home.

This will be the first major ­international fixture played since lockdown and that will bring a lot of attention, with so many millions of fans supporting us and wanting us to do well.

All I want to see is that total commitment from the players and not letting the fact that there is no crowd there be used as an excuse for any drop in our intensity level.

I had my first selection ­meeting the other day which was an interesting experience.

It is part of the job and it was nice to see how it all works and to have an input into things.

I’m not going to give much away on the team, I’m afraid, other than to say I will be fulfilling the same role that I have done over the last couple of years – that won’t change in terms of my batting position and the overs
I bowl.

This is a one-off Test for me being captain and I want to do the best I can, which means staying true to myself and just being me.

I’m not thinking too much about speeches or anything like that. If I’ve got something to say, I’ll say it.

The fact is the West Indies have the bragging rights and the Wisden Trophy from the last series and we want
both back.

Nothing will help that more than ­getting off to a good start this week before I hand back the reins to our ­captain
Joe. 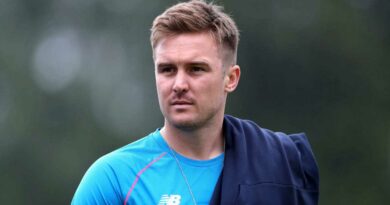