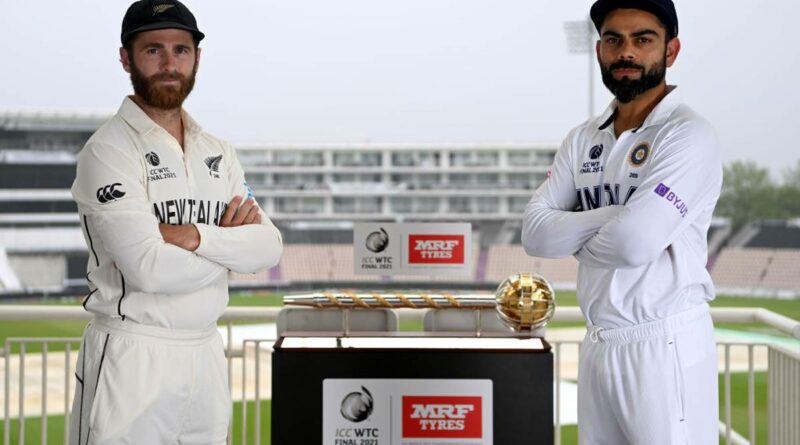 All the action and commentary from day one of the World Test Championship final between the Black Caps and India.

New Zealand take on India in the inaugural edition of the World Test Championship final beginning Friday, with a $2.24m prize up for grabs for the victor.

The two sides were judged to be the best in test cricket after competing for nearly two years against seven other countries and will now face off on neutral territory in England, a rare sight for world cricket.

New Zealand have never played a test at the venue – Southampton’s Rose Bowl – while India have lost their only two encounters at the ground, the most recent a 60-run defeat in 2018 where neither team passed 280 in an innings.

Of the three tests played at the ground last year, two finished in draws with rain falling on all five days in the first test between England and Pakistan.

Rain is once again forecast to affect this match with the UK’s Met Office predicting light rain and moderate breeze for the duration of the event.

However, there will be a sixth day available if any time was lost due to rain. If the match is still drawn, then both New Zealand and India will share the trophy.

Reaching the final continues a remarkable run for the Black Caps across cricket’s three formats since breaking their semifinal duck in 2015 to reach the ODI World Cup final.

They were defeated by co-hosts Australia at the MCG on that occasion before four years later repeating the effort, only to be denied victory in a Super Over defeat to hosts England, with the final decided on boundary countback.

In the test arena the turnaround has been remarkable.

In 2013, New Zealand were rolled for just 45, their third lowest total, in 19.2 overs, against South Africa in Cape Town. Only Kane Williamson made double figures as New Zealand hit rock bottom.

At the time, the Black Caps slipped to eighth in the world test rankings – their worst ranking.

Following their clean sweep of West Indies and Pakistan this summer, the side reached the pinnacle of test cricket’s world rankings for the first time and are ranked No 1 in the world entering this contest.

Since Williamson took over as captain from Brendon McCullum, who led the 2015 World Cup run, the Black Caps have won 22 of 37 tests, with another two victories under Tom Latham.

India, meanwhile, have won four of their six test matches so far in 2021 with just one defeat. However, the side have not competed in a test match since March.

The Herald will provide live updates at nzherald.co.nz/sport while Gold AM will have exclusive radio commentary. The test will be broadcast live on Sky Sport 2 with live streaming on Sky Sport Now.

The Alternative Commentary Collective will also be commentating every ball on iHeart Radio and on Radio Hauraki. Plus watch along with the team on The ACC’s Facebook and YouTube channels.