For all Craig "Billy" McDermott achieved across 71 Tests and 138 one-day internationals playing for Australia, his greatest influence might have come as a coach.

Having taken 18 wickets to help Australia to the 1987 World Cup, McDermott – who on Monday night will be inducted into the Australian cricket hall of fame – was back at it again 28 years later, hatching a plan that set the tone for another Australian world title. 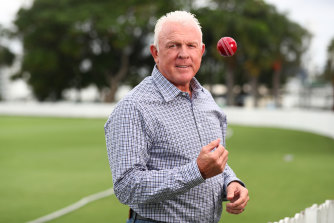 It was the 2015 World Cup, and McDermott was bowling coach for Australia – a post he would leave in 2016.

Together with Mitchell Starc, McDermott formed a secret tactic to york New Zealand star Brendon McCullum early in his innings during the final at the MCG.

The Black Caps batted first, and the ploy worked a treat, with Starc charging through McCullum's defence to bowl the New Zealand captain for a third-ball duck.

"That was my biggest moment ever, being able to put that together with Mitchell. We did that by ourselves and on the quiet and it came off on the day," McDermott said.

"The boy knocked his stumps out and I jumped about three metres out of my chair."

But despite a satisfying stint as the national side's bowling mentor, including shaping Peter Siddle's resurgence early last decade, McDermott – who still does some junior coaching amid other business interests – says he has no desire to return to the professional coaching ranks.

"I've got other things I've got on. I've done my time. I enjoyed it, and by the end of my time, I don't want to sound like a dickhead but I was actually getting a bit bored."

His playing record speaks for itself: 291 Test wickets and 203 ODI scalps.

There were many highlights: six wickets, including those of Viv Richards and Clive Lloyd, on Test debut against the mighty West Indies in late 1984, 30 wickets in the following year's Ashes series when just 20, that '87 World Cup showing.

It wasn't completely smooth sailing. When he returned from that tournament on the subcontinent, McDermott lapsed into some bad habits and lost his place in the Australian side, before legendary ironman Trevor Hendy helped turn things around.

"I had a fat spell, was out of the team for 18 months and I trained with him for two weeks in the winter of '89, didn't drink for 18 months. Dairy products were out, sugars were out," McDermott said.

"I just came home from the World Cup and thought I didn't have to train. We didn't have dieticians, people monitoring all that sort of stuff back in our day, so it was easy for a young bloke to fall off the back of a truck and I did, but I got back on the truck by myself, I didn't really have anybody from a cricket side have any influence on that at all."

These days McDermott keeps an eye on his son Ben, the fringe Australian white-ball batsman. Craig says that while the two of them talk about cricket over the phone he is careful not to muddle his son, who has his own coaches.