The preparation for India’s summer Tour of Australia is heating up after an absorbing battle between Test stars Mitchell Starc and Marnus Labuschagne.

In the clash against NSW at Adelaide’s Karen Rolton Oval, Queensland was sent in to bat on a green top wicket with the Bulls getting off to a handy start before falling into a hole.

At 1/85, Queensland lost 3/30 which saw Joe Burns, Usman Khawaja and Matthew Renshaw all in the pavilion.

But at the other end was Marnus Labuschagne with the right hander putting in another sensational century in trying conditions.

The Test star plundered his second straight ton with 117 off 203 balls before being dismissed with the second last ball of the day.

Having linked for a 136 run partnership with Jimmy Pierson, who hit 66, Labuschagne was in fine form.

With Test teammates Starc and Nathan Lyon lining up for NSW, it was far from easy going.

On 15 just before lunch, Starc hit Labuschagne with a brutal bouncer.

Friendly fire from Mitchell Starc to his Australia teammate Marnus Labuschagne in the #SheffieldShield ??

How do you expect the duo to perform in the #AUSvIND Tests later this year? ?pic.twitter.com/3dkyqHITPd

Then, when he was 39 from 92 balls, Starc gave Labuschagne a warning after leaving his crease at the nonstrikers end as the New South Welshman came in to bowl.

Starc pointed to the crease as the pair shared a few words.

“Needing something to get him fired up here,” the commentators said.

He appeared to be warning Labuschagne of a Mankad, in which a bowler runs out a batsman at the nonstrikers end who is backing up too far before the bowler releases the ball for a delivery.

WATCH STARC’S WARNING IN THE VIDEO PLAYER ABOVE

The Mankad was in the news recently when Ravi Ashwin warned Aussie captain Aaron Finch in the IPL in early October.

Chairman of selectors Trevor Hohns was in the crowd for the clash and would have liked to see both men go at it ahead of the summer of international cricket.

But Labuschagne showed he was unflappable once again, hitting his 15th century with a reverse sweep of Lyon. But always the perfectionist, Labuschagne left the ground in a rage after being given out LBW to Trent Copeland.

Queensland finished the day at 7/274.

Victoria have run through South Australia for just 200 runs, handing Test hopeful Will Pucovski a perfect platform to impress as an opener after a surprising move.

After needing to quarantine through the first rounds of the Sheffield Shield, Victoria finally started its campaign, routing the home side.

Henry Hunt hit 50, while Harry Nielsen’s 40 and Wes Agar’s 41 off 44 cameo at the end of the innings saved the Redbacks but it hardly seems enough.

Aussie Test hopeful Will Pucovski then lined up as an opener for Victoria, walking out with Marcus Harris as the pair guided the Bushrangers to 0/38 at stumps.

“I just felt it’s the right team balance for a challenging year, with young bowlers, and Will has the skills to be an excellent opening batsman,” Victorian coach and former Test opener Chris Rogers said.

South Australia had no answers to Victoria.Source:News Corp Australia

“It wasn’t the ideal preparation but having that delayed start to the season allowed our young quicks to get ready and that showed,” Sutherland said.

“I thought it was good for a few of our debutantes to be bowling first. They could have had two or three wickets each. I think we’ve already clicked pretty well.”

MARSH TURNS BACK THE CLOCK

Shaun Marsh has reminded selectors he’s still available for Test cricket with an important century to save Western Australia.

Having fallen to 3/23 before 5/64, Marsh launched a rescue mission against Tasmania.

Joined by Josh Inglis, who chimed in an important 51, Marsh played the anchor, batting though the innings before being the second last batsman dismissed.

Bowler Cameron Gannon also showed some skill with the bat, hitting 58 off 72 as the Warriors batted their way back into the match.

Western Australia were dismissed for 302 late in the day, getting four overs at Tasmania, who finished the day 0/6. 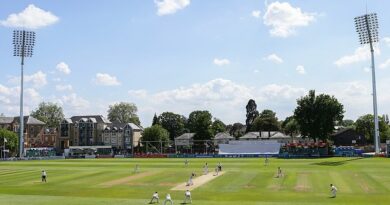 Blow for tier-two counties in any revamped domestic system