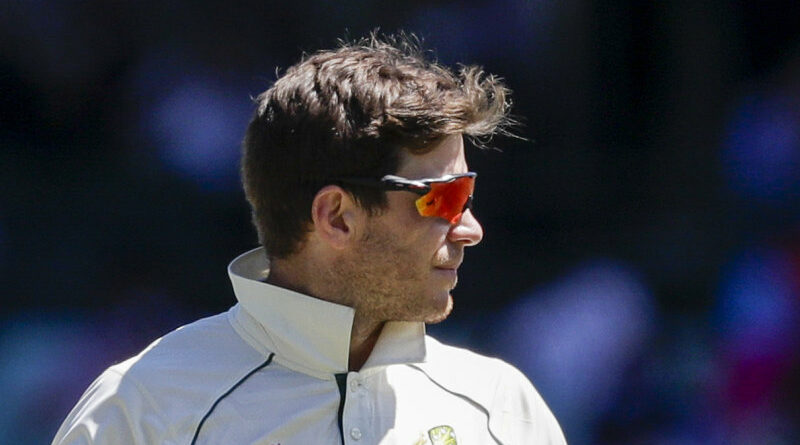 But with Wilson having begun a second life in the game as an umpire and been officiating in the Sheffield Shield since 2010, he is no stranger to the Australian players. 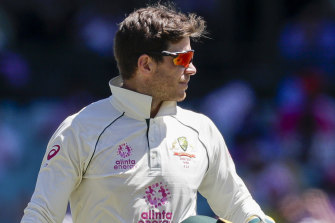 Tim Paine faces a fine or suspension for his outburst on Saturday.Credit:AP

In an interview after his hundred on Friday, the familiarity was clear when Steve Smith referred to him by his nickname "Blocker".

On the third day of the third Test on Saturday, Paine did just the same, although the tone was very different, his frustration with the Decision Review System bubbling over with an expletive-laden on-field complaint directed at Wilson.

The remarks, picked up on the stump microphones and broadcast on television, weren't the only ones that have gone to air unintentionally during the third Test; Andrew Symonds and Shane Warne had already made derogatory comments towards Marnus Labuschagne that belong in another category.

But Paine faces being docked part of his $15,000 match fee if he's found to have committed a level-one offence under the International Cricket Council's code of conduct. If hit with a level-two charge, it could cost him a Test match.

Paine's troubles with the review process stretch back well before this summer, but in Sydney the captain and Australia have been tying themselves in knots with it.

The wicketkeeper was already irritated about the DRS, indicating last week he believed Wilson had rushed to a conclusion when he was the television umpire and had controversially given him out during the Boxing Day Test in Melbourne.

After urging "f—ing consistency, Blocker" to Wilson when Cheteshwar Pujara was spared by television umpire Bruce Oxenford on Saturday, Australia had another issue with the DRS on day three when Oxenford found no conclusive evidence Labuschagne's first ball of the match had touched the glove of Rishabh Pant before being caught down the leg side by Paine.

The Australians were so confident that Labuschagne was celebrating, clapping his hands in the team huddle as replays were played on the big screen.

Paine refrained from firing up again when Pant was given the green light but was obviously disappointed, kicking the turf.

His outburst on Saturday was not the first feisty exchange between an Australian team leader and a member of the all-Australian group of match officials this summer.

Last month, coach Justin Langer protested match referee and former teammate David Boon's approval of a like-for-like concussion substitution in animated fashion beside the players' race during a white-ball match between Australia and India in Canberra.

Whether having match officials who the Australians know so well has somehow changed the unofficial rules of engagement in this series is unclear. But it's hard to imagine Paine dropping the f-bomb in such a way to an overseas umpire such as Richard Kettleborough or Marais Erasmus.

While Langer escaped without a blow to the hip pocket at Manuka Oval as Boon let him off, Paine may not be so lucky.