Home » Сricket » ‘Pretty hard to go past’: Khawaja firms for Hobart retention as net closes in on Harris

Australia captain Pat Cummins has backed comeback king Usman Khawaja to play in the Hobart Test, as support fades for battling opener Marcus Harris to retain his place in the XI.

The hosts also face a selection issue with their quicks as they count the cost of their unsuccessful bid for victory in Sydney, with new sensation Scott Boland under an injury cloud and questions over Mitchell Starc’s stamina to play out the whole series. 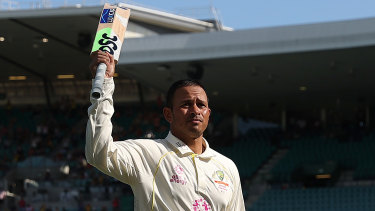 Usman Khawaja made an emphatic case to be retained for the fifth Ashes Test in Hobart.Credit:Getty Images

In a match where about 60 overs were lost to rain, Australia paid the price for six dropped chances and a wicket from a no-ball as England defied the odds to save the game, costing Cummins’ men the chance to join the sides of 2006/07 and 2013/14 in completing an Ashes whitewash on home soil.

Player of the match Khawaja may be resigned to joining the rare club of players being dumped after twin tons, but he has supporters in high places in Australian cricket who believe he is now indispensable.

Former captain Ricky Ponting and Simon Katich have both called for the veteran left-hander to play in the fifth Test, while selector Tony Dodemaide was non-committal when asked about the duel between Khawaja and Harris.

With Travis Head guaranteed an automatic return, the final place in the XI is at the top of the order. Khawaja is not a specialist opener but averages nearly 97 in that role for Australia, including a ton facing the pink ball in 2016.

Though Khawaja does not open for Queensland, selectors picked him in the squad confident he could bat anywhere in the order.

“That’s why he was the spare batter and picked in the squad originally, I felt he could replace any batter one to six really well,” Cummins said.

“I think he’s hugely versatile. I know there have been question marks, historically, over him playing in Asia, but you see how well he’s played spin recently, reverse sweeping, sweeping, he’s someone who is in total command of his game.

“That’s why you love experience. Two centuries, it rarely happens in a career.

“If someone hits a twin hundred it’s pretty hard to go past them for the week after, I think. If someone is running hot and a got a heap of experience like Uzzie, the way he played was fantastic.”

Ponting, a close friend of selector Justin Langer and arguably the most respected pundit in this country, was sympathetic to Harris but said the opener had not taken his opportunities to keep his place ahead of Khawaja. 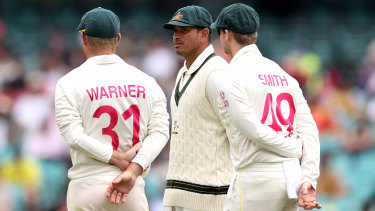 David Warner, Usman Khawaja and Steve Smith of Australia look on during day five of the fourth Test at the SCG.Credit:Getty Images

Selectors have invested heavily in Harris but have not been rewarded for their faith. With just three half-centuries and no tons from 26 innings, Harris could not consider himself unlucky to be dropped, though his form has improved in the past two games.

“What I’ve seen, if I’m trying to answer the question of who is the better player, the better batsman, now out of what I’ve seen from Khawaja or Marcus Harris, then it’s pretty clear to me Khawaja is a better player right now than what Harris is,” Ponting said on Channel Seven.

Boland is battling rib soreness after crashing to the turf just before tea on day four. The seamer was the pick of Australia’s bowlers, backing up his dream debut with seven wickets.

Such is the faith Cummins has in the Victorian, he gave Boland the ball in the closing overs, but the fading light prevented the paceman from being used.

Starc’s average of nearly 53 in the fifth Test of a series suggests he struggles with the workload, but in his favour is that he is a wizard with the pink ball. Jhye Richardson and Michael Neser are waiting in the wings if pace reinforcements are required.

“I think we’ve got six or seven days, so we’ll take our time, we’ll see how all the bowlers put up,” Cummins said. “Scotty was a little bit sore. [It’s] too early to talk about all those things until we get down there, have a look at the wicket and see how everyone pulls up.” 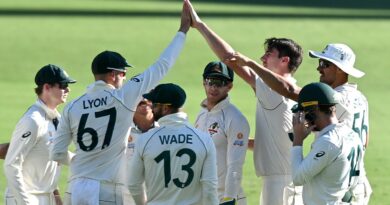 ‘England have been too nice’: McGrath unimpressed with ‘matey’ Ashes