Limited overs specialist Kane Richardson is putting family first and has withdrawn from the squad for the upcoming white-ball matches against India, making him the first local player to miss Cricket Australia's international hub.

The Adelaide-based paceman was to have been part of a large group of players flown at short notice to Sydney on Tuesday after the coronavirus outbreak in the South Australian capital, but told selectors he wants to remain home to be with his wife and newborn son. 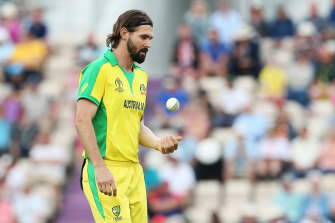 Australia’s Kane Richardson has pulled out of the India series to remain with family over summer.Credit:PA

Western Australia’s Andrew Tye has been called into the squad as Richardson’s replacement.

Richardson is the first Australian player to rule himself out of national duty, with CA well aware of the mental and emotional toll the extraordinary circumstances on its cricketers.

A regular fixture in Australia's white-ball squads, Richardson turned his back on a massive payday in the Indian Premier League so he could be home for the birth of his child.

Some players are facing months away from home due to biosecurity protocols imposed by Cricket Australia to ensure the game's $300 million season is not jeopardised.

His withdrawal from the series means he is unlikely to play for his country this summer, with Australia’s next limited-overs assignment not until February.

"It was a difficult decision for Kane to make but one which has the complete support of the selectors and the entire playing squad," national selector Trevor Hohns said.

"Kane wanted to remain in Adelaide with Nyki and their newborn son. We will always support our players and their families; even more so given the challenging environment we are in.

"We will miss what he brings to the team but completely understand and support his decision."

Tye was part of the extended squad which toured the UK but did not play in the six one-day internationals or Twenty20s. He is considered a like for like replacement for Richardson.

"AJ is incredibly skilled in both forms of the short game. He impressed in the UK with his high work ethic and his positive energy around the squad," Hohns said. "He is a great player to be able to call on."

West Australian D'Arcy Short also flew to Sydney as a precaution and will train with the Australian squad next week, along with Josh Phillipe, who is in hotel quarantine in Sydney after his return from the IPL. The pair will then join their respective BBL teams for the start of the tournament.

ECB set to postpone inaugural season of The Hundred competition