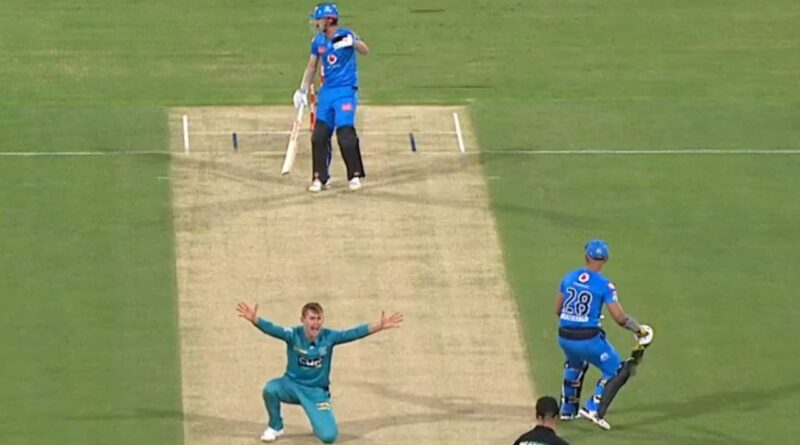 You can’t turn Marnus Labuschagne off.

The most enthusiastic cricketer in the country was at it again on Friday night as the Brisbane Heat kept its Big Bash title chances alive with a nailbiting six-wicket win over Adelaide.

Labuschagne missed out with the bat, scoring just six as his side chased down the Strikers’ 7/130 with seven balls remaining, but made his mark with the ball — and with the microphone.

Bowling his part-time leg-breaks, the Australian Test No. 3 picked up 3/13 from three overs and wasn’t he happy about it.

Mic’d up to provide Fox Sports viewers with an insight into the game, cricket fans copped a gobful from Labuschagne.

He kept chirping Australian teammate Travis Head when bowling to the left-hander, and his wild LBW appeal from a delivery that clearly hit Head’s bat or glove was in danger of bursting eardrums around Australia.

“Is that in a foreign language, that appeal?” Mark Waugh said in commentary for Fox Cricket.

Cricket broadcaster Adam Collins tweeted: “Even by Marnus’ standards, that’s a wild appeal. Imagine what umpires must say about him.”

His celebration when he dismissed Head, caught at long on for 12, was just as loud.

“Yeeeaaahhhhh! There it is, flatter wrong’un. Yeah boy!” Labuschagne said.

Not everyone was a fan of the antics. Journalist Tom Chadwick tweeted: “Pls mute Marnus. I just want to watch the cricket in relative peace.”

Cricket statistician Ric Finlay added: “Can someone take the mic off Marnus please?

“Can do without the shrieking!”

Labuschagne’s voice was part of this summer’s soundtrack, as viewers regularly heard his encouragement from close-in fielding positions during the Test series against India.

It led captain Tim Paine to mock him in Sydney, saying he was finally finding his voice again after scoring some runs at the SCG while Shane Warne was heard in commentary telling the Aussie star to “just bat properly” rather than focus on copying Steve Smith’s obscure mannerisms at the crease.

“Marnus bats best when he forgets all the exaggeration stuff, like calling, ‘No’, ‘Yes’ and ‘Wait on’ really loudly and waving his bat around,” Warne wrote in an exclusive column for News Corp Australia earlier this month.

“I like it when he just bats — and that’s why I said to Andrew Symonds that he should ‘just bat properly’.

“I’ve communicated with Marnus about what unfortunately went to air last week and I’d like to apologise for swearing on TV.

“Marnus had no issue. He thought it was funny and had a laugh about it and so did his teammates. Andrew has also apologised to Marnus for what he said, too.”