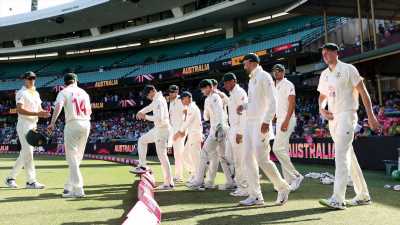 How does this Test play out from here?

Khawaja ‘resigned’ to not playing in Hobart

Usman Khawaja has made himself all but irreplaceable in the Test team after a second immaculate century put Australia into a winning position against England at the Sydney Cricket Ground.

However, Khawaja is “resigned” to not playing the last Test in Hobart.

The regal left-hander followed his joyous first innings’ hundred with a dominant, unbeaten 101 on Saturday as Australia set England a record-breaking target of 388 to win the fourth Test.

England will resume on Sunday at 0-30, their best opening stand of the series, after Australian captain Pat Cummins took his time declaring at 6-265.

By then Khawaja reached three figures and exciting young all-rounder Cameron Green had regained his touch with an ever more dominant 74.

The best fourth innings run chase at the SCG is Australia’s 2-288 against South Africa during 2005-06 and for England it’s 5-194 more than a century earlier.

We’re back, again. Day five is upon us and the equation is simple.

England need 358 more runs to win, after finishing day one at 0-30, while Australia require 10 wickets to go ahead 4-0 in the series.

Can England do it? It would be, undoubtedly, one of their finest moments in history if they could, given the circumstances.

First ball is at 10am, with Australia having 98 overs at the tourists, provided rain doesn’t spoil the party. 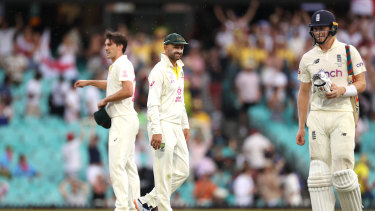 Nathan Lyon has a chat to Zak Crawley as he walks off the SCG after day four. Credit:Getty 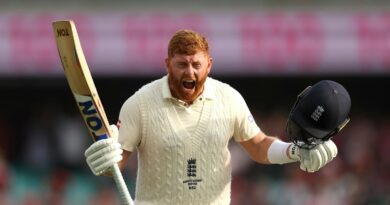 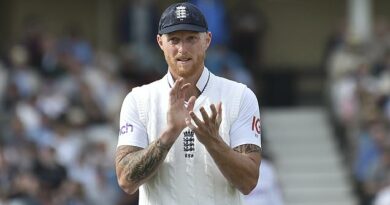 NASSER HUSSAIN: Stokes' approach fine if the ball is doing something