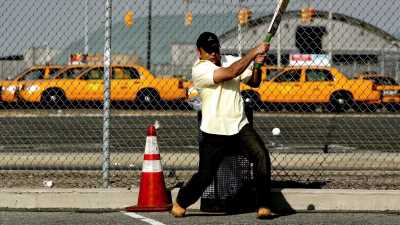 New York: The moment that Nancy Johnson saw the gentlemen in white throwing and batting on the thin, sandy pitch carved into Walker Park on Saturday, she flashed back to the 1950s. As a young girl, she had gone with her father, who was from Grenada, to the same park on Staten Island, sometimes with a picnic basket, and watched.

Almost 70 years later, on a rare visit back to New York, Johnson stumbled upon the same scene on a walk with a childhood friend. 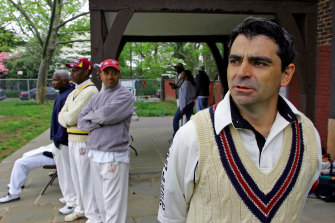 Joseph O’Neill, a member of the Staten Island Cricket Club, in a cricket tournament in Walker Park on the island in 2008.Credit:Andrea Mohin

A cosmic coincidence brought Johnson, who lives in Portland, Oregon, to the park that particular day, for on Saturday, the gentlemen in white were celebrating the 150th anniversary of the Staten Island Cricket Club, the same club she had watched decades ago. Until Johnson appeared, the person present at the park with the longest connection to the club was president Clarence Modeste, who joined it in 1961 and perhaps played in front of Johnson and her family.

“That is quite fortuitous, her appearing here on this day,” Modeste said after meeting Johnson. “Maybe it says something about the club and its history.”

Since 1872, when a group of British financiers living in New York gathered to play one of the world’s most popular sports, the Staten Island Cricket Club has been a quiet, but durable, fixture. 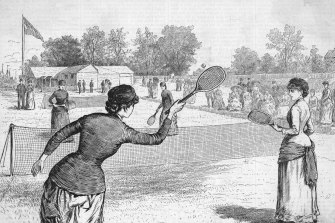 A drawing from 1883, of the Ladies’ Lawn Tennis tournament held at the Staten Island Cricket Club grounds.Credit:Getty Images

Originally launched as the Staten Island Cricket and Baseball Club, it is older than Major League Baseball itself, which considers its first year to be 1876, when the National League was organised. The cricket club is older than Coca-Cola and the invention of airplanes. The club’s batsmen were hitting sixes on Staten Island 20 years before basketball was invented.

According to Modeste, the club is the oldest continuously operating cricket club in the United States, separating it from a few older clubs that play cricket now, but only after stopping for decades. A retired radiographer and department manager at Columbia-Presbyterian Medical Centre, Modeste, 92, joined the club soon after immigrating to Brooklyn from Trinidad and Tobago.

“We are very proud to say that in 150 years, the Staten Island Cricket Club has played cricket every single year, even during COVID,” he said.

That was one of the few years in the last century and a half that the club did not play at Walker Park, the historic ground that also hosted Davis Cup tennis in 1880. Unable to assemble in New York City because of the pandemic, the club instead played a season in New Jersey. Otherwise, the ground originally known as Livingston Park has been the anchor for a club unobtrusively tucked into a corner of the city, within hollering distance of Bayonne, New Jersey.

“The magic of it all is that it’s in New York City,” said club member Joseph O’Neill, whose 2008 novel, Netherland, takes place amid Gotham’s cricketing subculture.

The original home of the club was in St George, near the site of the Staten Island Ferry terminal, but it moved to Walker Park permanently in 1885, 38 years before the Yankees moved from Manhattan to the Bronx. Back then, the club was often featured in local newspapers, including The New York Times, which reported on August 6, 1888, that the Staten Island Cricket Club would play Newark in three days, and that with membership rising, “the club was never in better condition”.

It looked in fine form Saturday, as local politicians joined players, family members and a handful of loyal spectators for the sesquicentennial celebrations. Representative Nicole Malliotakis brought a congressional proclamation of recognition. Another, from Mayor Eric Adams, which declared Saturday to be Staten Island Cricket Club Day in New York City, sat on display outside the old stone clubhouse, where players, family members and guests enjoyed a tea of Indian food, coffee and bagels.

On Saturday, Staten Island beat the visiting Gentlemen of Philadelphia, led by Surendra Potupureddy, surpassing their opponents’ total of 111 runs with 11 balls to spare. Originally from Vizag, India, Potupureddy said he was shocked when he moved to the United States six years ago and found “there is so much game here.”

Chris Sargeant, a financier from London, flew to New York last week specifically for the event. He had lived in New York from 2002 until 2007 and joined the club for the same reasons his British forebears formed it in the 19th century: a love of cricket. 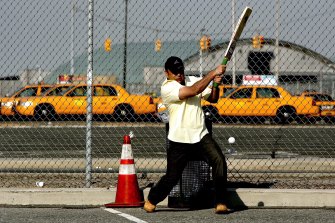 Ex-pats, immigrants and locals who have stumbled upon cricket give it a small but durable presence in the Big Apple.Credit:Getty Images

But he also cherished the ferry and bus rides out of the bustle of the city and into the relative tranquillity of Walker Park, where all the tension and worry of city life seemed to melt away under the languorous pace and familiar thwacks of willow on leather. He took the same route Saturday.

“I was not going to miss this,” he said. “What you find here is a very special bond.”

Sunil Nayyar has been a member since 2015, and said he had never taken a weekend off during the season, which traditionally runs from April through October. Nayyar, who immigrated from New Delhi, scored 50 runs in his first game and has not stopped playing since.

“This is one of the best clubs I have ever played on,” he said. “I love my club the most.”

‘I still love baseball, but I love cricket more.’

The team plays regularly in the Metropolitan Cricket League and the World Series League, two organisations in the New York area, and sometimes travels internationally. As its website notes, members come from virtually every cricketing nation, with strong representation from India, Pakistan, Bangladesh and the Caribbean islands. But the occasional native New Yorker joins, too.

Will Teague, 60, was born and raised in the New Dorp section of Staten Island playing baseball, but after watching a British television program that referenced cricket, he grew intrigued. He found the nearest club and asked to join and learn. That was in April. Three months later he fields sporadically but hopes to bat next year.

“I still love baseball,” he said, “but I love cricket more now.”

While only a neophyte, Teague is a still part of the legacy of a club that hosted international matches with England and Australia, and faced cricketing luminaries like Colin Blythe; Don Bradman, one of the great batsmen of all time; and the great Indian player and prince, K.S. Ranjitsinhji XI. They all played at Walker Park, although a bout of bronchitis kept the prince out of an October 4, 1899 match. The following day, The New York Times reported that “On doctor’s advice, the Prince remained housed at the Waldorf Astoria,” but was expected to play against the Staten Island club the next day. 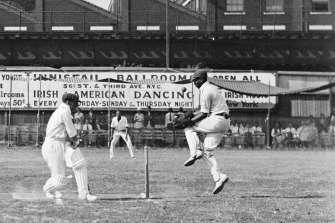 In 1934, the park was renamed after Randolph Walker jnr, a member of the club who died in World War I, and it has been remodelled and renovated around the edges many times, with new tennis courts, basketball courts and a children’s playground.

But the thin strip of sandy dirt where bowlers fire away at batsmen — a rare feature at the city’s parks — is still visible to anyone in the know, and to old friends back for visits.

“Of all the days to come here,” Johnson marvelled. “It brings me back to my childhood in a way. It’s heartwarming to see they still play here.”

This article originally appeared in The New York Times.