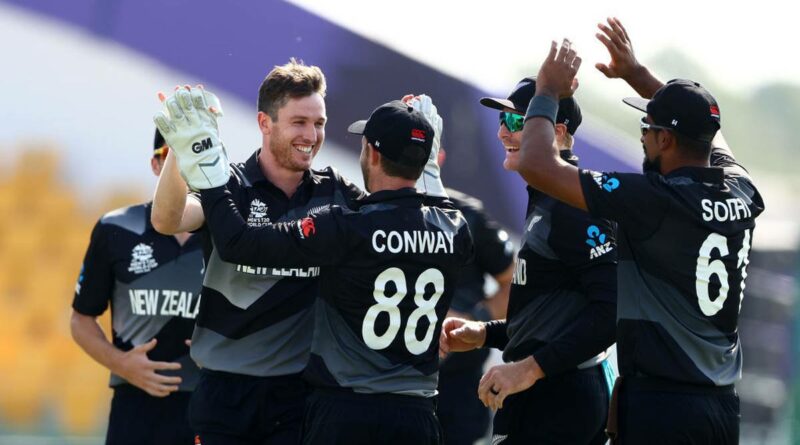 A brilliant seam bowling display has launched the Black Caps into the semifinals of the Twenty20 World Cup.

A comprehensive eight-wicket win over Afghanistan secured a place in the final four for New Zealand, where they will play England on Thursday morning, unless Scotland stun Pakistan this morning.

While England are the world’s dominant white ball side, their semifinal showdown will be played in Abu Dhabi, in conditions it seems the Black Caps seamers rather fancy.

In their first match of the tournament in Abu Dhabi, the quick men came to the fore, combining for figures of 7-82 from 16 overs as Afghanistan were restricted to a meagre 124-8 on a pitch that was far more helpful to batsmen than, for instance, Sharjah.

Conversely, after they had shone earlier in the tournament, spinners Mitchell Santner and Ish Sodhi struggled. Santner was uncharacteristically bashed for 27 from his two overs, while Sodhi’s return of 1-13 from two was slightly lucky, given he got his wicket from a ball that should have been a wide, only for Gulbadin Naib to drag it onto his stumps.

It was that type of batting display from Afghanistan. Of their nine batsmen, only one scored at better than a run-a-ball, and only one passed 15.

However, that one man played one of the best innings of his career.

Najibullah Zadran smacked 73 off 48 balls, contributing 59 per cent of Afghanistan’s runs, and single-handedly giving them hope.

Arriving at the crease in the sixth over with Afghanistan in tatters at 19-3, Najibullah guided them into a position to set a solid target, firstly to 56-4 at the halfway mark, and later taking 19 runs off a Santner over to leave his side at 87-4 with six overs remaining.

His 50 came up off 33 balls, and although Milne, Boult and Neesham slowed down the scoring rate, he was still there with two overs to go, with Afghanistan at 115-5 and hoping to exceed 140.

The first ball of the 19th over, bowled by Boult, went for four, but as Najibullah smacked another delivery down the ground, Neesham was there to take a superb tumbling catch at long-off.

With the danger man gone, just five runs came off the final 10 balls, and Najibullah’s brilliance had been in vain, with their target of 125 especially skimpy when considering the conditions were proven to not be favourable to Afghanistan’s strength – their star spinners Rashid Khan and Mujeeb Ul Rahman.

On his return from injury, Mujeeb managed to remove Daryl Mitchell (17 off 12 balls), but only after Mitchell and opening partner Martin Guptill had again produced a solid start, with 26 off the first three overs.

That would be Mujeeb’s only success, and Rashid also ended with just one wicket, bowling Guptill for 28 off 23 balls, as the Black Caps were always in control, reaching the halfway point at 61-2.

Requiring just over a run-a-ball, Kane Williamson was in no hurry, mixing easy singles with the odd boundary when required, while Devon Conway was seemingly caught behind early in his innings, only for Afghanistan not to appeal.

He took advantage of that let-off, and after a slow start (six off 12), he picked up the pace, hitting Mohammad Nabi for 10 off three balls, and reverse sweeping Rashid for four.

Needing to bowl New Zealand out for under 82 in order to advance to the semifinals, Afghanistan’s spirit waned when the Black Caps went waltzing past that mark, while India, who needed an Afghanistan victory to stay alive, also had to face the reality of an early exit.

Williamson finished with a cool 40 not out off 42 balls, while Conway stood unbeaten on 36 off 32, clipping a Gulbadin delivery for a single to long-on to secure victory with 11 balls remaining.

Afghanistan and India are heading home, and New Zealand are marching on. 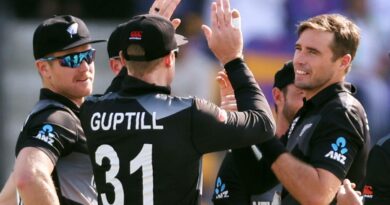