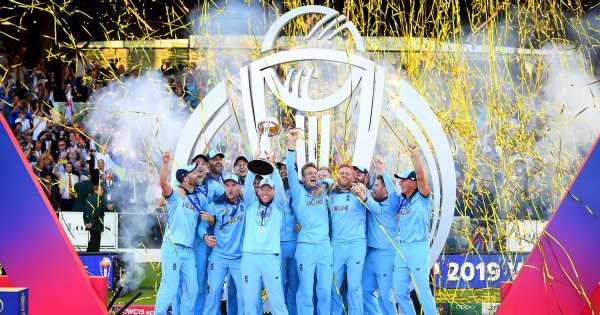 Exactly two years ago today, England's men won the Cricket World Cup for the first time in their history in a thrilling final at Lords which went down to the wire.

Eoin Morgan's side technically drew the game with New Zealand, with both teams making 241 from their 50 overs and also scoring 15 in the resulting super over.

However, England emerged victorious as a result of the boundary count back rule and the win was the result of a major shift in the way they approached white-ball cricket.

Kick-started by captain Morgan and director of cricket Andrew Strauss following England's embarrassing group-stage exit at the 2015 Cricket World Cup, they had embarked upon a four-year journey which culminated in that iconic final at Lords. Morgan and Strauss' vision was clear to see from the off, with the first game of their ODI series against New Zealand coming exactly three months after the 15-run defeat to Bangladesh which sealed England's World Cup elimination.

In the first game, England passed 400 for the first time in ODIs, scoring 408/9 in their innings, with Joe Root and Jos Buttler both reaching three figures.

Rashid also enjoyed an excellent game, scoring 69 off 50 balls with the bat and taking 4-55 from his ten overs as New Zealand were bowled out for 198 in a crushing 210 run win for England. England ultimately won the series 3-2, comfortably chasing down 350 in the fourth ODI and winning the deciding game by three wickets after a magnificent knock from Bairstow.

Ahead of the series, England's interim coach Paul Farbrace spoke of the need to "move our one-day game forward" and the team certainly did that, setting down a marker for how they wanted to approach white-ball cricket.

Under new coach Trevor Bayliss, that aggressive approach continued and England only came up short in the 2016 T20 World Cup final thanks to the six-hitting exploits of Carlos Brathwaite.

Their performances at that tournament were a testament to how far England had come under Morgan and Bayliss in such a short space of time and they continued to break records in white-ball cricket. Later that same year, England made the highest-ever innings total in ODI cricket, 444-3 against Pakistan, a record they broke two years later, scoring 481-6 against Australia.

Heading into the home World Cup in 2019, England were unsurprisingly the favourites, but it was far from plain sailing.

Alex Hales was withdrawn from the squad following a ban for recreational drug use and defeats to Pakistan, the West Indies, Sri Lanka and Australia threatened England with elimination.

However, the return of Roy from a hamstring injury helped inspire England to back-to-back wins over India and New Zealand, as well as a dominant semi-final victory over Australia.

With England peaking at the right time, they met the Kiwis in the final and came out on top after a heroic 84 not out from Ben Stokes and a magnificent super over from new star Jofra Archer. The victory cemented England's credentials as the best white-ball side in the world and saw them lift the trophy on home soil.

Two years on, England are preparing for the T20 World Cup which is set to go ahead in October and November after it was initially postponed due to the coronavirus pandemic.

And England's white-ball prospects look stronger than ever after their depth was severely tested by a Covid outbreak within the camp.

The outbreak forced them to pick an entirely new squad overnight for the ODI series against Pakistan, with Stokes coming back early from injury to captain the side.

The series included a 52-run win at Lords in the second game, England's first ODI at that venue since the World Cup final, and the likes of Saqib Mahmood, Phil Salt, Lewis Gregory, Brydon Carse and James Vince were particularly impressive, despite having just 20 ODI caps between them.

The controversial introduction of the Hundred has seen England's domestic one-day tournament relegated to a "development competition", according to ECB chief Gordon Hollins.

However, the legacy of England's World Cup win will live on for years to come and there is no better example of how Morgan and co. have revolutionised England's white-ball cricket than the recent series win over Pakistan.

The amount of talent England have to choose from in limited overs is scary – a fact their makeshift squad has just proven in emphatic fashion.