Shane Warne has hit out at Matt Prior after the England hero mocked Nathan Lyon following his costly blunder in the dramatic Ashes Test at Headingley.

Lyon had the chance to run out England number 11 Jack Leach and hand Australia the Ashes when the hosts still needed two runs to win.

But the spinner failed to complete a straightforward chance, allowing England centurion Ben Stokes to hit the winning runs in the next over to complete a stunning run chase and level the series.

Prior appeared to revel in Lyon’s misery but Warne has blasted the former England wicketkeeper-batsman for his ‘silly and immature’ tweet.

Responding to Prior, Australia legend Warne tweeted: ‘Excuse me? Just because Lyon knocked you over for fun, there’s still no need for that kind of silly and immature behaviour.

‘Grow up, and enough of those stupid comments. Let’s celebrate the wonderful game of test cricket and the Ashes please!’

The fourth Test takes place at Old Trafford on September 4, with The Oval hosting the series finale on September 12.

Bangladesh stun South Africa with 21-run victory at the Oval 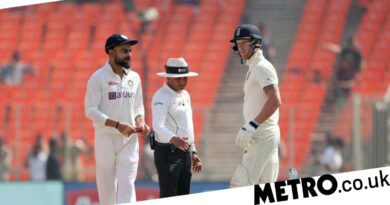