Ashes legend Ian Botham has declared Marnus Labuschagne is Australia’s best player at the moment and revealed a family link to the star Test batsman.

Botham, in Australia as a commentator with Seven, said he had maintained a close eye on Labuschagne, having discovered he had a weekly coffee with Botham’s grandson while the pair was in Wales. James Botham is a Welsh rugby international, and Labuschagne played with county side Glamorgan, the only first-class side based in Wales. 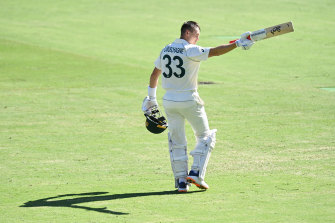 Botham, arguably cricket’s greatest all-rounder, told The Age and Sydney Morning Herald Labuschagne could be the “cherry on the cake” for an Australian side seeking to retain cricket’s most famous prize.

“I think [Steve] Smith is going to have a big part, I think [David] Warner somewhere along the line is going to be a threat and, definitely, Labuschagne,” Botham said.

“Labuschagne is probably your [Australia’s] best player at the moment. I have watched his career. He was obviously playing with Glamorgan in the county championship in the UK. My grandson was also in Cardiff because he plays rugby for Cardiff and Wales. The two of them meet for a coffee, quite often. I didn’t realise this until I caught up with Labuschagne.

“The two of them get on very well, meet up for a coffee and a chat. They are both very competitive, that’s one thing for sure. That rubs off. I am going to watch him with interest in the series. What I have seen of him has really impressed me.”

Botham, 65, said he looked forward to “sitting down and having a cold one with Labuschagne at some stage” through the summer, with Botham here to commentate for the five Tests.

“I like his attitude, his competitiveness. He could be the cherry on the cake for Australia,” he said.

Labuschagne made his Ashes debut in 2019 when he became the first concussion substitute after Smith was struck by a Jofra Archer bouncer at Lord’s. Labuschagne made a fighting 59 in the second innings – he, too, was felled by Archer – and has since gone on to average 60.8 in 18 Tests, with five centuries.

Under the International Cricket Council’s rankings, he is listed as the fourth best batsman in the world, behind England skipper Joe Root, New Zealand’s Kane Williamson and Smith.

Botham’s heroics in the 1981 home Ashes series still haunts his opponents. He also knows what it takes to win in Australia, having been part of Mike Gatting’s victorious 1986-87 touring party.

He made a statement in that series opener, thumping 138 – his 14th and final Test century – to set the platform for victory in Brisbane and the rest of the summer. He said Root’s team also needed “to be competitive from the word go”.

“You have got to be out there, you have got to put your neck on the line. That’s why it’s such a boost to have Ben Stokes back in the side,” he said.

Stokes had initially not been named in England’s squad, having dealt with a serious finger injury and mental health issues. But Botham said the man who gave Australia nightmares in 2019 with the bat – his match-winning 135 not out at Leeds is etched in folklore – will also have a key role to play in his second Ashes series here with the ball, for he can ease the load on veteran seamers Jimmy Anderson and Stuart Broad.

“I hope the Australians write him off, think he won’t do that over here because Ben Stokes … is box office. He loves that responsibility, loves the position he is in and he is a ruthless player, as he has shown on numerous occasions,” Botham said.

Anderson, 39, and Broad, 35, have a combined 1156 Test wickets but have yet to truly master Australian conditions and the Kookaburra ball. Broad will be keen to reprise his dominance of Warner in ’19, for he dismissed the robust opener seven times – all from around the wicket – in the span of 104 deliveries.

Botham, however, had a message for both men.

“The last series means nothing. Stuart Broad may not be the same bowler that he was and David Warner might have sorted himself out with those problems that he had,” he said.

“That will be a fascinating contest. I am sure that England would want Stuart Broad to strike early with that wicket because, psychologically, it sets it up for him. Equally, if David Warner gets a hundred, there you go.”

Botham believes England, battle hardened after a year of Test cricket, have the tools to topple an Australian side that has not played a five-day match since losing to India at the Gabba in January.

“When I got off the plane last Friday and I looked at my phone and looked at the odds over here, I couldn’t believe the odds. I thought: ‘You have got to be kidding me,’” he said.

“It was a little bit like ’86-87 or the reverse, when Australian came to England in ’89 when they were written off. I was thinking, ‘What idiot has come up with these odds?’

“Both sides have a point to prove and everybody wants to prove those points.”