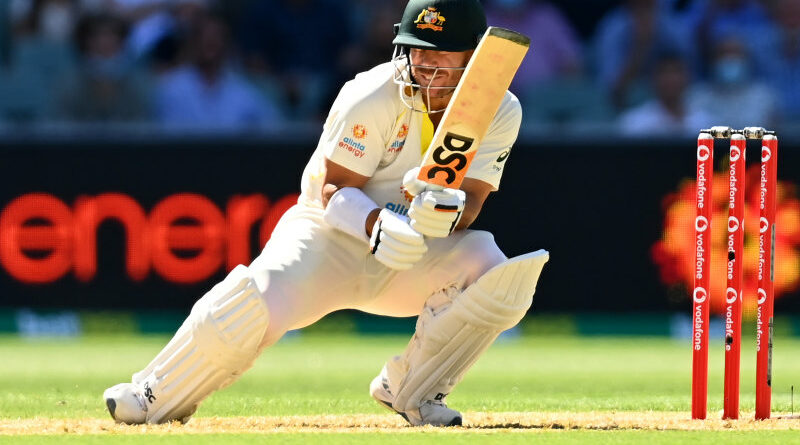 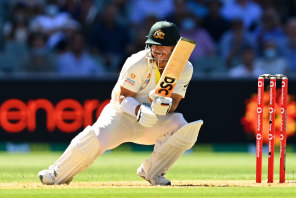 David Warner ducks under a bouncer on day one of the second Test in Adelaide on Thursday.Credit:Getty

Sore and struggling to score after renewed captain Steve Smith won the toss and batted in the absence of Pat Cummins, who was forced to isolate as a close COVID-19 contact, Warner eclipsed his previous tardy best of 44 balls before reaching 10.

Combined with the pain was the persistence of recalled quality pace veterans Jimmy Anderson and Stuart Broad, who started brilliantly after inextricably being left out of the first Test in Brisbane, which England lost by nine wickets in 3½ days.

The ghosts of England 2019, when Broad claimed Warner seven times during a miserable tour, returned before the cheeky veteran seamer had bowled a ball.

“What guard are you taking today? Off stump? Middle stump?” Broad asked Warner for the world to hear via the stump mic as they crossed paths while Broad prepared to begin the second over of the Test.

Broad was asking more questions, this time of umpire Paul Wilson, after his first ball seamed back sharply and hit Warner high on the pads as he raised his arms to leave.

It was rightly called not out on height but Ricky Ponting, commentating for Channel 7, described it as an uncharacteristic leave.

“There are the demons sitting on your shoulder,” Ponting said.

But as tough as he found it, Warner was not the early wicket England craved.

Marcus Harris (3) once again failed to show he can take the leap from dominant domestic batsman to regular Test opener, getting out to one of the worst balls of a tight opening session.

The left-hander instinctively went after a short ball from Broad sliding down the leg side which he gloved. Wicketkeeper Jos Buttler flung himself full length to his right to claim a brilliant, one-handed catch midway through the eighth over.

Harris has a top score of 13 in his last seven Test innings, including five single figure scores.

Australia was four when he departed, a flick through midwicket from Harris for three and a no ball. Warner was 0 from 18 balls.

It took 20 balls and 42 minutes for him to score and even then it came with a misfield from Anderson off his own bowling after Warner defended the ball back down the pitch.

His second scoring shot and first boundary was a crunching cut shot from a wide long hop delivered by Chris Woakes, taking Warner to five from 36 balls and Australia to 1-19 in the 14th over.

It raised the question, what was Woakes doing playing at all on this tour given he has a strike rate of 97 balls per wicket in Australia, about twice that of Mitchell Starc and far worse than any decent bowler.

The muddled minds of the England brains trust have given their most modest seamer the crucial first two Tests while Anderson, Broad and the fastest bowler in the series, Mark Wood, get just one each.

If England had the kitchen sink, Brisbane and Adelaide was the time to throw it to set the tone to try to gain an early lead. Instead, they’ve tossed about assorted bits of plumbing worrying about the future as the present passed them by.

It mightn’t feel like Christmas for Warner with his sore ribs, but it certainly looks like England are handing out presents.

He missed the worst of the conditions in Brisbane when Joe Root decided to bat first, didn’t have to face Broad in Brisbane, when Warner scrambled to 94, and with Wood rested in Adelaide, doesn’t have to worry about the bowler most likely to do further damage to his ribs.

Then Broad tossed up a couple of gifts of his own. Warner reached double figures clipping a full delivery from Broad through midwicket to the boundary and pulled the first ball of his next over for another four.

Warner was finally releasing the shackles which have so rarely inhibited his destructive game.

England v Ireland: Hosts bowled out for 85 in Lord’s Test

Order of merit: Paine wants to stick with top three for summer