Along with Turner's gold on day four, Sarah Edmiston (discus) and wheelchair racer Rheed McCracken both took silver, lifting Australia to fourth on the medal tally with three gold and three silver in total. 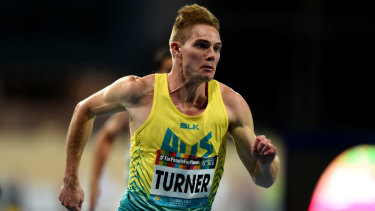 Turner, who qualified fourth fastest for the 100m (T36) final, scorched home in 11.72sec to smash the previous best time of 11.87 set by Mohamad Puzi. 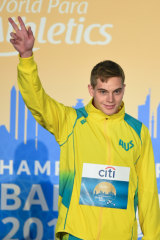 "It feels amazing. It hasn't quite sunk in yet, as it was over so quickly," Turner said.

"I actually didn't know about the world record until the Canadians told me."

For Edmiston, there's a shaft of pain through her right knee every time she throws after she damaged nerves in her leg while waterskiing as a teenager.

But a silver medal in discus (T64) at her first world championships eased a lot of the discomfort.

Her throw of 36.42m on her first attempt put her on the second step of the podium, with China's Yao Juan taking gold.

"It's really good I did that as the competition went for so long, and we were delayed starting (by half an hour), so it was great to get a good throw out there first up," she said.

"The legs got a little bit tired there towards the end but I'm just so happy.

"It's been a really long two years of training."

"It's hard because I feel so happy to be on the podium, and I don't want to sound ungrateful, but I felt I was in really good form this year," he said.

Tunisian Walid Ktila, who pipped McCracken for gold two years ago in London, was again his nemesis.