Chicago: Like any true competitor, Kenya's Brigid Kosgei does not plan to coast on her latest accomplishment – even if that happens to be running the fastest-ever women's marathon.

Hours after shattering Paula Radcliffe's 16-year-old world record, running the Chicago Marathon in two hours, 14 minutes and four seconds, the 25-year-old said she believes any number of competitors could beat her. 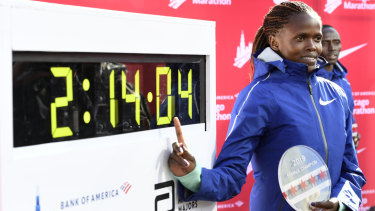 Brigid Kosgei of Kenya poses with her time after winning the Chicago Marathon while setting a world record.Credit:AP

"If a lady can prepare good and they have no injury … they can reduce to reduce to 2:12 or one minute to 2:13," Kosgei told a news conference.

But while she stopped short of pointing to a 2:10:00 marathon for herself, she made clear that her sole goal is getting even faster.

"I'm still focusing to reduce my time again – if it's possible," Kosgei said. "If my body would be good [I could] reduce little by little, slowly."

The 25-year-old arrived in the Windy City as an overwhelming favourite, having won the race in 2018.

Last month she clinched the unofficial best women's half marathon time of 1:04:28 at the Great North Run and earlier this year she became the youngest woman to ever win the London Marathon.

Her confidence showed at the start of the race, when she set an aggressive pace of 3:05.59 minutes per kilometre in the first 5km, causing commentators to fret that she had perhaps overextended herself.

"I was too fast because I wanted to leave the group and focus," said Kosgei. "I come here to run my own pace, I don’t depend on someone."