Home » Athletics » ‘He expects to win’: Peter Bol’s journey to an Olympic final

Tokyo: Peter Bol has spent his life running from something and to something.

On Wednesday night he might reach his goal. Bol will run for Australia in the 800 metres final at the Tokyo Olympics and is a favourite for a medal. 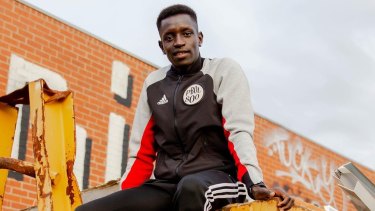 It will be the culmination of a journey that began in Sudan. At the age of four, his family escaped the civil war that would engulf that country for more than two decades. After arriving in Egypt in 1998 his family would wait another four years before emigrating to Australia.

His first experience of Australia was stepping off a plane in Toowoomba in Queensland. He was eight and remembers it vividly.

“It was completely different, it was just nice, even the air was fresh and it was just a feeling – pretty much the same feeling if you just made it to the Olympics – a feeling of excitement,” he told The Age and the Sydney Morning Herald in an interview before the Rio Games.

Bol was a boy in Rio pinching himself at being at an Olympics. In Tokyo, he now has strut, swagger and expectation when he runs. He is not worried about other athletes; he reckons they should be worried about him.

“But mentally he is much better placed,” he said. “He believes he belongs now. He is not in awe of the other guys and wondering if he deserves to be there. He expects to win now.”

Rinaldi said Bol had a great 2019 season before COVID-19 hit. “Winning just builds belief that you will win,” he said. “He goes out expecting to win races now. And he is embracing it. He is not too arrogant, it’s a quiet arrogance that he will win.”

Bol is charismatic and confident. He harnesses his family and his support on social media to drive him. When other athletes want time away from the spotlight ahead of their events, Bol revels in it. Ahead of the Games his 800-metre Australian rival Jeffrey Riseley said he was going to take some time off Instagram.

“I was thinking to myself, I better get off Instagram too,” Bol said on Sunday night after his semi-final win.

“And I’m like, wait, I’m not like that. I got to keep the same thing that I keep doing. I love creating noise, I love creating the hype and I tend to do very well not believe in staying humble and I do perfectly fine.”

Bol was initially recruited on a basketball scholarship from Toowoomba to Perth’s St Norbet’s College but said when he switched to running, he fell in love with it.

The path to Tokyo opened up partly by chance. His St Norbert’s teacher Helen Leahy told 6PR radio in Perth on Monday that she picked him for her athletics squad because she was short a 400-metre runner.

“It’s difficult to fill races sometimes and I didn’t have anyone to run the 400 metres,” she said.

One of the other students suggested Bol could do it. “He brought him back to me and I said, ‘Peter, can you run the 400 metres?’, and he said, ‘how far is that?’ and I said that’s once around the track and he said, ‘yes miss, I can run’.”

“He blitzed it by about 100 metres, it was beautiful to watch,” said Leahy.

Bol said from then on he “fell in love with winning, basically”.

For an individual at the top of his game, he also relies on the team that surrounds him. “I call them the Triple J’s,” he said, referring to his coach Justin, his teammate Joseph Deng and manager James Templeton. 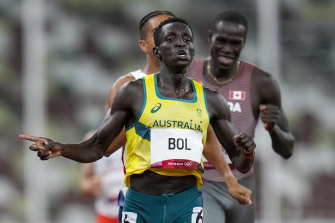 “They are one of the biggest reasons that I’m still running right now.”

His change as an athlete came when he moved from the family home in Perth to live in Melbourne. Deng broke the 800-metre national record three years ago. Bol did it on Saturday night in Tokyo to win his heat, then again on Sunday night to win his semi-final in a showman’s performance.

The last Australian male to make the 800 metres at an Olympics was Ralph Doebell in 1968. He set a new world record which also became a longstanding national record and won gold. The omens are good for Bol.

On Sunday morning, the 27-year-old woke up pumped. He said usually after his heats he would be tired, but he rebounded quicker than he expected.

“I was thinking these guys are going to be in trouble today,” he said.

As he rounded the bend of his 800-metre semi in Tokyo on Sunday more than a dozen family members crammed into his mum’s house in Australia.

There, between the couches and the kitchen, their long-held optimism became ecstasy.

With 100 metres to go, they screamed and bounced, their chants in Perth driving Bol over the line.

Bol had become the first Australian 800-metre finalist in more than half a century.

The seven starters lining up to race against the Australian in Tokyo could be in trouble again on Wednesday.