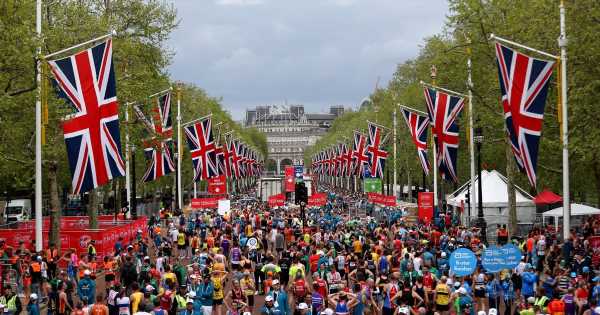 It's that time of year again… actually – it isn't!

The London Marathon is taking place in October rather than April for the 2021 edition as elite and non-elite runners alike take to the streets of the capital to run 26.2 miles.

As well as the men's women's and wheelchair races, tens of thousands of members of the public will run the historic course for a clutch of charities from around the world.

There are always talking points aplenty, and this year will be no different.

Stay with us right here on Mirror Sport for all the latest updates from the London Marathon.

Chris Evans is ready to go

Radio presenter Chris Evans is taking part in the London Marathon this year, and he's brought his short shorts with him.

Weir has dropped back

As expected, after struggling with the initial pace of front-runners Daniel Romanchuk and Marcel Hug, British veteran David Weir has dropped back into the second group as to not expend too much energy all on his own.

But from what we've seen so far in these early stages, it seems a tall order for the 42-year-old to grab his ninth London Marathon title today.

The women's elite race is already well under way, as are the wheelchair races for both the men and women.

At 9.30am the rest of the runners begin their journeys, with both the men's elite race and the general participation event set to begin.

Here's the moment those female athletes began their bid to become the London Marathon champion in 2021.

A couple of long and painful hours lie ahead, but it will all be worth it if they hit their targets this morning.

"The second half is slower, but they are going through the first half very quickly," says BBC commentator Tanni-Grey Thompson about the women's race.

Manuela Schar leads the women's field at the moment.

Daniel Romanchuk and Marcel Hug have begun this men's wheelchair race at a remarkable pace, and have left David Weir all on his own behind.

He's currently in third, but he's all on his own and has no-one to help him close the gap to the front-runners.

Weir won't like it, but he might be better served by dropping back to the second group so they can work together to reel in the two men who have set off at a blistering pace.

The fun runners are on their way…

Plenty of pariticpants and supporters on their way to the start line now!

The women are racing!

Just over 26 miles of open road in front of them, with qualifying times, personal bests and London Marathon glory all up for grabs.

There are half-a-dozen or more athletes here who could conceivably win, so we could be in for an exciting race!

The women’s elite race is moments away

Brigid Kosgei is the favourite here, and is hoping to win the London Marathon for the third year running.

There are plenty of fresher athletes here though hoping the Kenyan Kosgei will be tired from her exertions at the Tokyo Olympic Games.

Natasha Cockram was the first British athlete to cross the line last year, and is back to try to repeat that feat here.

The wheelchair races are under way in Greenwich, with Manuela Schar taking a very early lead in the women's race.

David Weir is at the front of the pack on the men's side of things, and will want to be in full control of what happens over the next 26.2 miles.

The wheelchair races are about to get under way!

The London Marathon is about to begin here, with the first races about to set off.

It's the wheelchair athletes who will kick off the event, setting off from Blackfriars in just a minute or so.

Up against David Weir in the men's race are the likes of Swiss Marcel Hug and American Daniel Romanchuk.

And Nikita Den Boer of the Netherlands is one of the main contenders in the women's competition, along with Tatyana McFadden of the USA and Switzerland racer Manuela Schar.

Representing Britain for the women is Shelly Woods.

David Weir is taking part in his 22nd consecutive London Marathon today, and is hoping to win the race for the ninth time.

The Paralympian has done so much to raise the profile of the sport of wheelchair racing in that time, but feels the BBC could have done more with its coverage to help with that cause.

"Nothing against the BBC but I feel they could have done a bit more on the coverage for the wheelchair side," he said.

"When I won in 2002 I thought ‘I have done it, I have made it’, not money wise, but people would talk about it, there would be more progress. Nothing.

“That’s when I realised there was a massive gulf between Paralympics and able-bodied. After winning a big race like that, I thought I would get a contract from Nike. But it never happened. No phone calls. Nothing.

"The BBC have been there since the beginning and I feel they could do a little bit more. There are options now with the technology – you could have the red button.

"Give people the option to watch the whole wheelchair race. We have a bike camera for most of the race."

‘One of the highlights of my career was winning in London’

Pacing the women's elite race today is Liz McColgan, who famously won the marathon all the way back in 1996.

It's her first time taking part in the London Marathon since 2007, and safe to say she's excited to be back.

"It's an iconic race, and when the crowd is behind you there's no better feeling running down The Mall on your own.

"Some lucky lady and man is going to win it today."

Some celebs to keep an eye out for

As always, there will be plenty of famous faces among the fun runners this morning who will also be raising money and awareness of their chosen charities.

There are plenty from the world of sport, with the likes of rugby league legend Kevin Sinfield, former footballer Stephen Warnock and double Olympic champion rower James Cracknell all pounding the streets this morning.

Ex-TOWIE star Mark Wright has been forced to pull out, though, after suffering a torn calf muscle and being advised by doctors not to compete.

What time does it all kick off?

The racing action begins from around 8.50pm with the wheelchair races, with David Weir gunning for his record ninth win.

And the fun runners will begin at the same time as the men, setting off in waves and probably moving ever so slightly slower than the professionals.

We've seen some brilliant fancy dress costumes from runners in the London Marathon down the years.

From regular fixtures like superheroes and cartoon characters to the more weird and wonderful attempts (bananas in pyjamas?) we've seen some crackers in recent times.

And there will no doubt be more of the same today, with runners hoping to entertain the crowd and those watching at home.

The St Albans Cake – also known as 42-year-old trained research scientist Anna Bassil – is gunning for a new record for the fastest marathon dressed as a sweet food, while Dublin pilot Neil Murphy will, of course, be dressed as a small green plane as he soars around the course.

It's not just the thousands of people running in London today who are raising money for charities – the Virtual London Marathon returns for 2021, with up to 50,000 more covering 26.2 miles from anywhere in the world over the next 24 hours.

And with 40,000 more pounding the traditional course from Blackheath to The Mall, that's up to 90,000 people doing something amazing for a good cause today.

Those competing this morning would have watched the heavy rain yesterday afternoon and evening wondering what they've let themselves in for.

But the good news is they're set to stay dry while they pound the streets of London today, according to the Met Office.

There's a bit of cloud around at the moment but that should give way to more sunny spells later in the morning, forecasters say.

But there's more of a chance of some showers early afternoon, so best get a move on if you don't want a soaking as you cross the finish line!

Good morning and welcome to Mirror Sport's live coverage of the 2021 London Marathon.

This year's edition of the event is taking place in October rather than April, but there will be no fewer thrills or spills on the streets of the capital.

Some of the world's most elite long-distance runners will be in action, as will tens of thousands of members of the public.

There'll be laughs, tears and probably some absolutely ridiculous fancy dress as the eyes of the world descend on London.

So grab yourself a cuppa and keep it right here for latest updates throughout the day. 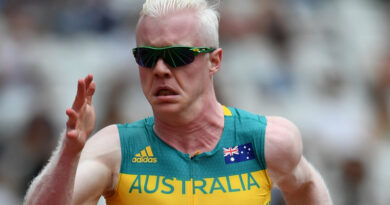 Forget Browning, watch out for the White Tiger in Tokyo