Home » Athletics » Move over Usain: What if Bolt is not the greatest sprinter in history? 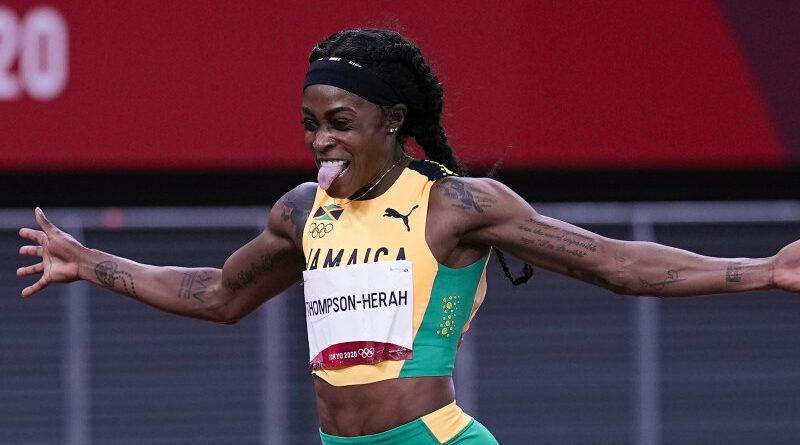 What if Usain Bolt is not the greatest sprinter in history? What if there was someone else better than him – someone currently competing and hiding in plain sight, obscured only by a statistical error that conceals her true outlier brilliance?

It is something that Bolt’s Jamaican compatriot, Elaine Thompson-Herah, might wonder after she stormed to a 10.54-second victory in the 100 metres at the Eugene Diamond League on Saturday, a fortnight after completing a second successive Olympic 100/200 metres double. 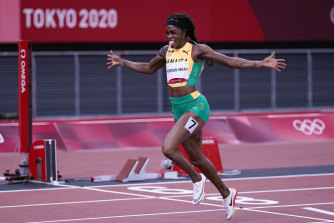 Her time in Eugene was, officially, the second-fastest in history. Yet to almost everyone in the sport, including the revered Track and Field News, it should be considered the world record.

Rarely is Florence Griffith-Joyner’s 10.49-second mark mentioned without an asterisk or caveat of some sort. The primary reason was the wind, or lack of, during Griffith-Joyner’s run. While huge gusts buffeted around Indianapolis on the day of the 1988 United States Olympic trials, the wind gauge flashed up a totally still 0.0 metres per second for her 100 metres heat, even while competitors in the men’s triple jump were aided by tailwinds in excess of 4 metres per second at almost exactly the same time. 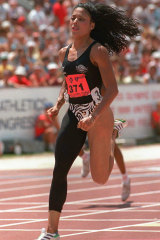 Florence Griffith-Joyner runs at the US track and field trials in 1988.Credit:AP

Subsequent analysis has suggested Griffith-Joyner’s run likely took place with a tailwind above 5 metres per second, far exceeding the legal 2 metres per second limit, and even the governing body’s own statisticians refer to the record as “probably strongly wind assisted”.

There are other, more suspicious factors behind Griffith-Joyner’s time. Having given up on athletics in 1986, she returned to action far leaner and noticeably more muscular the following year, before taking a big chunk off her 10.96-second personal best in the space of a few months in 1988. She claimed her improvement was down to a new training regime and improved diet, rubbishing unsubstantiated reports that she had taken performance-enhancing drugs.

Griffith-Joyner never failed a drugs test, retired after winning triple gold at the 1988 Olympics and died suddenly after an epileptic seizure in 1998. That her 100-metre world record – which was a mind-boggling 0.27 second improvement on the previous mark – still stands is proof enough for the sceptics that Thompson-Herah should be seen as the rightful world-record holder.

Strike a mark through Griffith-Joyner’s 10.49-second run and Thompson-Herah is 0.07 of a second better than any other woman in history. Rule out any other times achieved by Griffith-Joyner in 1988 and the gap between Thompson-Herah and the rest is 0.09 of a second. That margin is almost the same as the 0.11 of a second between Bolt’s 9.58-second world record and the 9.69 seconds achieved by Yohan Blake and Tyson Gay.

There is another statistic that means Thompson-Herah surpasses Bolt. The men’s and women’s 100 metres each have an easily identifiable mark of a world-class sprinter: for men it is 10 seconds and women 11.

Not only has Thompson-Herah gone 0.04 of a second further than Bolt below that respective barrier, but worldwide numbers suggest the female mark might in fact be even tougher than that for men: a total of 117 women in history have broken 11 seconds, while 156 men have gone below 10 seconds.

There is every chance Thompson-Herah will consign Griffith-Joyner’s mark to history at the Lausanne or Paris Diamond Leagues this week, surely cementing her status as the greatest female sprinter in history.

Whether that puts her above Bolt is open to debate. Regardless, it is time the sports world gave her the respect her performances warrant. 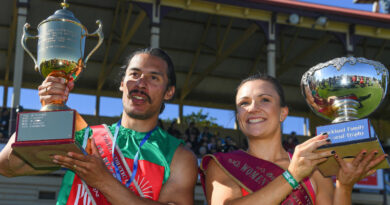 From fashions on the field to a winner’s sash: Ware’s win at Stawell