Rising pole vault star Kurtis Marschall has capped a spectacular return from injury by qualifying for the Tokyo Olympics at the Jandakot Airport Track Classic in Perth.

The 2018 Commonwealth Games gold medallist posted an Olympic qualifying height of 5.80m on his third attempt on Saturday night to secure his second Olympics berth, having competed in Rio four years ago. 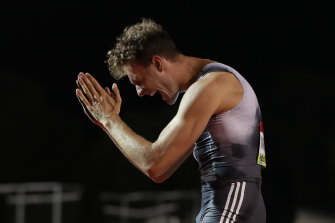 Kurtis Marschall qualified for Tokyo with his third jump of the night.Credit:Getty Images

"I can't describe how perfect that rolled out on the third attempt," Marschall told reporters.

"I can't believe I managed to pull it all together."

It was a stunning comeback for the 22-year-old, who missed the bulk of last year with back and shoulder injuries.

"It's been a rough 12 months and such a long road," Marschall said.

Earlier in the night, speedster Rohan Browning sent an ominous message to his rivals with victory in the men's 100m over in-form Jack Hale and Jake Doran. 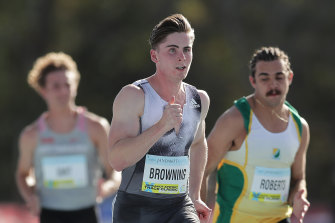 Rohan Browning issued a warning to his competitors on Saturday.Credit:Getty Images

Browning clocked 10.06 seconds but it was achieved with an illegal tailwind of 2.2m. It was still fractionally short of the Olympic qualifying mark of 10.05.

The domestic athletics season continues with the Melbourne Track Classic on Thursday.

Raiola escalates Man Utd row as he takes aim at Solskjaer over Pogba
We and our partners use cookies on this site to improve our service, perform analytics, personalize advertising, measure advertising performance, and remember website preferences.Ok